END_OF_DOCUMENT_TOKEN_TO_BE_REPLACED

If you have recently purchased an Instant Pot or received one as a gift, you may be feeling all kinds of feelings… excited, overwhelmed, maybe a little scared. Don’t panic! It’s completely normal to feel overwhelmed by your new Instant Pot.

Let’s walk through the basics of pressure cookers so you can increase your kitchen confidence and feel ready and willing to conquer pressure cooking! It won’t take long before your pressure cooker will become your new favorite tool in the kitchen!

Also, are you hip to the pressure cooker lingo? Do you know what QR or PIP stands for? If not, be sure to check out my ABC’s of Pressure Cooking page for allllll the terms you need to know to get started on the right foot.

What do all the function buttons do?

One of the first things people say to me when they get a new Instant Pot, is what do all these buttons do? At first glance, it looks like you can just press a single button and walk away. But do those function buttons really work that well?

The same goes for the meat, eggs, beans, grains, etc. buttons. They’re just preset buttons set to high pressure for a specific amount of time. In my humble opinion, they’re fairly useless. In all my time cooking with my Instant Pot, I’ve literally never used them, other than to test what they actually did.

So what functions DO I need?

The only real functions you need on a pressure cooker are the capability to saute, an option to set the cook time yourself (this would be the manual or pressure cook button), and the ability to make yogurt.

So while they’re are new models with plenty of bells and whistles and all sorts of function buttons, don’t be fooled into thinking you need that. In fact, unless you want to make yogurt, a yogurt button isn’t necessary at all.

How to use the Saute Function:

This setting allows you to set the cook time to whatever you like. This is by far the MOST utilized function on the Instant Pot. It allows the pot to cook at high pressure for the time you selected. This means YOU control the outcome!

How to use the Manual/Pressure Cook Function:

Just a note to say that adjusting the pressure from high to low is rarely done. Most recipes you’ll find are designed to be cooked on high pressure. So be aware, because if you accidentally set it to low pressure, the final result will be much different than intended in the recipe.

The yogurt function is only used only to make yogurt.

The yogurt button is able to be adjusted by pressing the “Adjust” button until it says “Boil” or 8:00 or 10:00. This is unique to yogurt recipes.

So if you don’t want to make yogurt in the Instant Pot, ignore that button 🙂

Cooking Time with a Pressure Cooker

Figuring out cook time for a recipe with an Instant Pot is one of the most commonly asked questions when it comes to using your Instant Pot.

It is important to note that just like traditional cooking, you will need to account for altitude if living at higher elevations. 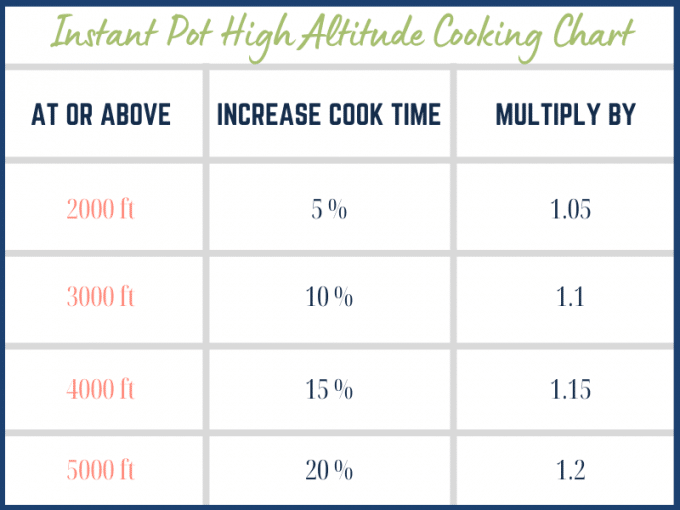 When planning out your meals, note that the pressure cooking time is NOT the full amount of time it will take to prepare the meal.

Pressure cooking requires a build up of pressure within the cooker, and that time can vary depending on the recipe, how filled the pot is, and so on. You also have to factor in the time it takes for the pressure to release.

So when a recipe says that you can cook ears of corn in 1-2 minutes, that doesn’t mean you’ll be chowing down in 1-2 minutes. An average time to come up to pressure is about 10 minutes, so for that corn recipe, you’re look at approximately 11-12 minutes (since it uses a quick release).

As a disclaimer: The amount of time needed for a recipe to come to pressure, and time to release pressure will vary from recipe to recipe.

What Shouldn’t I Cook in an Electric Pressure Cooker?

If you’ve searched the all-mighty internet for pressure cooker recipes, you might be thinking you can cook anything and everything in your Instant Pot! And it’s easy to find all kinds of crazy recipes, for everything from Instant Pot cookies to prime rib.

But while I think the Instant Pot is a FABULOUS appliance and makes SO many things, SO well… it’s just not meant for everything.

Breads and baked desserts just don’t have the same crispy exterior and delicate, fluffy crumb when cooked in the Instant Pot. They’ll turn out very dense and almost TOO moist. Definitely best to leave the baking to the oven.

The Instant Pot cooks with a moist heat, so even if you placed breaded foods on a trivet or rack… they’ll get soggy. The breading may also fall off and cause a burn notice on the pressure cooker.

Given how quickly a good old fashioned burger cooks on a grill, stovetop, or broils in the oven, there’s really no need to bust out the pressure cooker to cook one. Burgers also won’t get the great caramelization that makes them taste so great. They’ll be a steamed meat consistency.

Adding dairy to the pot and pressure cooking can cause the milk or cream to curdle and/or separate. It can also cause your pressure valve to get clogged since dairy will foam at a high temperature.

It also is a very common reason you’ll see a burn notice on your Instant pot.

It is best to add any dairy product, like milk or cheese, to a recipe at the end of the cooking time, and let it finishing cooking (or melting) using the “Saute” function, which we do in this recipe for Chicken Tikka Masala.

Heavy cream can be used in moderation since it has a high fat content and has less of a tendency to curdle, but it can still cause a burn notice if you don’t use it with another liquid, such as broth or water.

Steaks need to be cooked to temperature and have that glorious caramelized crust, and they just can’t get that in an Instant Pot. Cooking an expensive cut of meat like a steak or prime rib in the pressure cooker is the best way to ruin it, unfortunately.