END_OF_DOCUMENT_TOKEN_TO_BE_REPLACED

Sticky, sweet, tangy, and full of flavor… this bourbon mustard and orange glazed ham is one that you’ll be happy to have as the star of your holiday meal!

No more boring, flavorless hams for you… this bourbon, mustard, and orange glazed ham is amazingly flavorful, beautifully marbled, and has a sticky glaze that is out of this world! 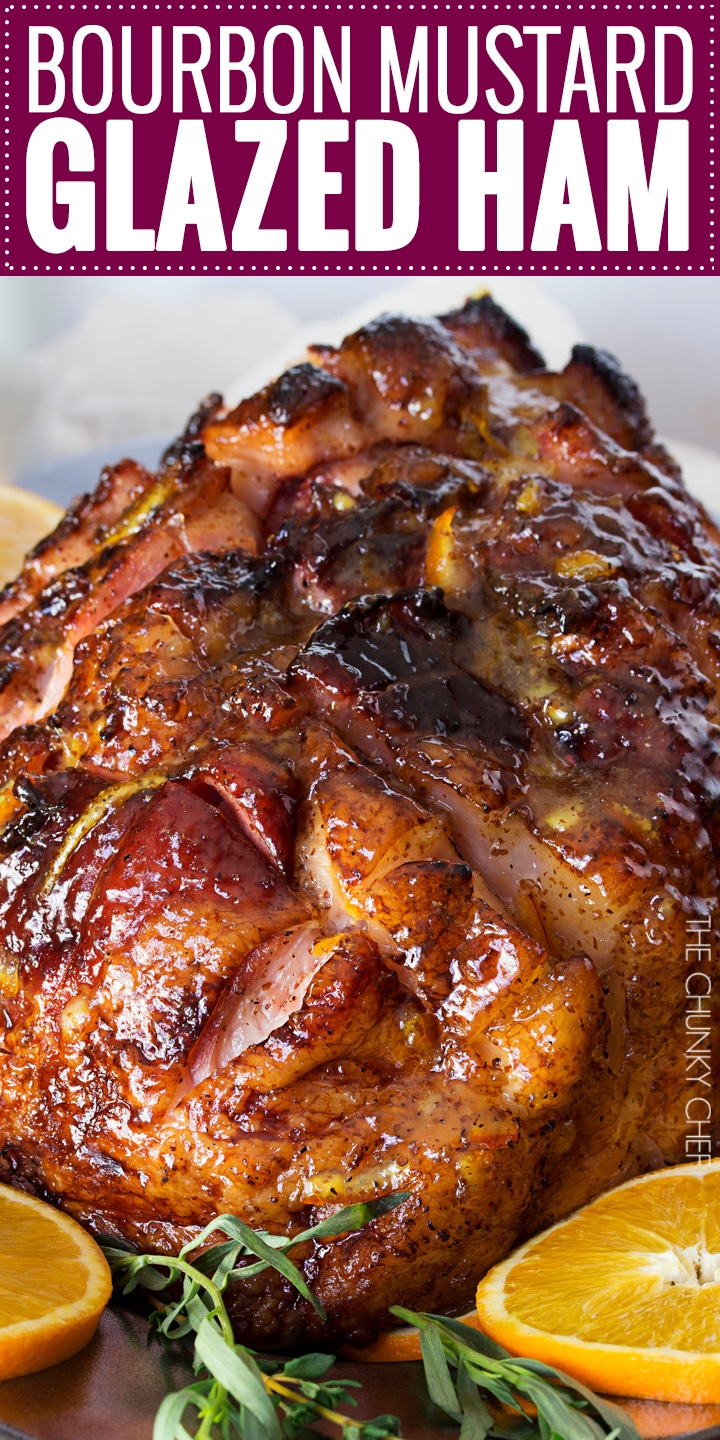 I can’t get over the fact that Easter is in less than 2 weeks… 2 weeks you guys!!  Speaking of Easter, what do you guys do for it?  We usually have a ham, and from now on, I know JUST where I’ll be getting it from! 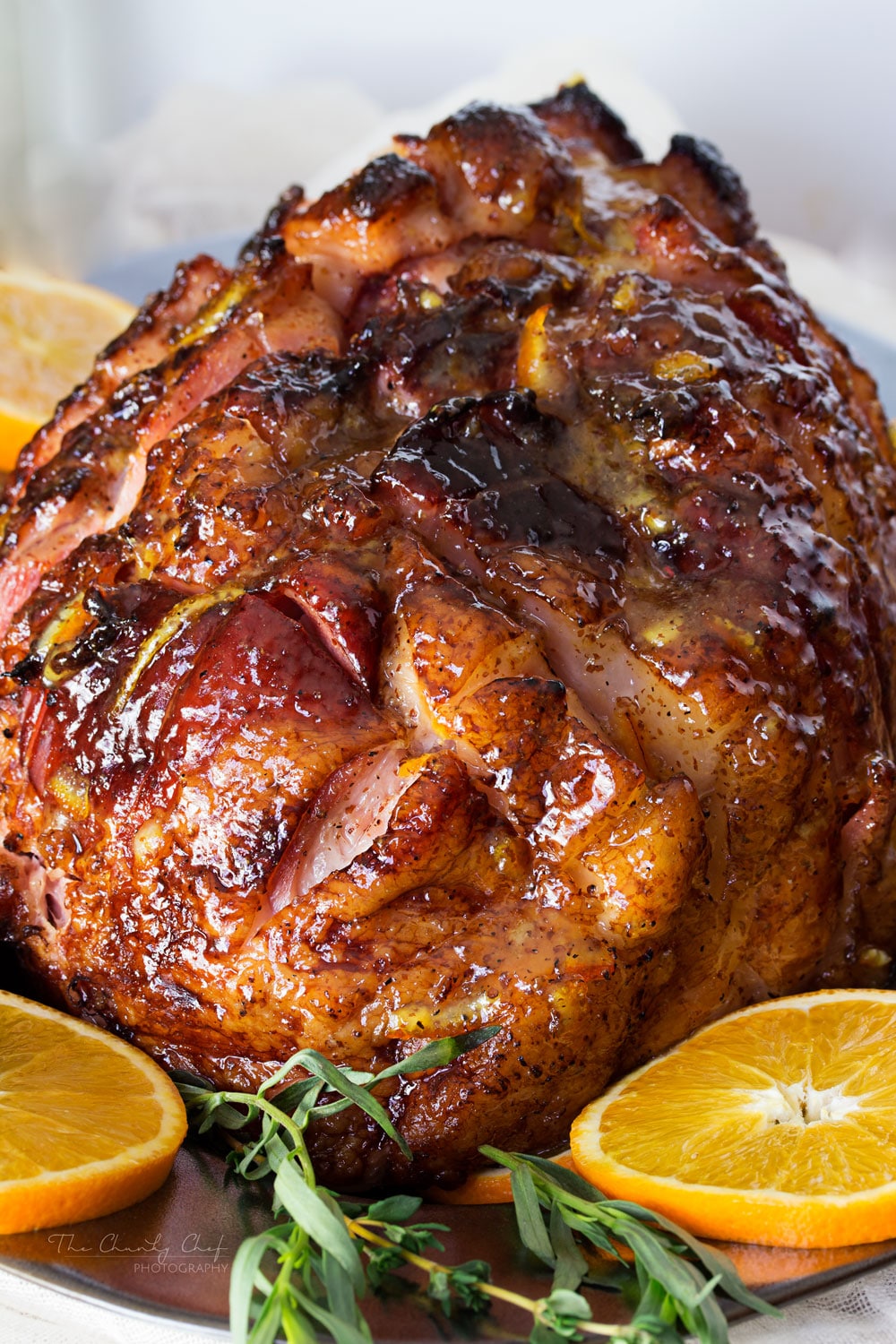 Recently, I was contacted by Snake River Farms, a premier “ranch to table” family owned company providing the finest beef and pork products, to create a recipe using their amazing Kurobuta bone-in ham.

You simply order online and your ham (or roast, steaks, etc) show up at your doorstep, packaged perfectly! 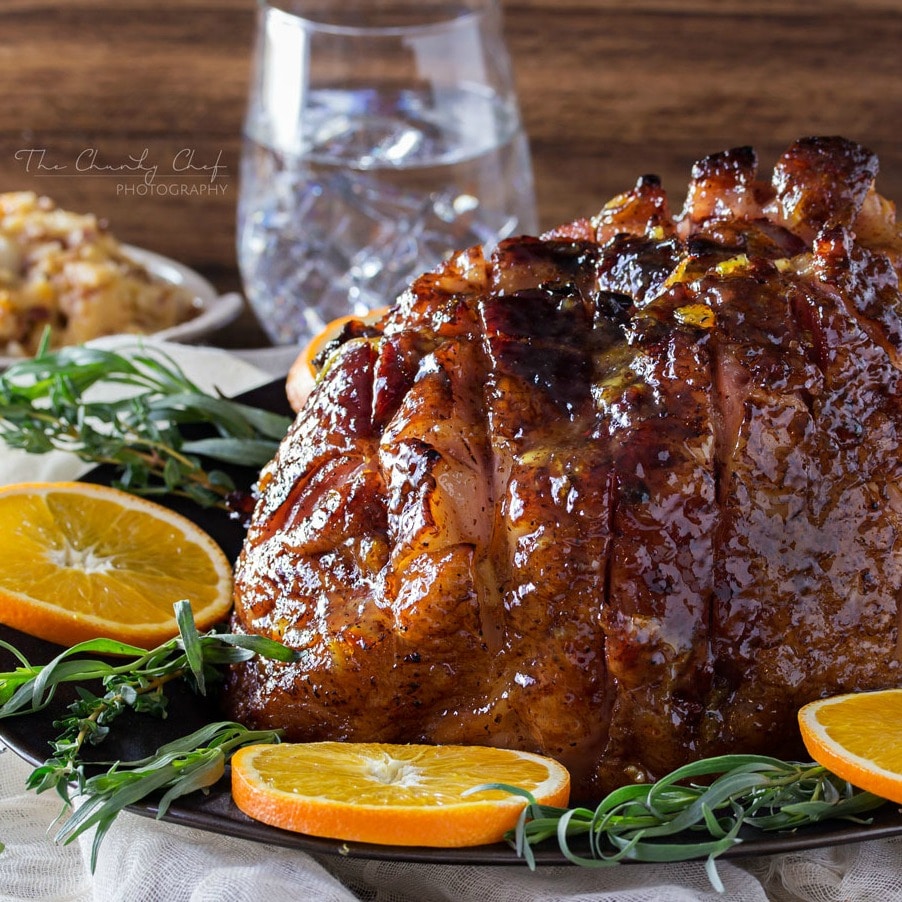 So I mentioned Kurobuta pork… but what IS that?  Kurobuta pork is considered to be equal in status to Kobe Beef.  Kurobuta means “black hog” in Japanese, and refers to animals of the Berkshire variety, which is a heritage breed.  This type of ham has a dark color, firm texture, and a naturally deep delicious flavor.  One bite of this ham and you’ll be able to tell what all the fuss is about! 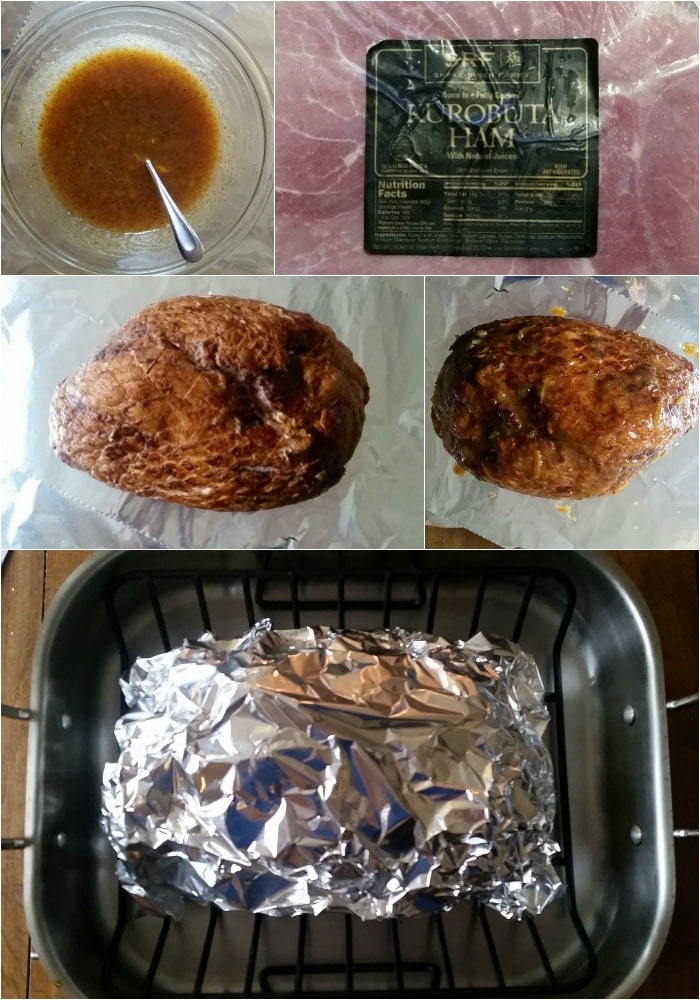 Making a glazed ham is really simple, as the ham comes to you fully cooked and smoked, you’re just heating it up and adding a great glaze.  So don’t be intimidated here 🙂 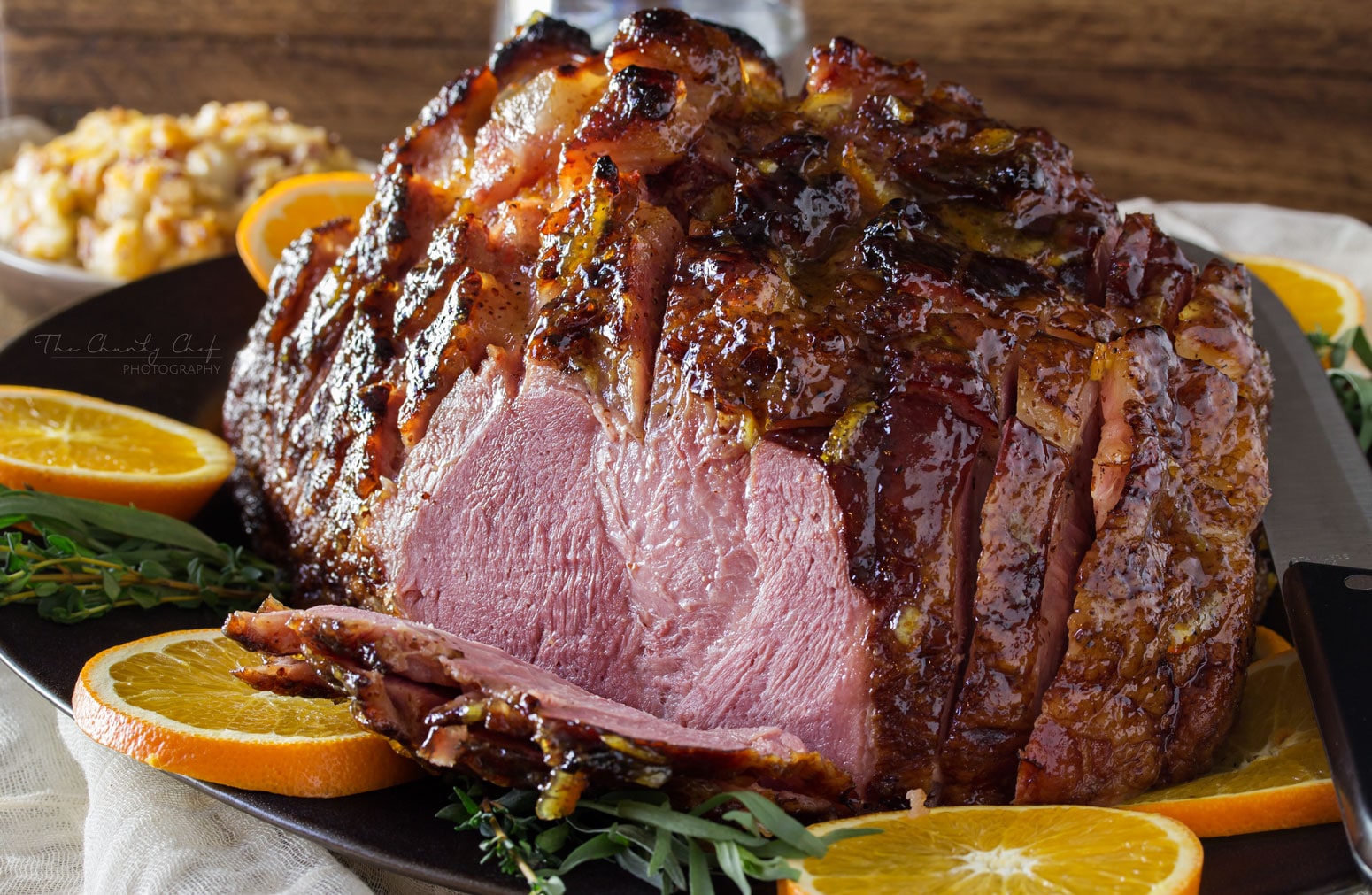 Imagine the “oooooh’s” and “ahhhhh’s” when you set that beautiful ham down on the table!!  As if that crazy flavorful glaze isn’t enough, I’ve also created a delicious mustard sauce to serve alongside, which is great with slices of ham, or on a ham sandwich using leftovers!

If you’re looking for ideas on what to serve alongside this glazed ham, I like to serve my Horseradish Mashed Potatoes, Brussels sprouts with toasted Hazelnut Butter, some of my Mom’s Corn Pudding, or these fluffy One Hour Dinner Rolls.  For dessert, well, you can’t go wrong with these red velvet brownies (easy to customize to any holiday!), or my Mom’s famous carrot cake! 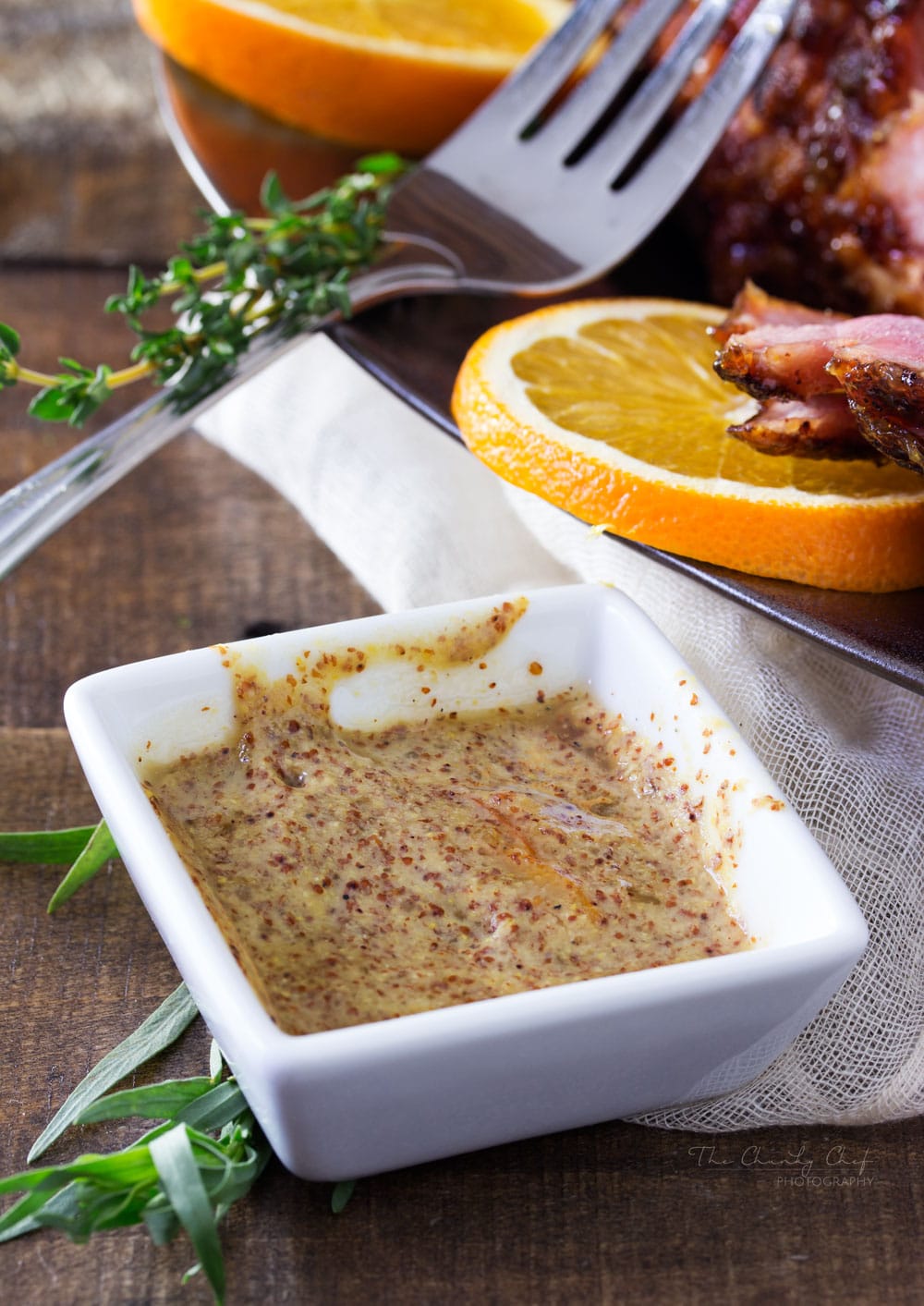 Trust me when I say that you’ll be wanting this ham for MORE than just holidays… we like to have hams as a weekend meal, and then snack on the leftovers for lunches throughout the week.  Give this one a try you guys, I know you’ll love it 🙂 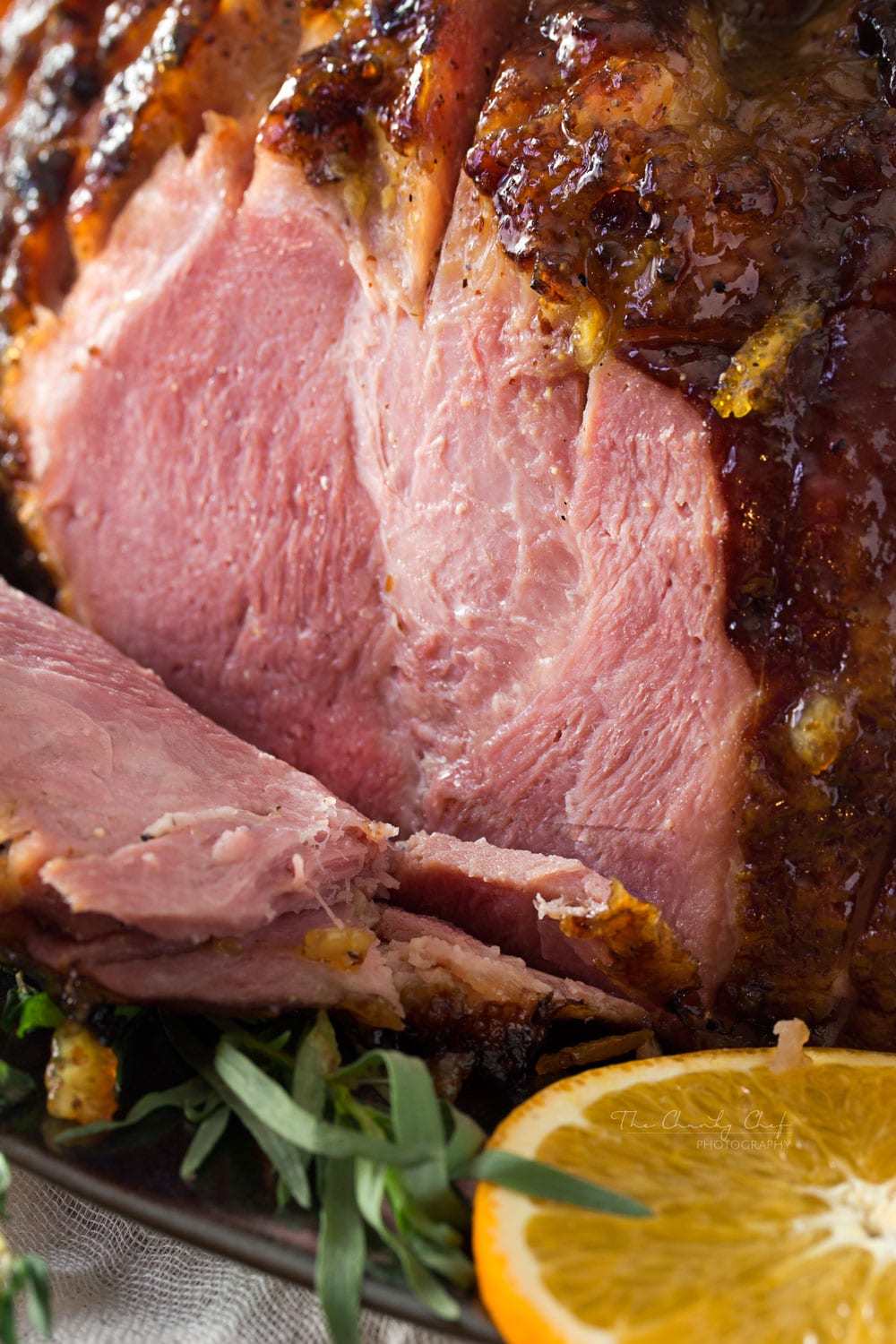 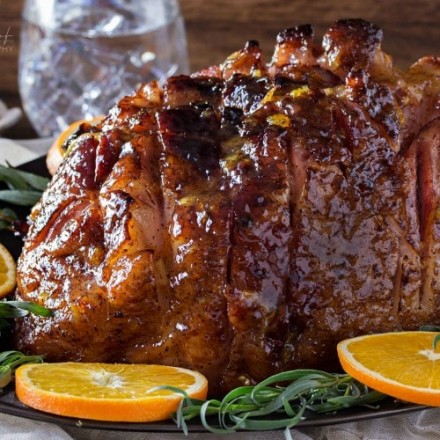 5 from 23 votes
Author: The Chunky Chef
Prep Time: 15 minutes
Cook Time: 2 hours 30 minutes
Total Time: 2 hours 45 minutes
Calories: 159
Servings: 24 servings
(hover over # to adjust)
Print Rate Pin
Sticky, sweet, tangy, and full of flavor... this bourbon mustard and orange glazed ham is one that you'll be happy to have as the star of your holiday meal!

TO PREPARE SPIRAL SLICED HALF HAM:

This is a sponsored conversation written by me on behalf of Snake River Farms. The opinions and text are all mine.