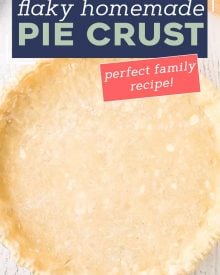 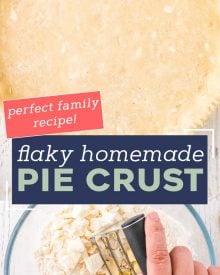 Learn how to make the most incredible and flaky pie crust!  Once you make this pie crust from scratch you’ll never want to use those pre-made crusts again.  Save this recipe for every holiday!

This is the first of a series of recipes here on the site that I’m calling “Back to Basics“.  In this series you’ll find recipes that are common building blocks for beginner cooks, as well as homemade versions of pantry/store-bought staples, such as hot sauce, condensed soups, stabilized whipped cream, etc.  With easy to follow instructions, detailed notes, and step by step photos, you’ll be on your way to being a master in your kitchen in no time! 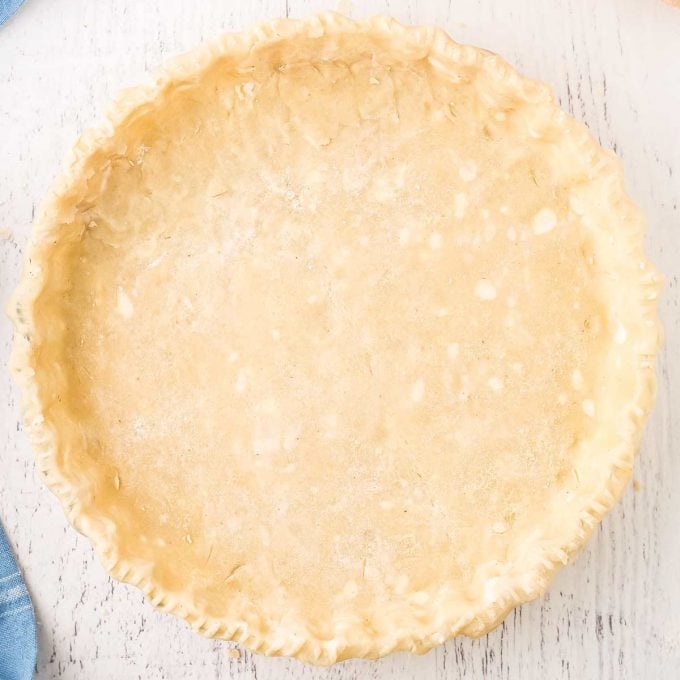 Making a perfect pie is one of those things that even seasoned bakers can have trouble with.  And a lot of the problems and frustrations are from making the pie crust.

Speaking of pies, did I ever tell you guys about the time I made pecan pie “soup”?  I have to tell you… and it’s embarrassing, but hopefully will help you guys understand that EVERYONE has had a baking fail or two in their time.

About 8 or 9 years ago, I decided I wanted to bring the pecan pie to our family Thanksgiving.  Now keep in mind that my Mom makes an AMAZING pecan pie, so I already had some big shoes to fill, and I had never even attempted pie before.  Go big or go home right?  Instead of trying to make a crust from scratch, I figured I would buy a frozen one and no one would even know.  Except I didn’t know that I’d have to thaw it before baking….

I made the filling according to my Mom’s recipe and was so excited as I slid it carefully into the oven.  When the timer went off, I went to check it… so excited to see the final result.

It. Was. Liquid.  NO part of it was cooked.  Frantically, I called my Mom and she assured me the baking time was right, and to try 10 more minutes.  No go… still soup.  When I confessed to her that I’d used a frozen pie crust (unthawed), we figured out that was the culprit.

I baked and baked and baked it, and eventually got the edges to resemble a baked pecan pie, but the center was still essentially… pecan pie soup.  I will NEVER live that Thanksgiving down, but I also won’t make that mistake again lol.

So since then I’ve been on a mission to master the art of the pie crust… determined to be able to make a great pie.  A lot of failed attempts later, I’ve finally got it… and I’m sharing both the recipe, and all the tips and tricks that I learned along the way. 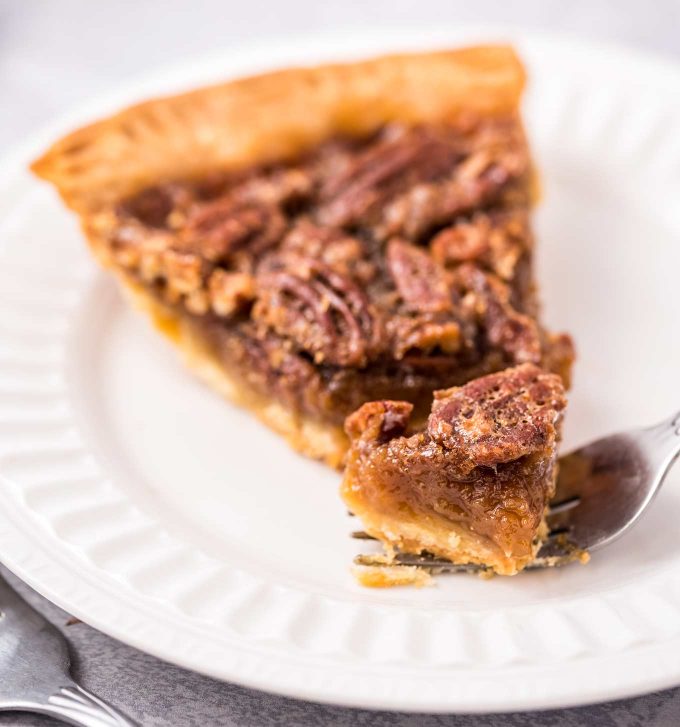 HOW TO MAKE HOMEMADE PIE CRUST

We’ll go through the step by step process below, complete with plenty of info and pictures 🙂

Try not to let pie crusts scare you.  I’m convinced they can smell fear lol.  Okay not really, but I do think having a positive mindset can help quite a bit.  In all honesty, making the perfect pie crust just takes practice.  And practice takes time. 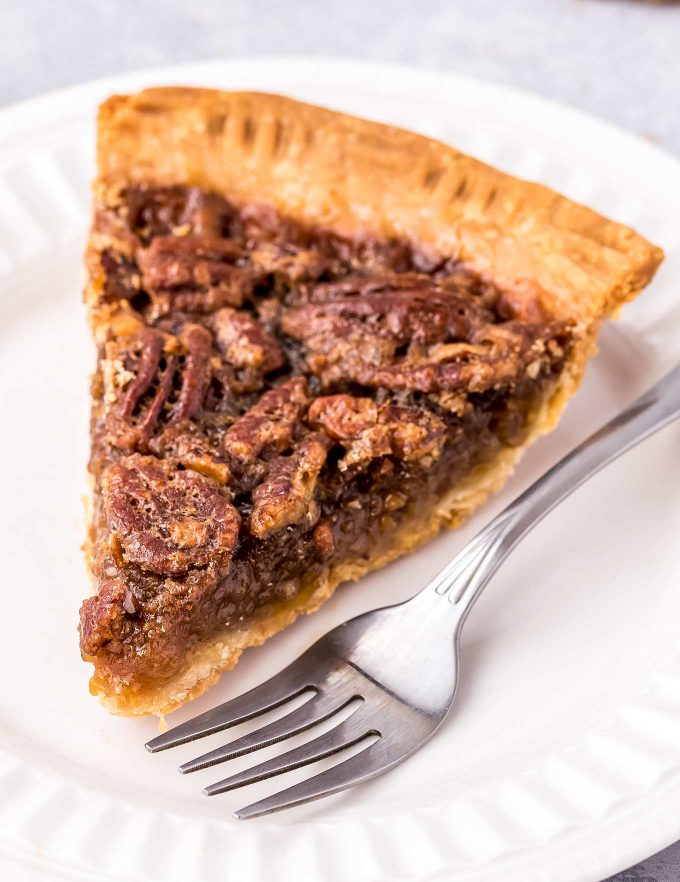 Okay, this is gonna get pretty wordy.  I promise I’m not trying to make pie crusts super complicated or scare you off… I just want to be as thorough as possible for you 🙂

At it’s core, pie dough is a simple 4 ingredient formula.

The type of fat used is usually a big debate among bakers!  Lard, butter and shortening are the main types.  Lard is harder to come by nowadays, so I never use it.

So why use one over the other?

Back in the 50’s, shortening came about as a shelf-stable alternative to butter, and quickly rose in popularity among bakers.

As you can see, there are pros and cons to both!  For me, and for this recipe, I prefer a mixture of both shortening and butter.  Shortening for the ease and shape, and butter for the flavor and puffy flakiness.

However, when I’m craving some nostalgic flavors, I whip up a pie made with all shortening, like my Great Grandma used to make (and Mom still makes).

I’ve heard, but not tested this myself, that pastry flour makes an unbelievable pie crust.  This makes sense because pastry flour has a lower protein content, which means less gluten is formed, which makes a tender crust.

However, most people don’t have pastry flour just laying around in the pantry, so I prefer to use all purpose flour.

MAKE SURE THE FAT IS COLD 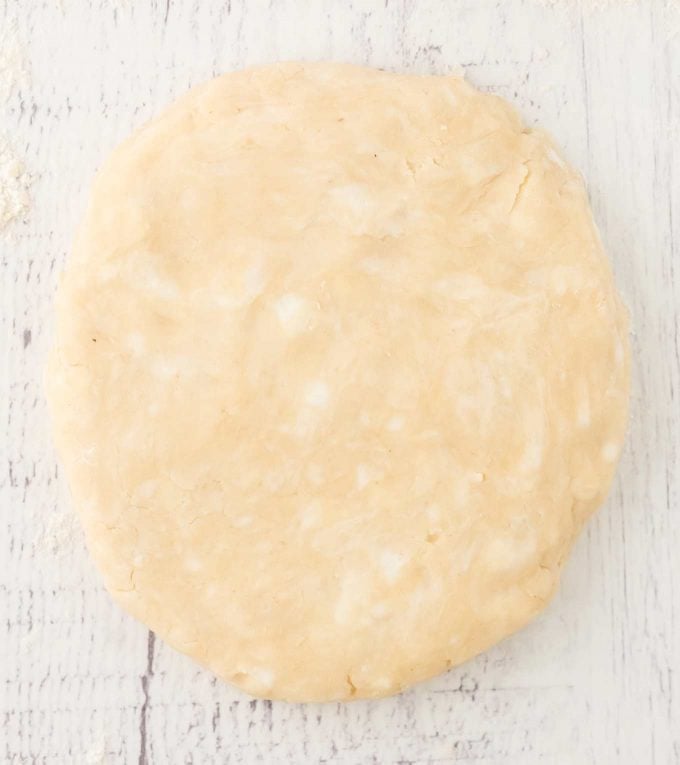 When making a homemade pie crust, you want things to be COLD.  Cold fat (whether it’s butter, lard, or shortening), is crucial.  See those white specks in the dough pictured above?  That’s a very good thing!

Those pieces of fat melt in the hot oven, creating steam which creates layers in the dough, making the crust super flaky.

If the fats are warm when they go into the oven, you’ll end up with hard, crunchy and crumbly crust instead of a light, flaky one.

In fact, once I’ve made my crust and it’s in the pie pan, I refrigerate the pan while I make the filling, so it’s as cold as can be when it goes into the oven.

HOW TO MIX THE DOUGH

Remember to start off with cold fats.  Mix the flour and salt together, then add the cubed, cold butter and shortening.

Use a pastry cutter to cut the fat into the flour, using a downward motion.  Twist the cutter, then repeat the motions, over and over, working quickly, until the flour looks coarse, with pea-sized lumps.

Add the ice water, just 1 Tbsp at a time, stirring after each addition, until dough comes together and clumps form.  The photo above is after the clumps have been stirred.  You should be able to grab a clump, give it a squeeze and have it hold it’s shape and not immediately crumble everywhere.

Turn the dough out of the bowl onto a lightly floured surface and use either your rolling pin or hands to form it into a roughly 1″ thick disc.

Wrap it tightly with plastic wrap and refrigerate for at least 2 hours, or up to 4-5 days.

WHY YOU HAVE TO CHILL THE DOUGH

I get it, it’s likely the holidays and the last thing you need is to wait around for pie dough to chill.  But I promise, it’s for some very good reasons!

The good news is, pie dough freezes well, so you can make dough ahead of time.

HOW TO ROLL OUT THE DOUGH

Once the dough is chilled, it will likely be too cold and hard to roll out easily.  Let it sit at room temperature for 5-10 minutes.

Make sure you’ve floured your work surface (I just use my island) so the dough doesn’t stick.  Sprinkle the top of the dough and the rolling pin with flour as well.

Then start in the center of the disc of dough, and gently roll from the center outwards, in all directions.  Pick up the dough and turn it a quarter turn (90°) as you go.

Picking up the dough and turning it ensures the dough won’t end up stuck to the surface, and helps keep it in a more even circle.

You’ll want to roll the dough out to be larger than the pie pan by about 2-3″ on each side.  So for a 9″ pie pan, you’d want to roll it out to be about a 12″ circle.  This way you have enough to cover the bottom, cover the sides and gives you enough for a decorative edge and/or excess dough to patch any cracks and rips in the dough.

HOW TO TRANSFER THE ROLLED OUT DOUGH

So once you have this beautiful rolled out pie crust, how do you get it IN the pie pan?  Well there are two main ways.  I prefer method #2, but both work well. 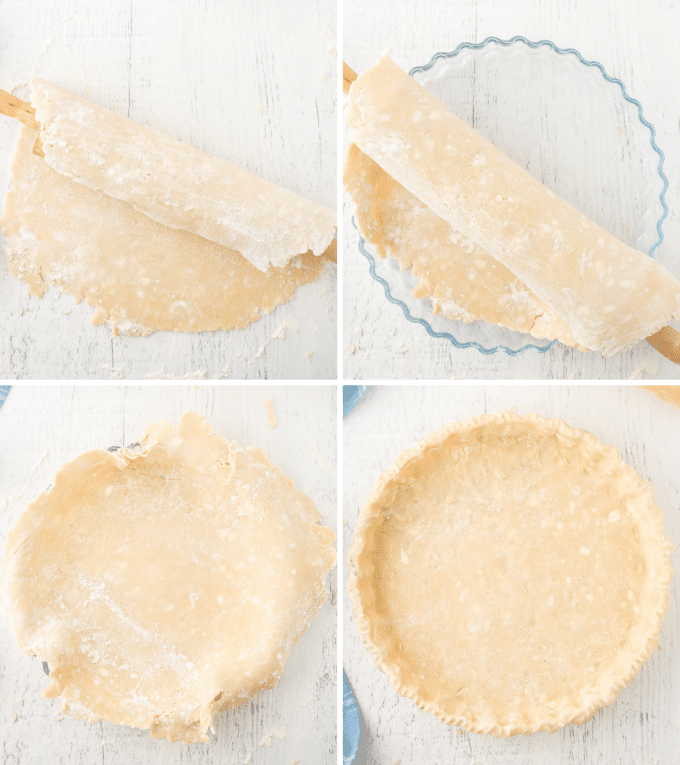 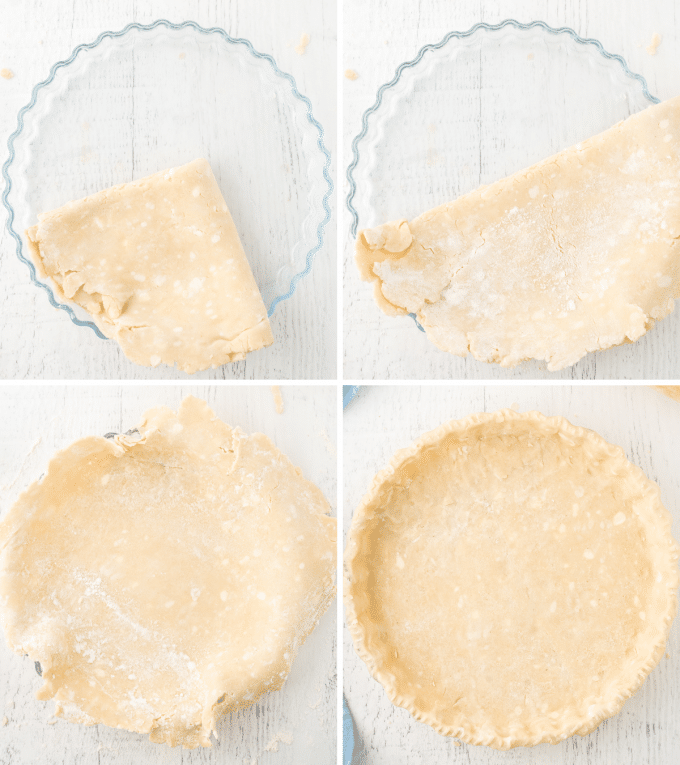 FIXING BREAKS AND CRACKS IN THE DOUGH

Don’t worry if your pie dough has some breaks/cracks/rips in it once you get it transferred to the pan.  It’s so easy to fix!

Since you rolled the dough out to a circle bigger than your pan, you’ll have excess dough.  Just tear off a piece of the extra dough and use your fingers to patch the ripped area, pressing and smoothing it out.

No one will even know once the pie is baked 🙂

You’ll likely have excess dough hanging over the edges of your pie pan.  I like to trim mine so there’s about an inch hanging over, then fold that overhang under itself so it’s about flush with the edge of the pan.

Then either crimp, use a fork, use a spoon, or decorate the edge however you like.

Food52 has a great post with tutorials on various decorated pie crusts! 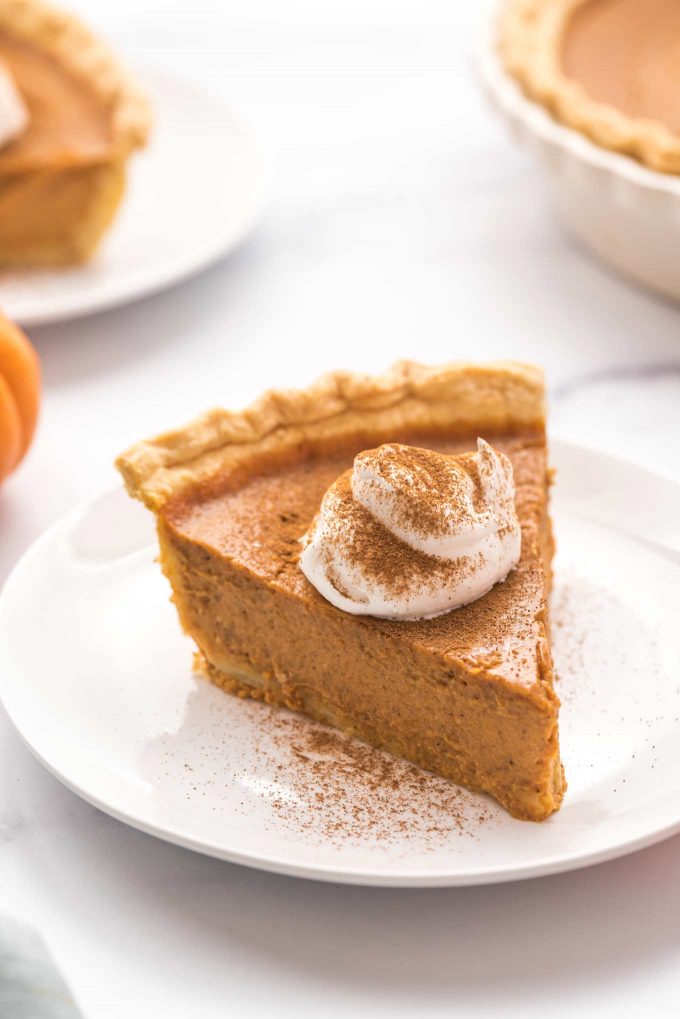 MAKING PIE CRUST AHEAD OF TIME

I love pie crust because you HAVE to make it ahead of time.  So not only is it great for make ahead desserts, it forces me to plan ahead lol.

The reason you have to make the dough ahead of time is so it can chill. As we learned above, the fats in the pie dough have to be cold in order to create those wonderful flaky layers.

Pie dough discs can be stored in the refrigerator (wrapped tightly) for up to 4-5 days!  You can also freeze tightly wrapped pie dough for up to 6 months.  To get the longest shelf life out of frozen pie dough, I wrap it tightly in 2 layers of plastic wrap, then seal it in a freezer bag.

The following links are affiliate links.

The Chunky Chef, LLC is a participant in the Amazon Services LLC Associates Program, an affiliate advertising program designed to provide a means for sites to earn advertising fees by advertising and linking to amazon.com.  For more information regarding this program and what it means for you, please see my Privacy page. 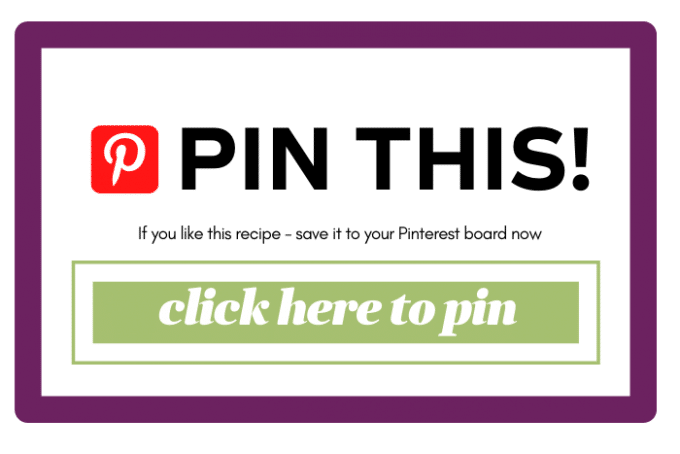 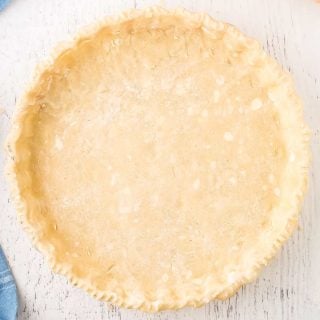 FORM DOUGH INTO A DISC 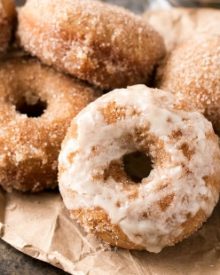 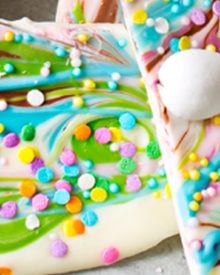 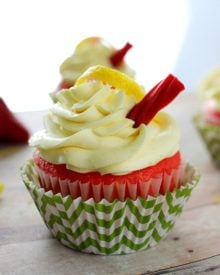