This light and deliciously creamy homemade eggnog can be made in just 5 minutes in your blender!  Nothing hits the holiday spot more than a cup of eggnog!

Forget the preservative laden cartons of eggnog from the store… homemade is the best!  All you need is 5 minutes of your time and a blender.  My version mirrors the classic, with raw eggs, cream, milk, and booze, but I’ve also shared a way to make it using cooked egg yolks if you’d feel more comfortable that way. 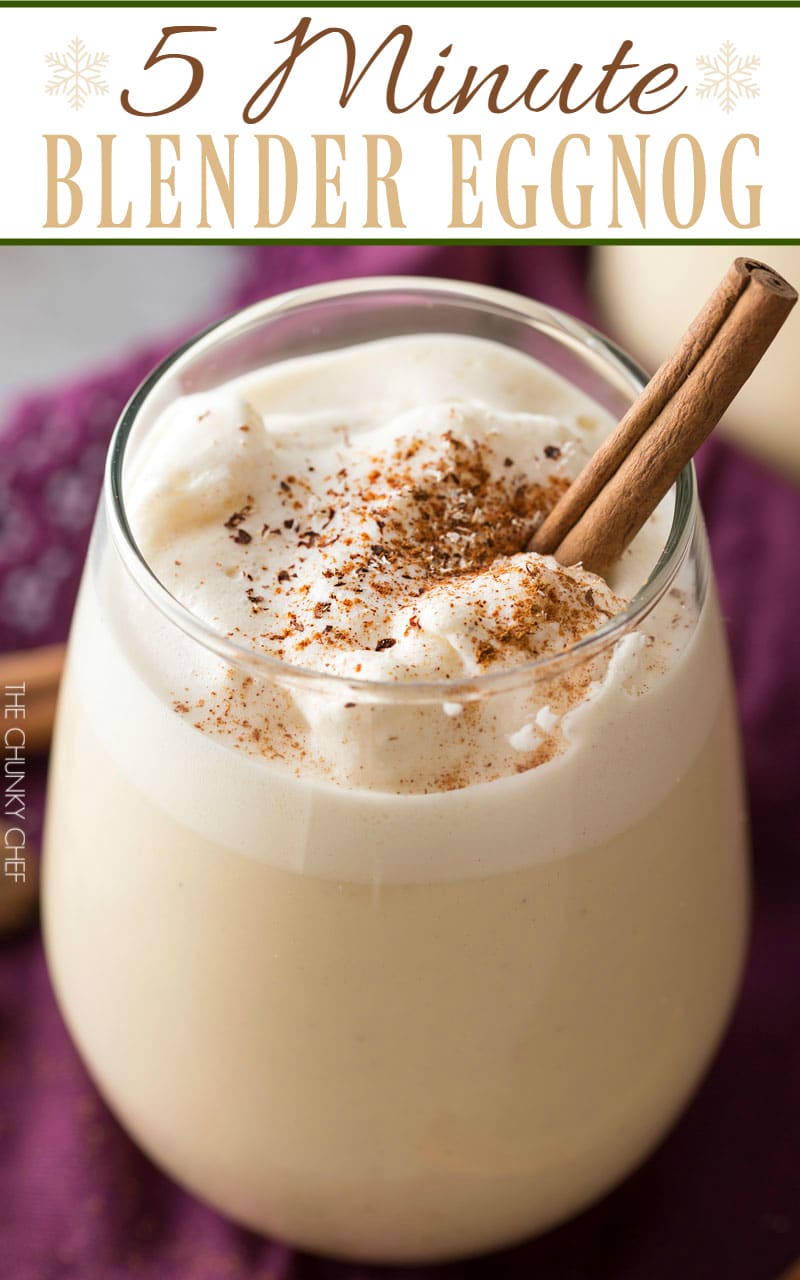 You’ve had eggnog before right?  It starts popping up in the refrigerated cases at grocery stores during the Fall around here, in those infamous cartons.  Store-bought eggnog is SUPER thick, like the texture of thick, melted ice cream, and mildly spiced.  The other thing in that store-bought carton is a lot of additives and preservatives, used to make it that thick and ensure that it has a long shelf life.  Which is all well and good, but we all know homemade has got to be better right? 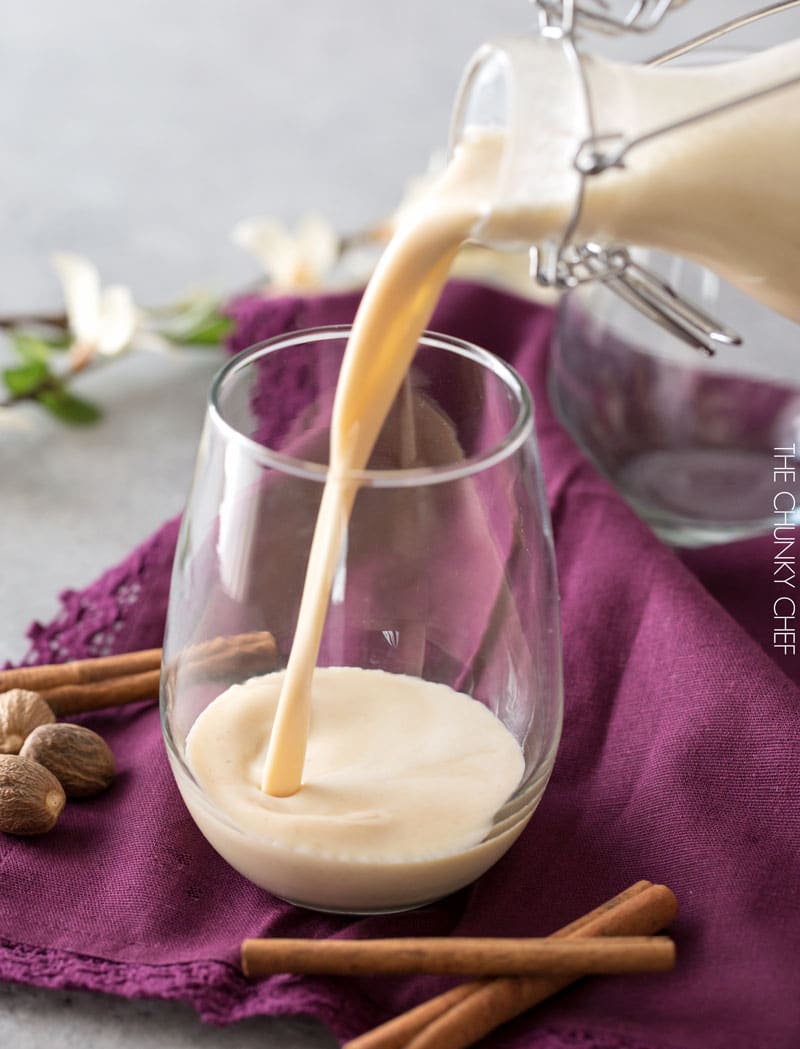 Except I always thought that something as complex in flavor as eggnog had to be complicated to make, so I never bothered.  Well folks, I finally tried it, and I’m here to tell you… it couldn’t be EASIER!

If you search “eggnog” in Google, you’ll see approximately 2.67 bajillion recipes (okay so that might be an exaggeration… but seriously, there are a lot!), and there are several ways to make it.  I’ve gone with the classic way, which does use raw eggs.

Raw. Eggs.  Did I lose you there?  For most people, the thought of drinking raw eggs is… well, not pleasant, right?  You probably have a little voice in your head going, “um, crazy lady, you can’t eat raw eggs… you’ll get salmonella!!”.  Well, yes, and no.  Classic eggnog is boozy, with a quite a bit of alcohol added, which essentially acts as a preservative and a sterilizer.  There aren’t many bacteria that can survive in alcohol, including the dreaded salmonella.  This was actually proven at a lab in Rockefeller University. 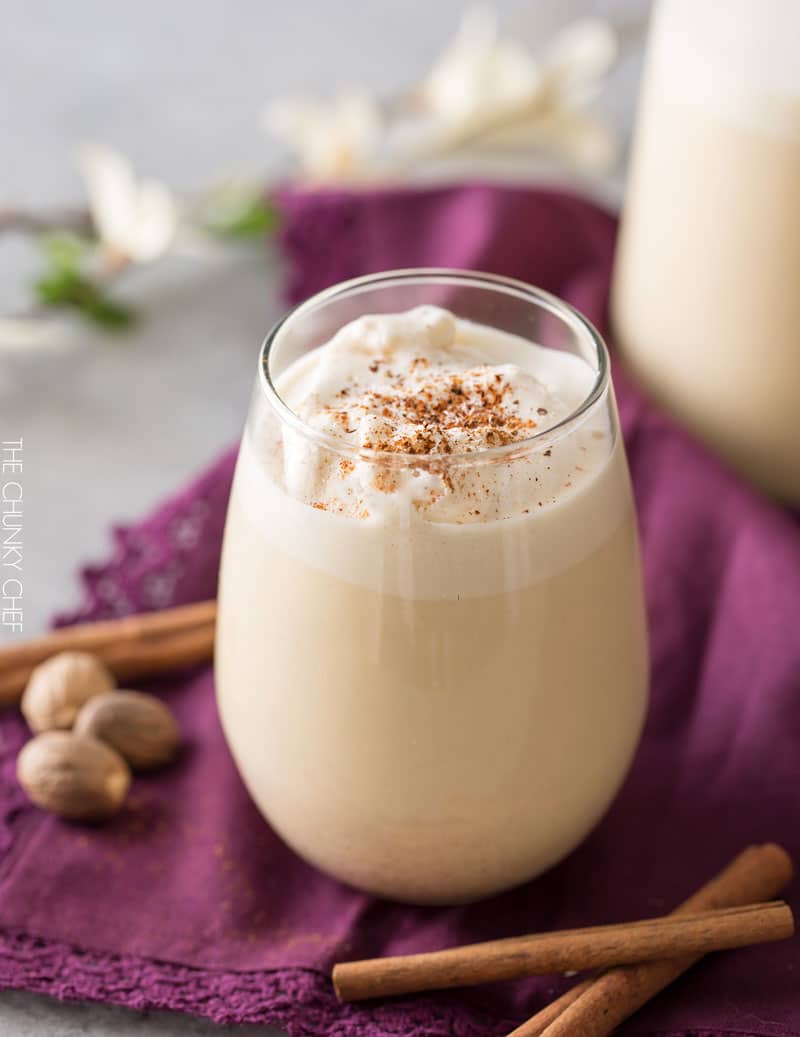 There are a few ways you can give yourself some extra security with using raw eggs: 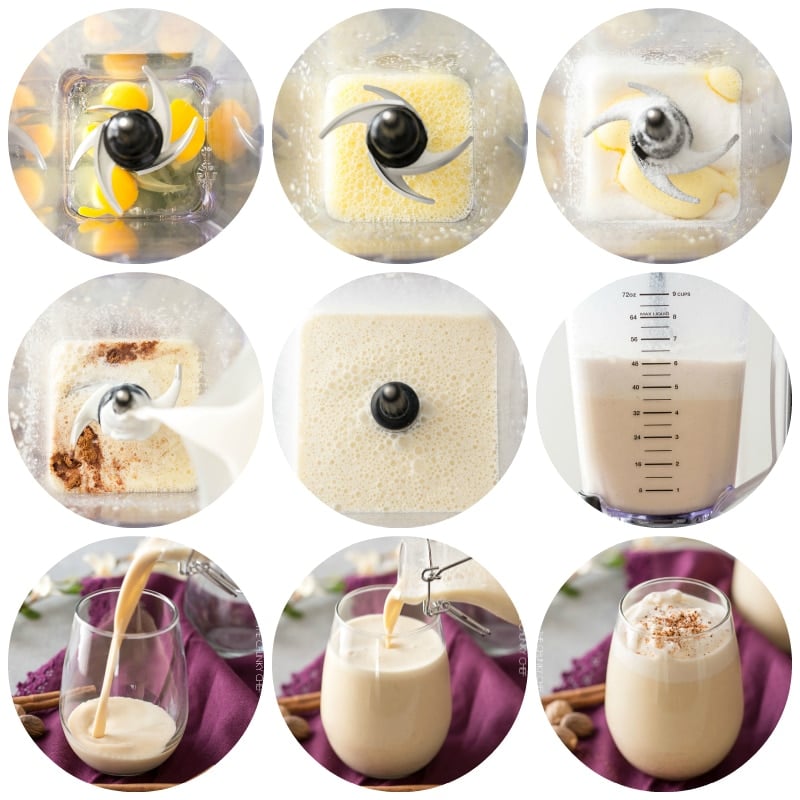 Making this version of homemade eggnog is the simplest one around… no saucepans, no tempering egg yolks, no whipping egg whites, and just one thing to wash after you’re done!  Just add your raw eggs to the blender and blend on medium speed (or low, if your blender only has a high and low speed) for about 30 seconds or so.  Add the sugar and blend again for 15-20seconds.  Add in spices, alcohol, milk and cream and blend until combined, about another 10 seconds.  That’s it! 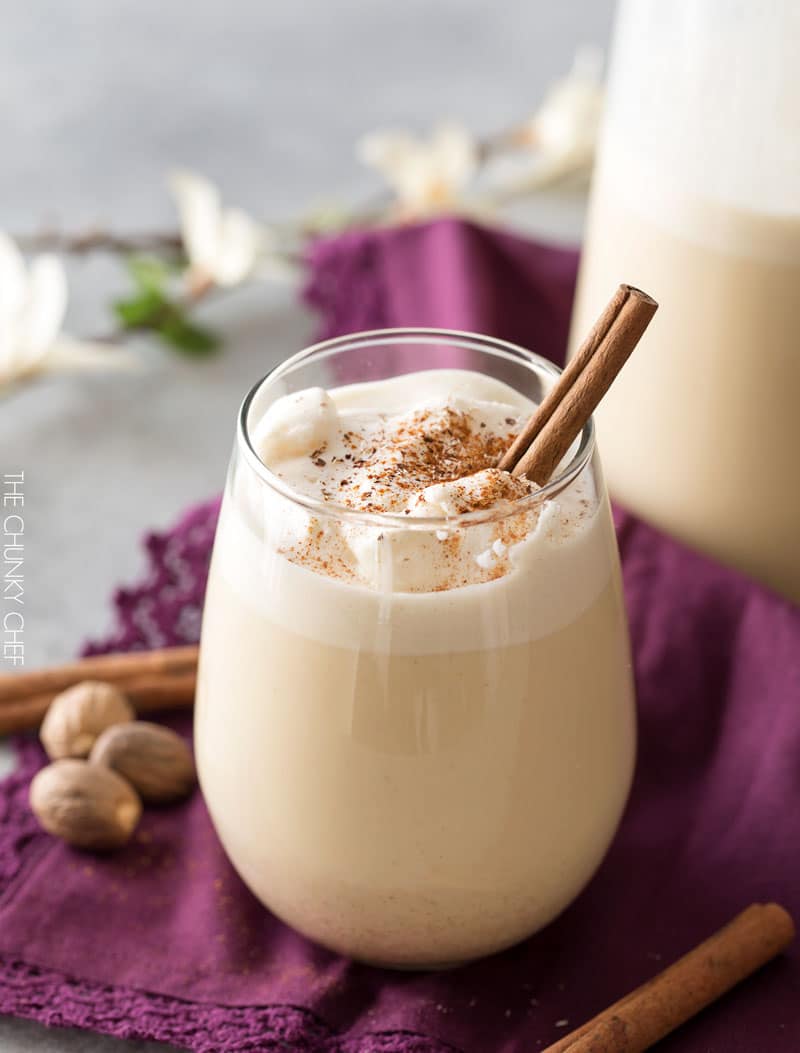 It may be tempting to drink your eggnog right away, while it’s still all frothy and fresh… and you can… but it will taste best if you age it a little.  Traditionally eggnog was aged for weeks, even months!  Remember, the alcohol acts as a preservative, so it’s safe.  I like to age mine at least a day or two, and up to 2 weeks.  It could probably go longer, but I like to be a little cautious. 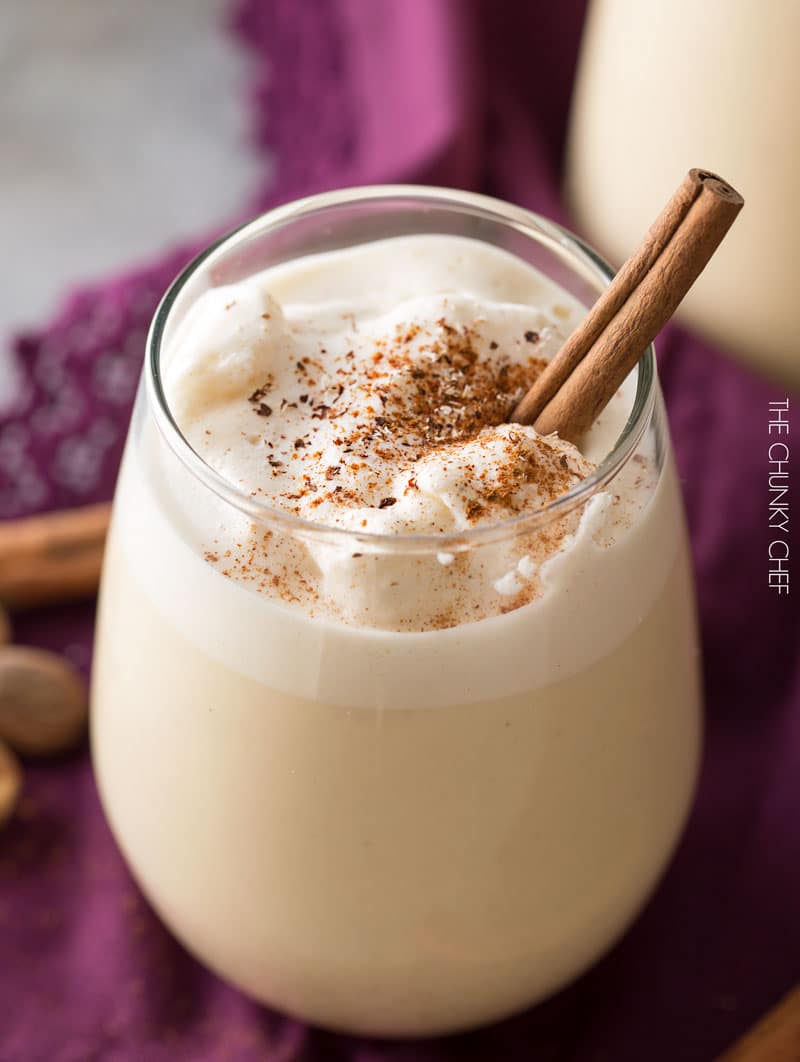 There are a few classic alcohols used in eggnog…. bourbon, brandy, rum, and cognac.  My personal favorite is bourbon and cognac… it lends to a really smooth, luxurious eggnog.  But as always, this is YOUR eggnog… so add whatever alcohols you prefer.  A general rule of thumb though, is that brown liquors are best.

I hope you all give this eggnog a try this holiday season (or any season really)… once you try homemade, you won’t want any store-bought eggnog again!

Helpful Tools For This Recipe:

WANT TO TRY THIS BLENDER EGGNOG?

PIN THEM TO YOUR DRINKS OR HOLIDAY BOARD TO SAVE FOR LATER!

This light and deliciously creamy homemade eggnog can be made in just 5 minutes in your blender! Nothing hits the holiday spot more than a cup of eggnog!
5 from 28 votes
Print Recipe Pin Recipe
Prep Time 5 mins
Total Time 5 mins
Servings 5 servings
Calories 465

Feel free to taste test and adjust the amount of alcohol to your tastes! Recipe adapted from Jeffrey Morgenthaler

IF YOU PREFER A COOKED EGGNOG: 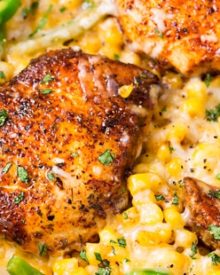 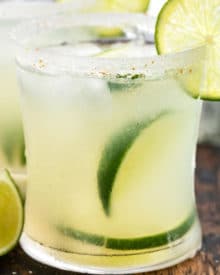