END_OF_DOCUMENT_TOKEN_TO_BE_REPLACED

This spinach quiche is made easy by using frozen pie crust, and is filled with mouthwatering flavors like gruyere, ham, bacon, and mushrooms!

Savory quiche, filled with spinach, Gruyere, caramelized onions, ham, bacon and mushrooms!  My version is made extra easy by using frozen pie crust, and most of the ingredients can be prepped ahead of time, making this a fabulous, easy meal!! 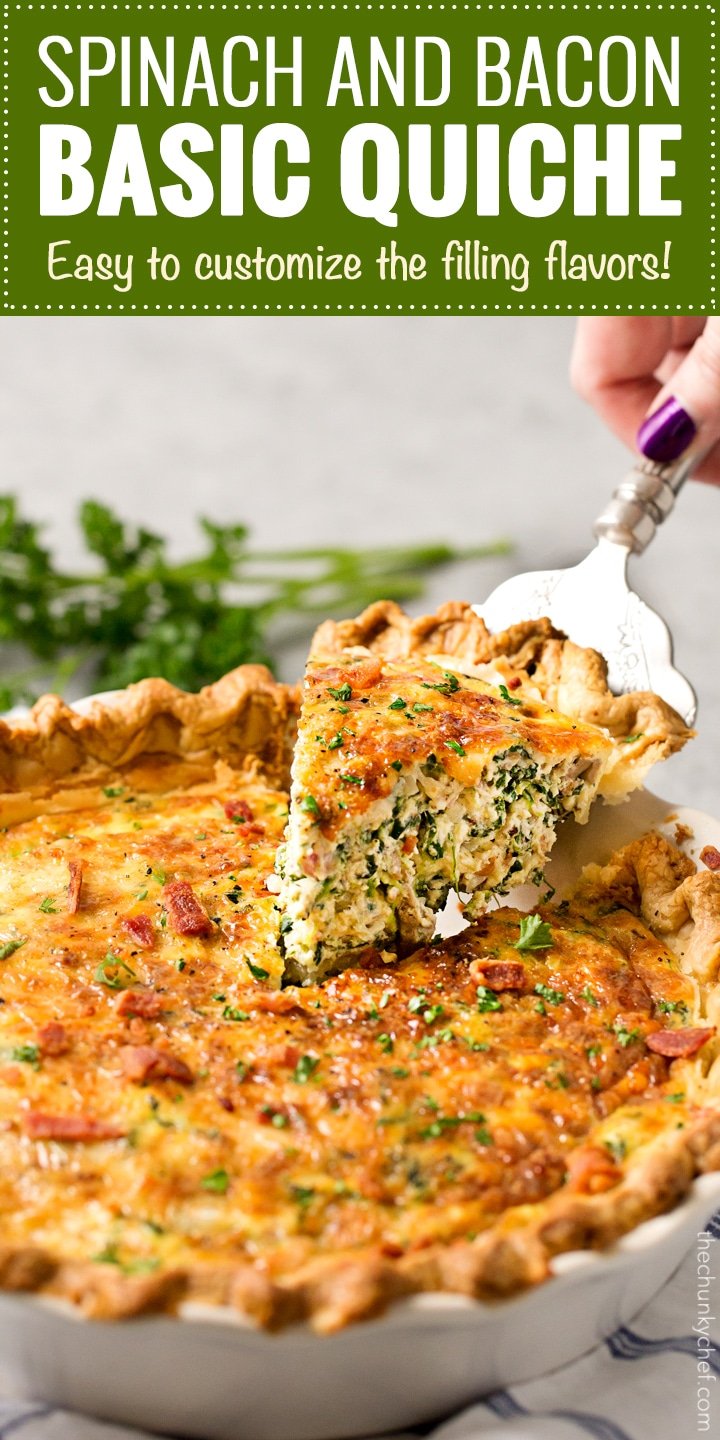 This is a recipe that I’ve been wanting to put on the blog for a while, but somehow never got around to it!  My daughter calls this “egg pie”, and honestly, it cracks me UP, but she’s pretty much right.  I mean a quiche is basically a savory pie, filled with an egg custard, right?  Back when she was in preschool, they were learning about food and cooking, and when the teacher asked her what her favorite meal was… you guessed it, she said “egg pie”.  And of course, no one knew what she was talking about lol. 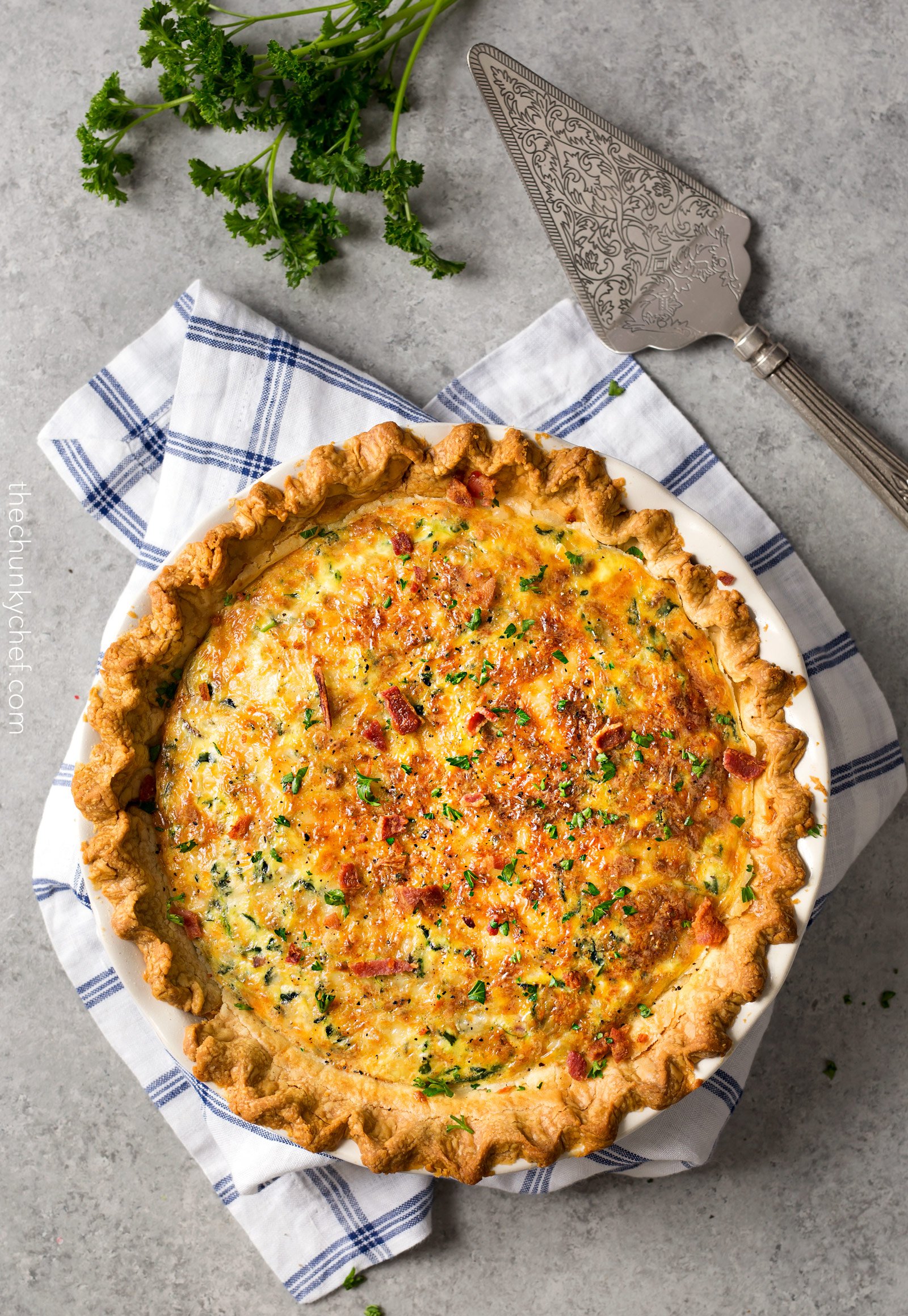 I never thought of quiche, especially spinach quiche, as being a kid-friendly recipe… but oh man, both my kids go to town on this quiche when I make it!  In fact, one pie is almost not enough!  Lord help me when the kids are older and eating more lol.

One thing I love about this recipe, is that you can pretty much use it as a method for making quiche, then add whatever fillings you like!

If you do want to go for the mushrooms and spinach, make sure you press all the water out.  Wet ingredients make for a wet filling, which would make for a quiche that won’t fully set.  I’ve done it before, and it’s no fun!

You could also use a homemade pie crust if you’d like… I just seem to have an inability to make a pretty crust.  I have my great grandma’s recipe, and it’s amazing, but I don’t have the knack for it I guess lol. 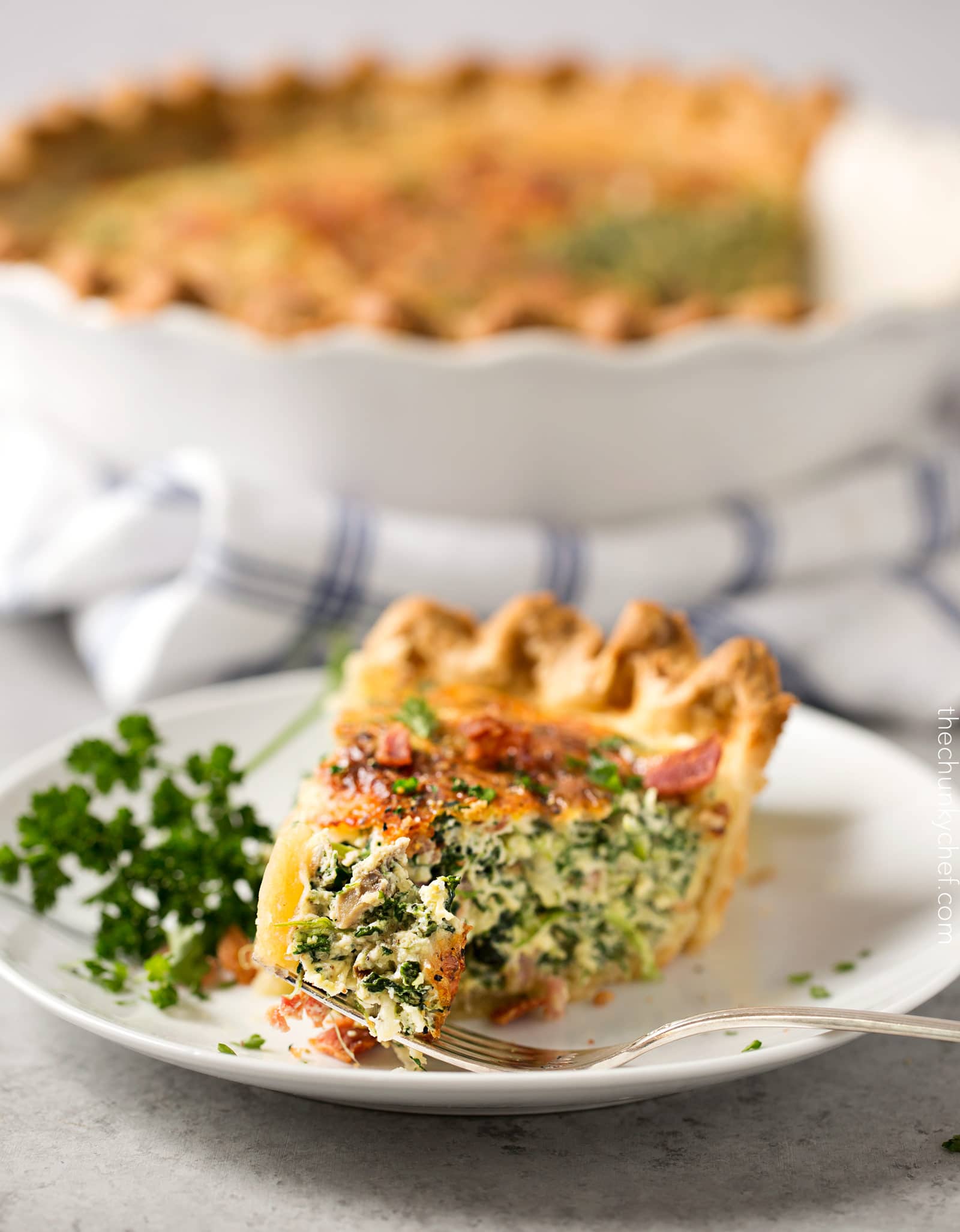 For me, deciding what to serve with this spinach quiche has always been difficult.  But lately I’ve been serving a quick side salad and some slow cooker ranch mushrooms, and it’s been a hit!

If you make this spinach quiche from start to finish, it can be a little time consuming, so here are my prep-ahead tips: 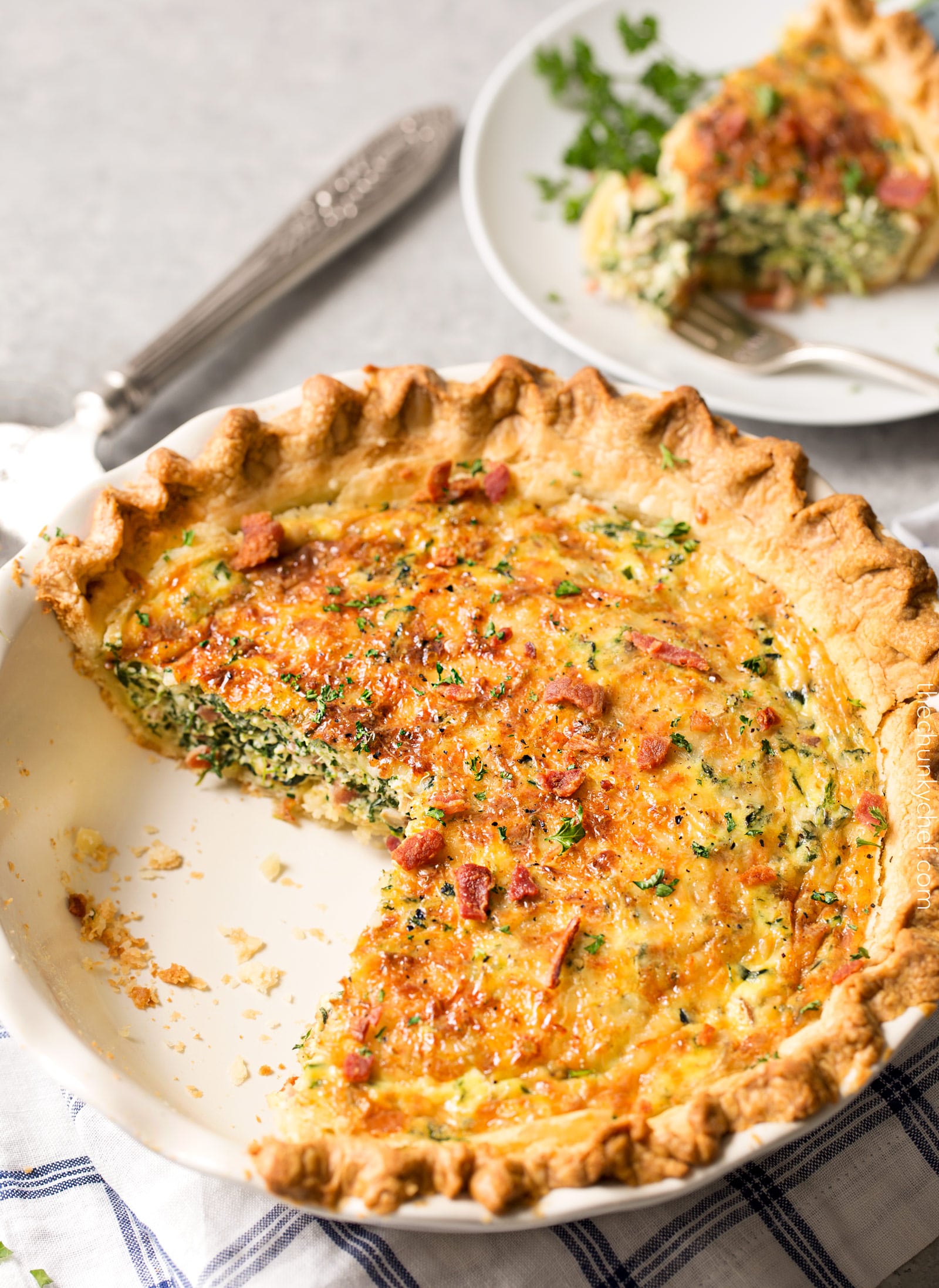 Once you have the ingredient prepped, you can get this together in about 5-10 minutes.  Basically, while the spinach is defrosting, you can beat your eggs, half and half, seasonings, add in ham, onions, bacon, cheese, and chopped mushrooms.  Then just squeeze the excess water from the spinach and stir it into the egg mixture.  Pour it into the frozen crust and bake. 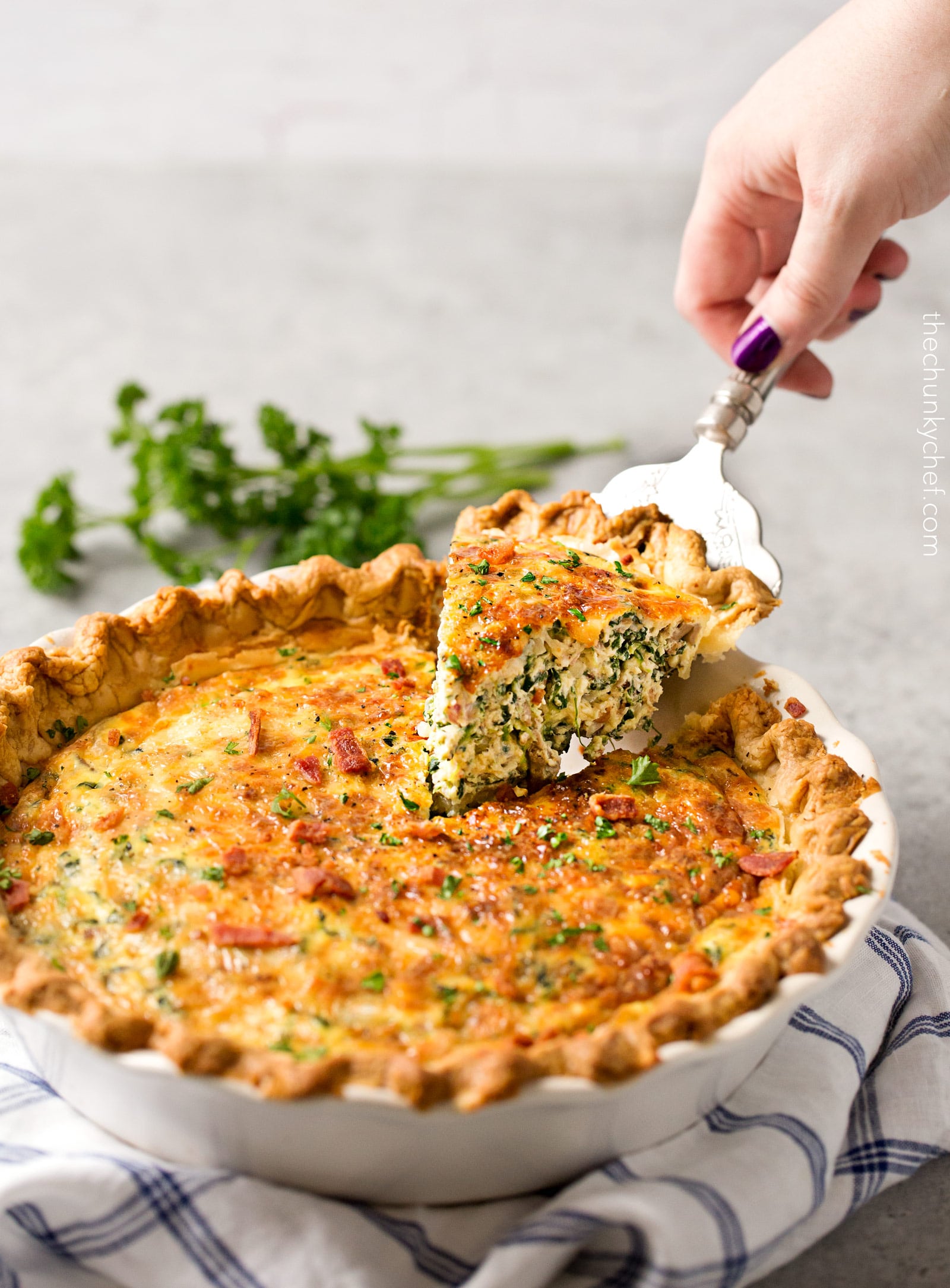 Some people like to blind bake their pie crusts, and feel free to do that if you prefer… I’ve never needed to, and it’s a great texture.  But this is your quiche 🙂

I hope you guys make this Basic Cheesy Spinach Quiche with Bacon soon! 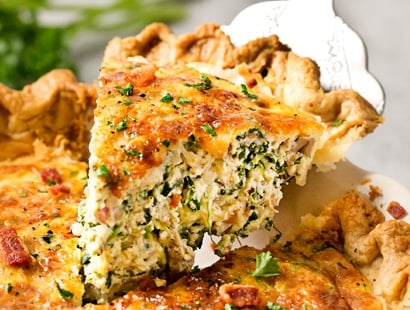 END_OF_DOCUMENT_TOKEN_TO_BE_REPLACED

8 hours 5 minutes
END_OF_DOCUMENT_TOKEN_TO_BE_REPLACED
Send this to a friend