This classic baked spinach artichoke dip gets an upgrade with the addition of buttery asiago cheese! Make it for a party and watch everyone grab seconds!

It’s hard to beat a classic dip like spinach artichoke dip.  I mean, it’s on the appetizer menu of nearly every major restaurant!  I took that dip and added a few things, like roasted red peppers, smoky bacon… and my personal favorite, tangy and buttery asiago cheese! 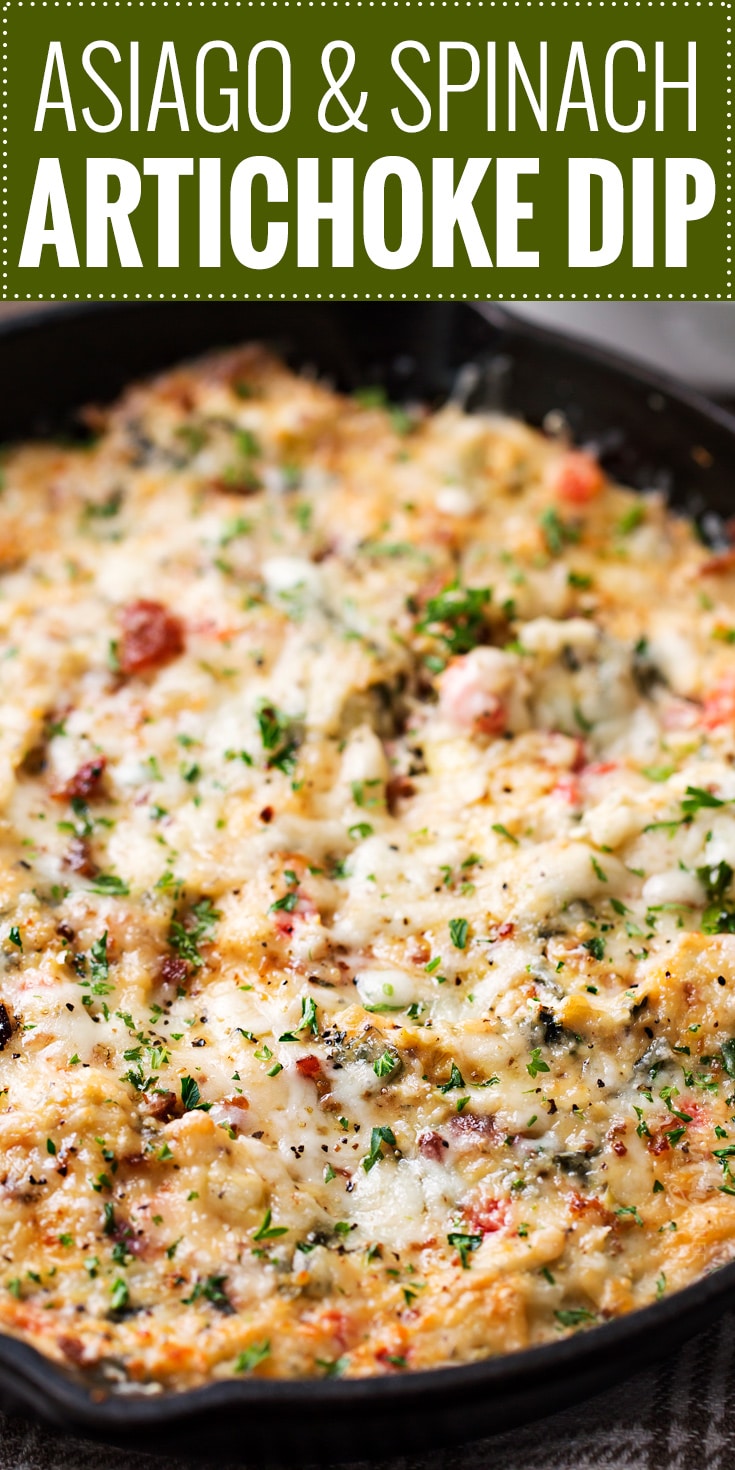 There are so many great opportunities this time of year to enjoy game day foods!  College football, professional football, the World Series, etc.  While the games are fun to watch, the food is even better right?!  There’s just something about great appetizers… they’re so fun to eat, and always so full of amazing flavor!

When we go out to dinner, if we order an appetizer, we usually get a spinach artichoke dip.  I mean, c’mon, it’s a classic right?!  Generally at a restaurant, it’s served with some tortilla chips, which inevitably break while you’re trying to scoop up some delicious dip and you’re left frustrated. 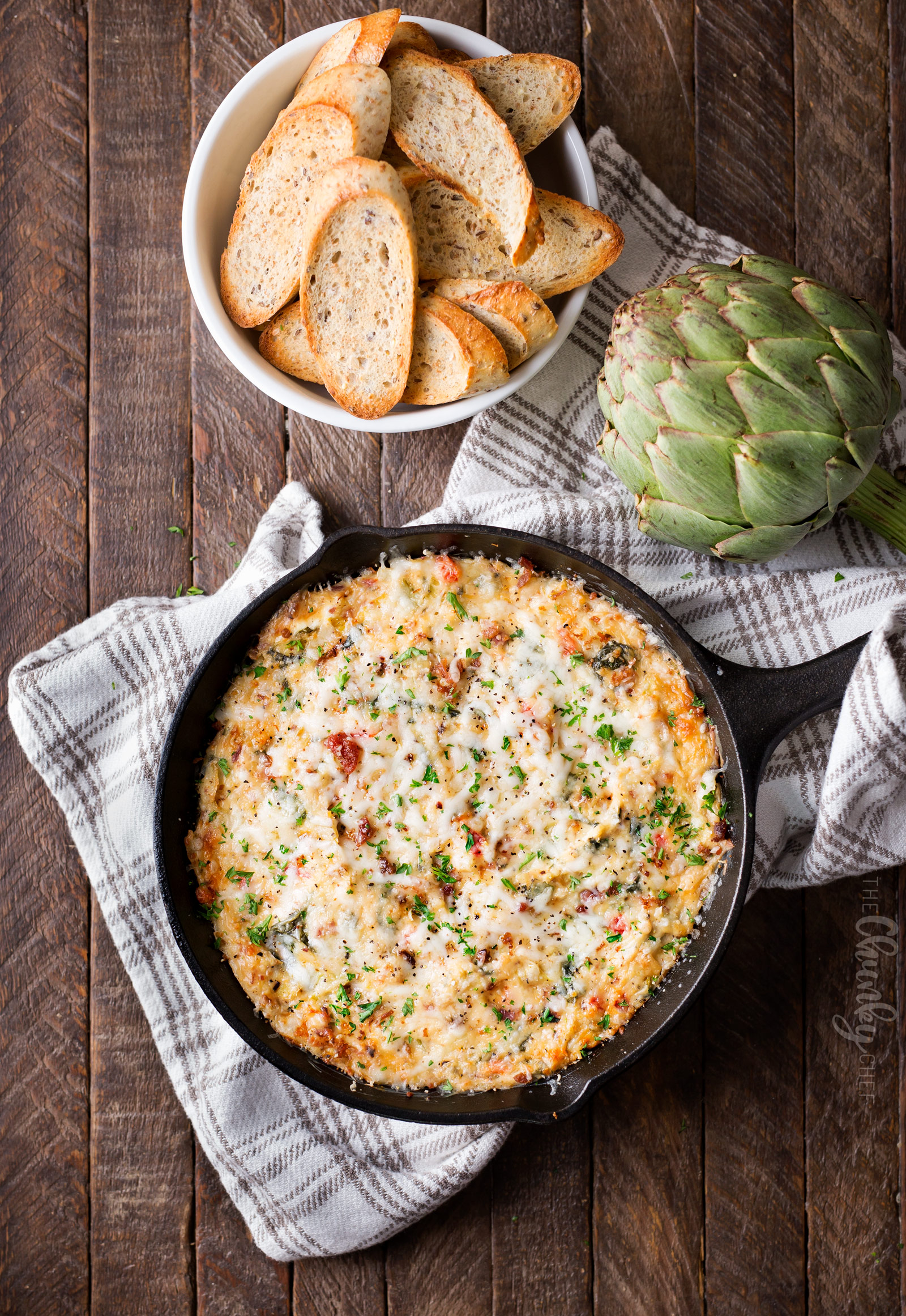 So for this recipe, I knew I wanted to serve it alongside some sturdy slices of toasted baguette!  No more breaking mid-dip. Plus I love the way the crunchy whole grain bread contrasts with the smooth, cheesy dip!

I’m sure by now, everyone has had a classic spinach and artichoke dip.  Not knocking it, it IS pretty amazing!  I always felt it could use some extra flavors though… so for my version I added sweet roasted red peppers, smoky bacon, and extra cheese!  Not just any cheese though, asiago cheese! 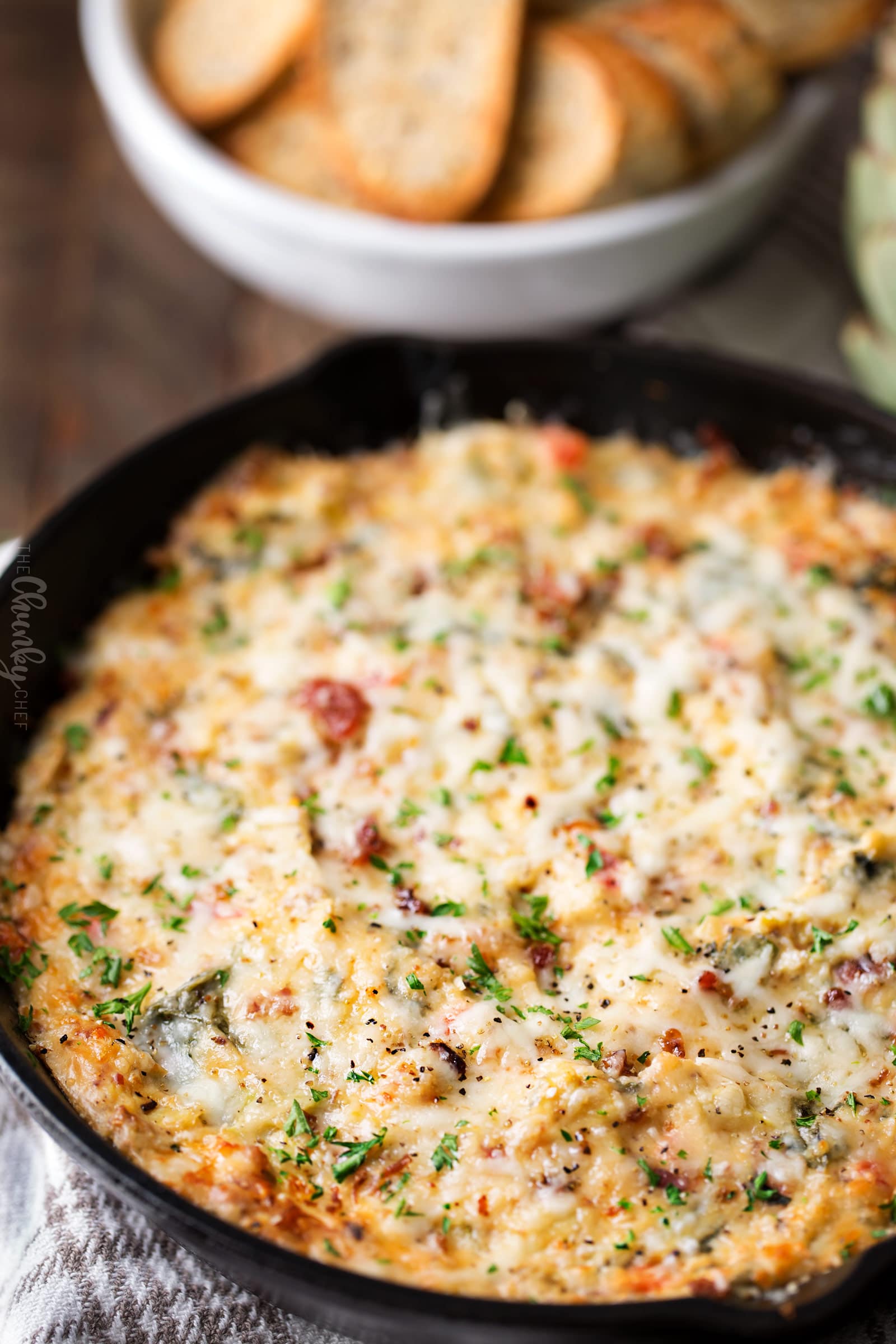 Asiago cheese is somewhat similar to Parmesan, except it isn’t quite as dry and crumbly, which means it melts BEAUTIFULLY!  I don’t have any problem finding asiago cheese in my regular grocery store (I buy a wedge of it, and grate it myself), but if you can’t find it at all, Parmesan will work as well.

My favorite vessel for baking this spinach artichoke dip is my trusty 9″ cast iron skillet (8″ works too, it will just be a little thicker), but if you don’t have one, a regular pie pan will do! 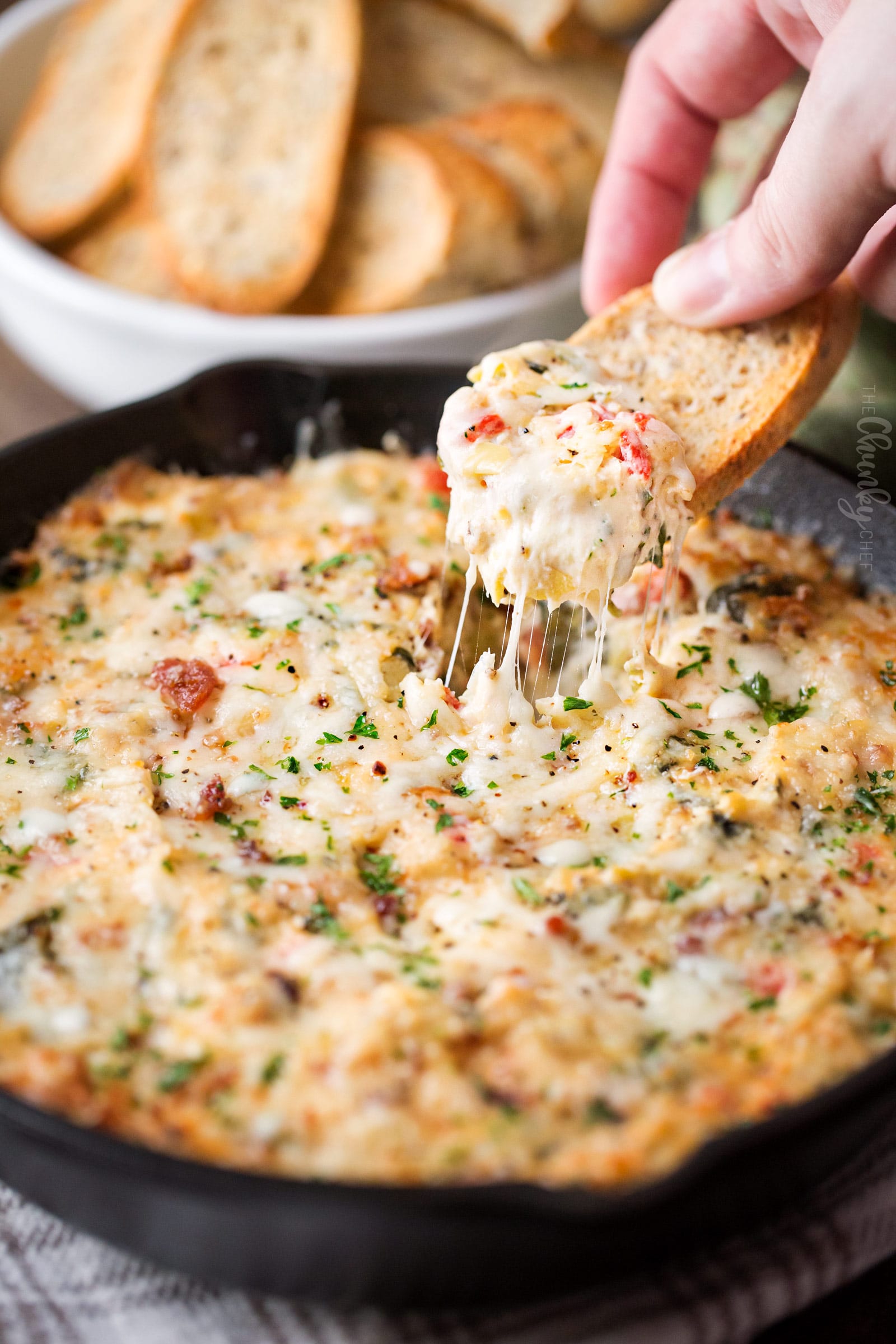 PREFER TO MAKE THIS A CHILLED DIP? 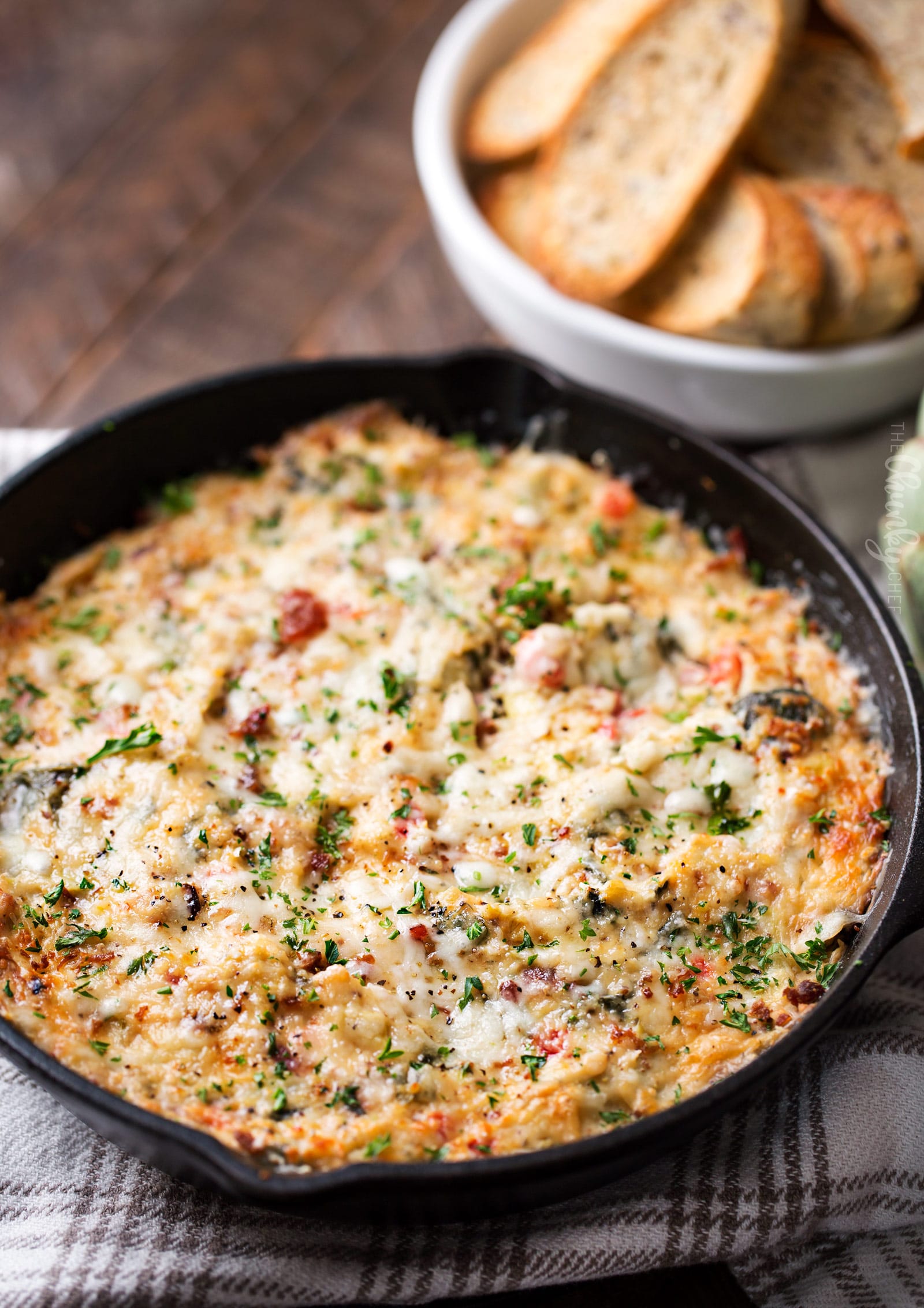 I hope you all try my version of this classic party dip… it really will knock your socks off!

PIN THEM TO YOUR APPETIZERS OR PARTY BOARD TO SAVE FOR LATER! 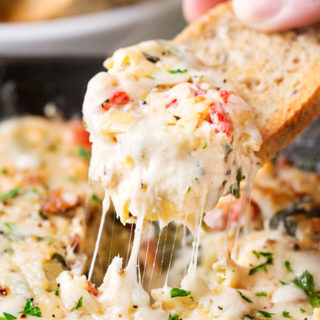 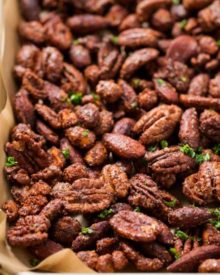