END_OF_DOCUMENT_TOKEN_TO_BE_REPLACED

This lemon pie is almost no bake, and the homemade lemon custard is folded with sour cream for an ultra creamy tang that is perfect for summer!

This rich and velvety smooth sour cream lemon pie is a classic at diners across the country, yet it’s easy to make right at home!  After pre-baking the pie crust, the filling is no bake, which makes for an ultra easy dessert that’s perfect for warmer weather! 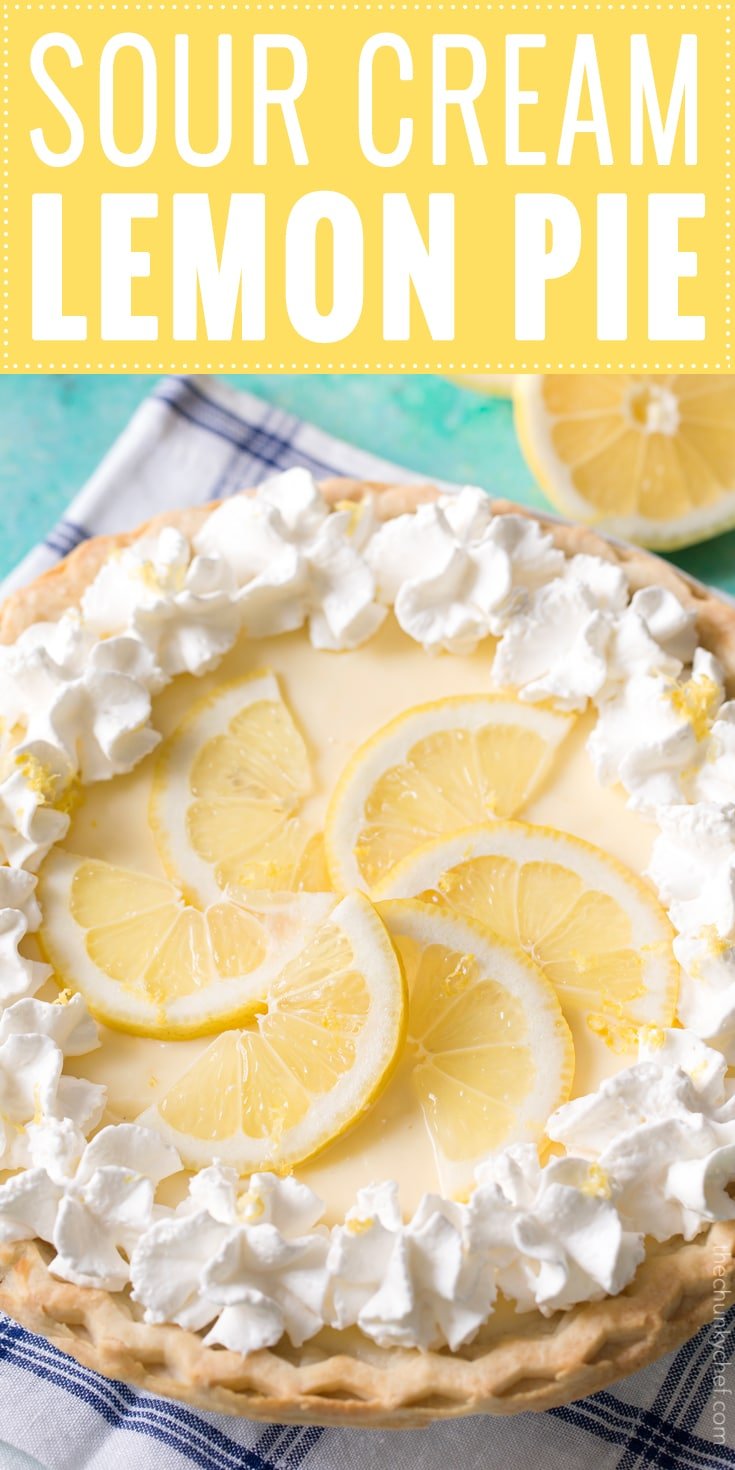 To me, there’s no more iconic dessert than pie.  So many varieties… from cherry to chocolate, no bake to frozen… you really can’t go wrong!  I don’t know about you guys, but I think summer just screams LEMON, so you know I had to bring a lemon pie to the table!

I’ve never been a meringue fan, so when I was flipping through an old Taste of Home magazine and saw this recipe for a sour cream lemon pie, it was like a total lightbulb moment… this was THE pie. 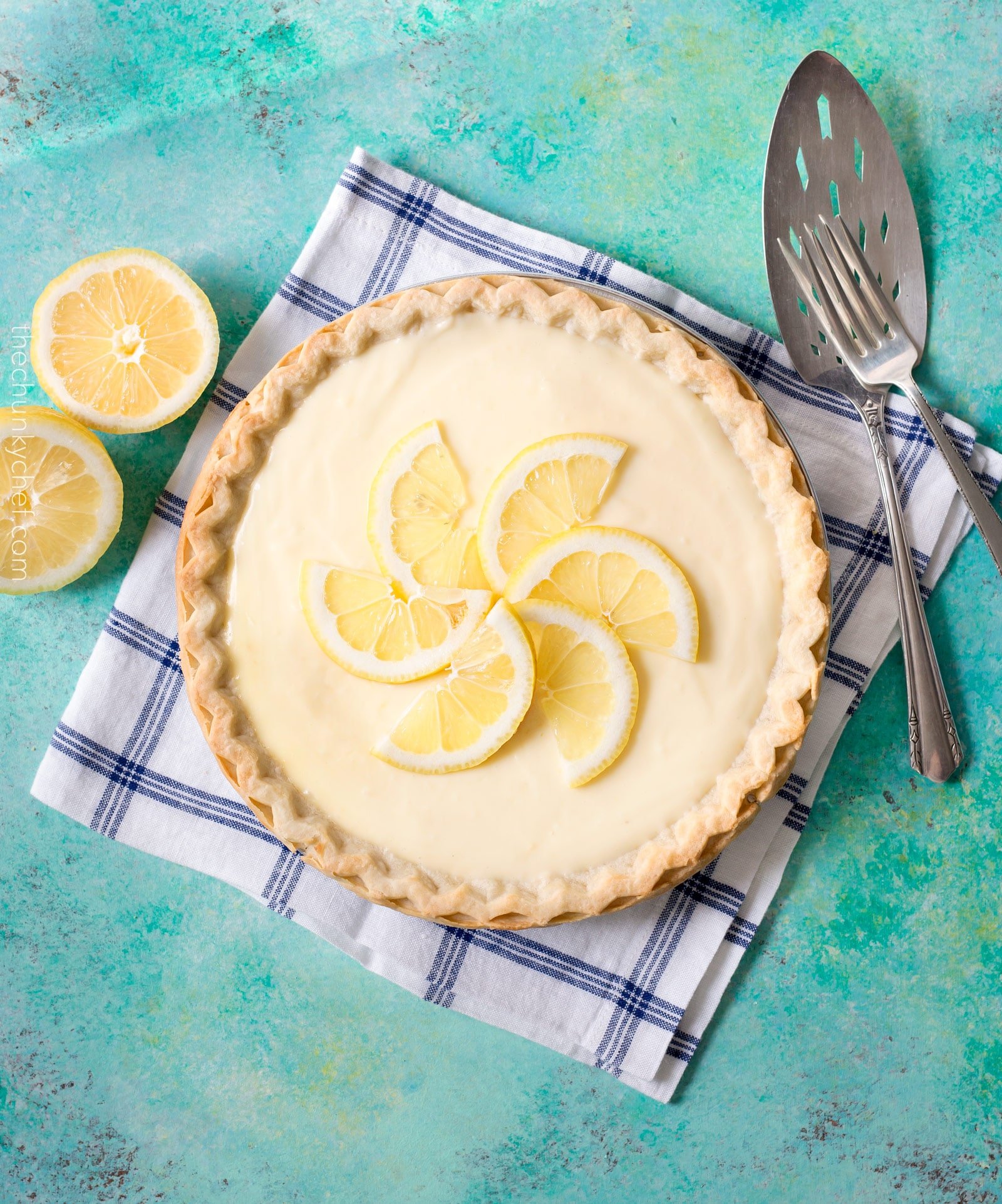 I love these kind of pies, where there isn’t a whole lot of actual pie baking going on.  I consider myself a reasonably good baker, but pies always seem to fail me.  I have a fantastic crust recipe, that I know works (it’s my great Grandmother’s), yet I always seem to mess it up, and I can NEVER get the beautiful crimps on the edges.  So usually I stick to cookies, skillet brownies and various no-bake desserts.  It’s easier than feeling like the only dolt around that can’t bake a decent pie lol.

Speaking of pies, did I ever tell you guys about the time I made pecan pie “soup”?  OMG, I have to tell you… even though it’s embarrassing lol.  About 8 or 9 years ago, I decided I wanted to bring the pecan pie to our family Thanksgiving.  Now bear in mind that my Mom makes an AMAZING pecan pie, so I already had some big shoes to fill, and I had never even attempted pie before.  Go big or go home right?  Instead of trying to make a crust from scratch, I figured I would buy a frozen one and no one would even know.  Except I didn’t know that I’d have to thaw it before baking…. 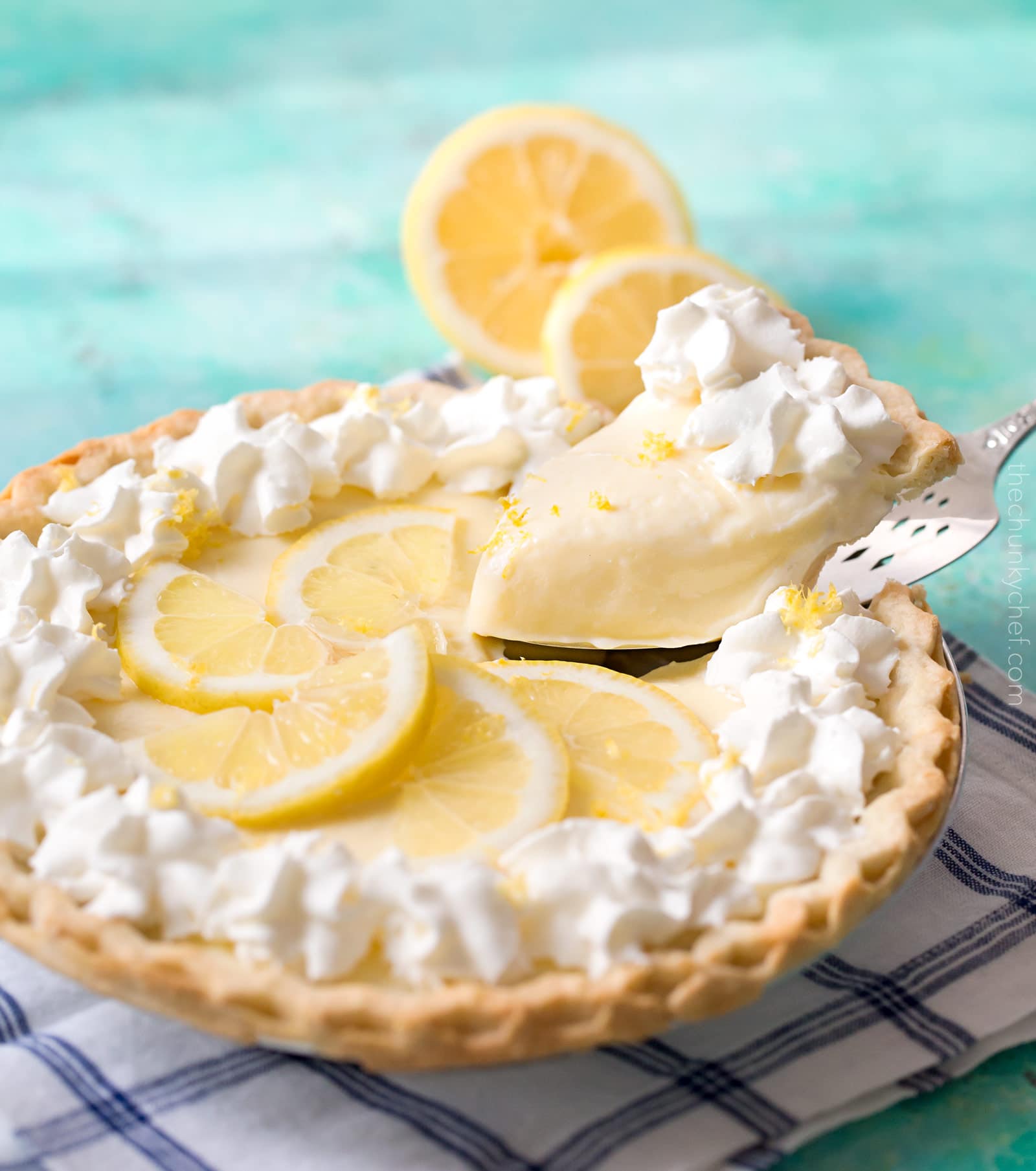 I prepared the filling according to my Mom’s recipe and was so excited as I slid it carefully into the oven.  As the baking time was up, I gleefully opened the oven to see if it was finished.  It. Was. Liquid.  No part of it was cooked.  Frantically, I called my Mom and she assured me the baking time was right, and to try 10 more minutes.  No go… still soup.  When I confessed to her that I’d used a frozen pie crust (unthawed), we figured out that was the culprit.  I baked and baked and baked it, and eventually got the edges to resemble a baked pecan pie, but the center was still essentially… pecan pie soup.  I will NEVER live that Thanksgiving down, but I also won’t make that mistake again lol. 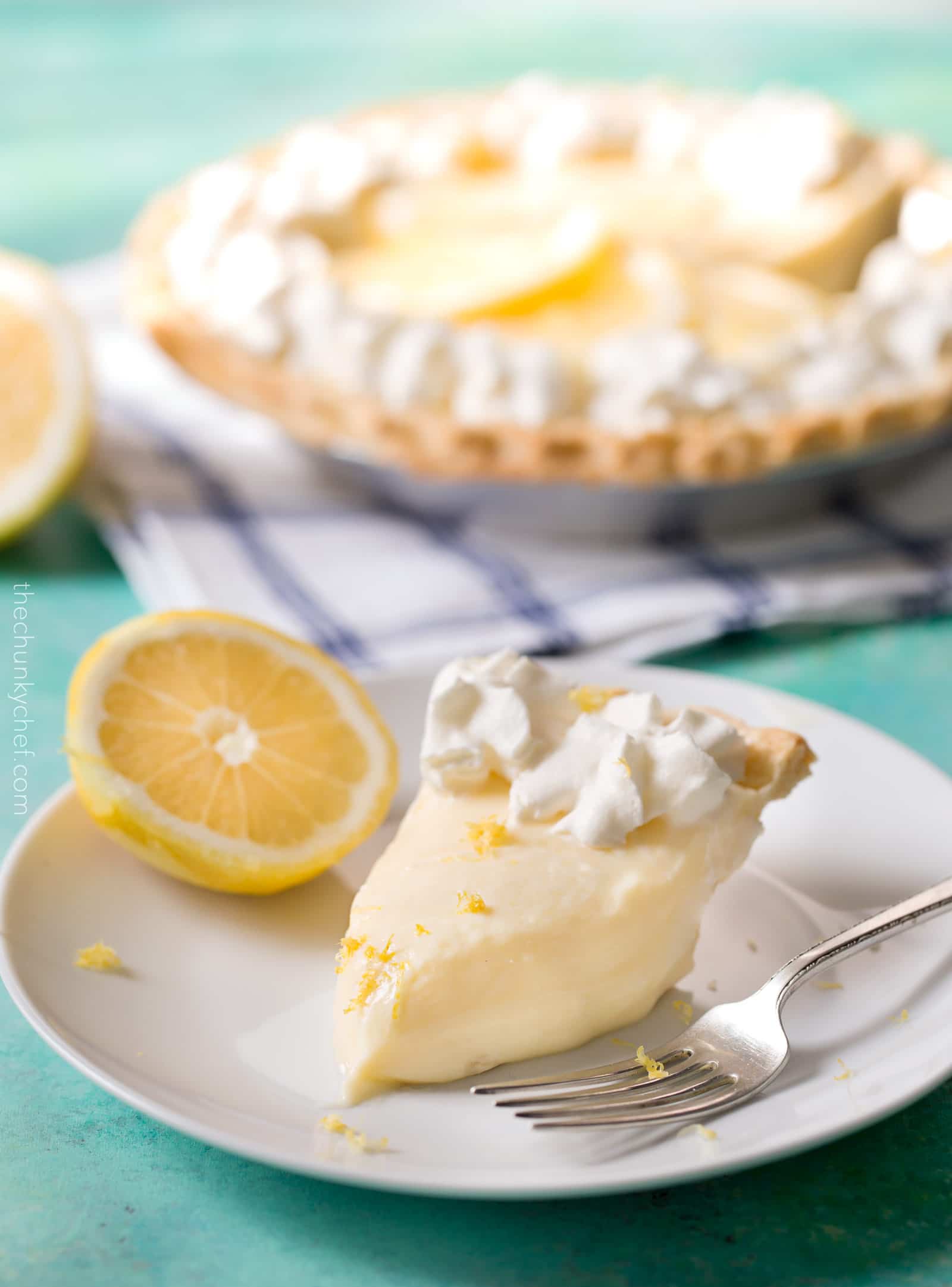 I’ve successfully baked a pecan pie since then, but I still get a little nervous before baking lol.

But this sour cream lemon pie is a cinch to make, all you have to do is make sure your custard is cooked enough so it thickens up.  The pie looks a bit droopy in these photos because it was HOT in the house when I was trying to take the photos.  You want the custard to look like a loose pudding, and make sure it’s chilled for at least several hours. 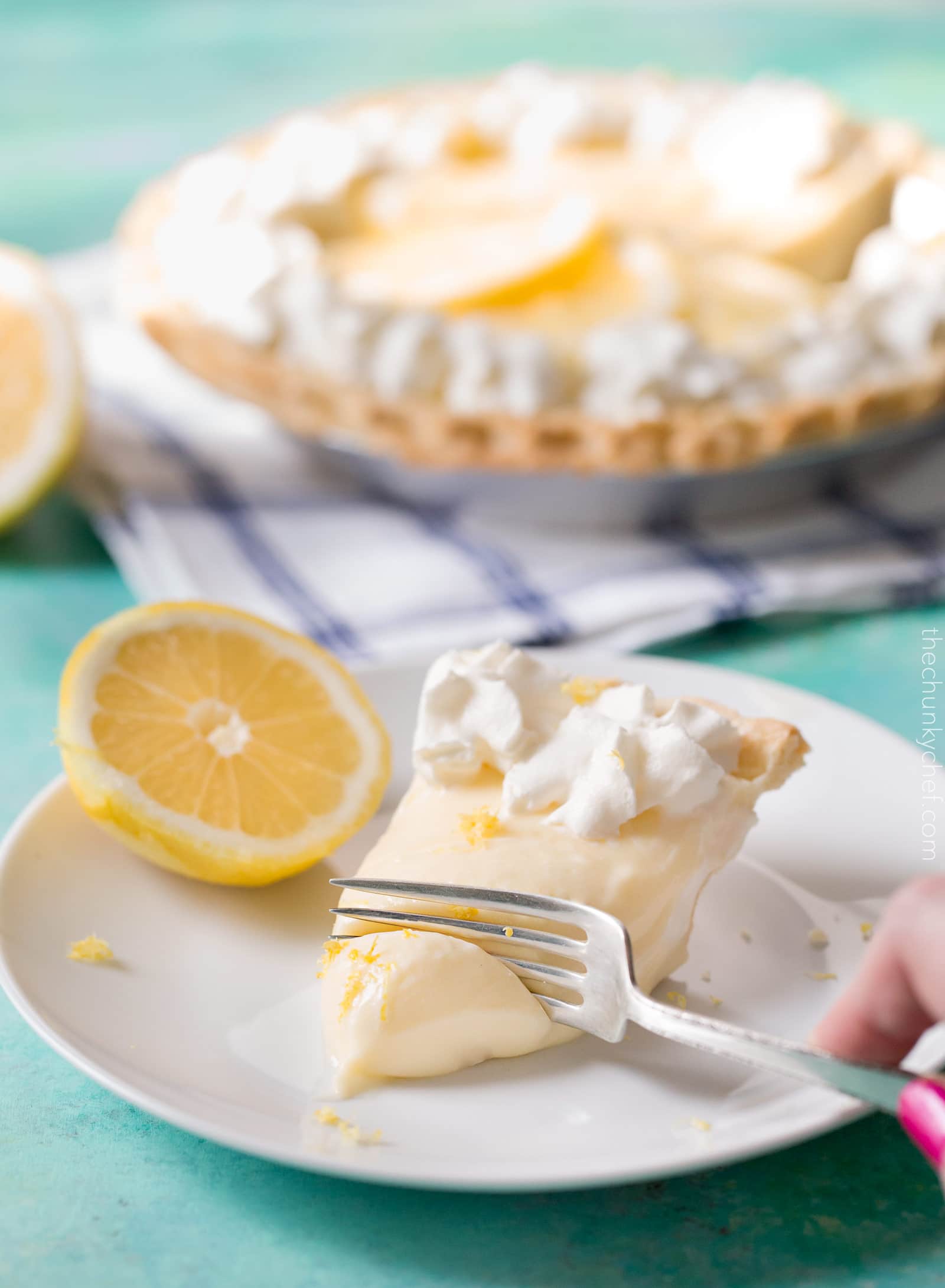 One bite of this sour cream lemon pie and you’ll be singing it’s praises!  It tastes like pure summer!

PIN IT TO YOUR DESSERTS OR SUMMER BOARD TO SAVE FOR LATER! 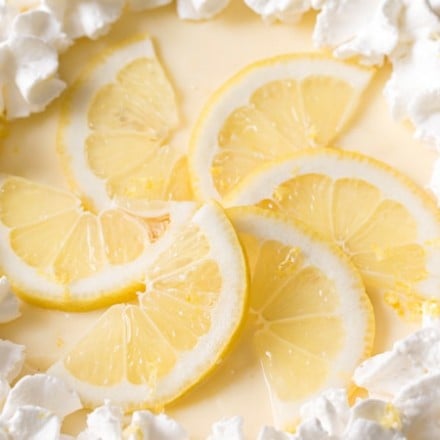 4.58 from 7 votes
Author: The Chunky Chef
Prep Time: 20 minutes
Cook Time: 13 minutes
Total Time: 33 minutes
Calories: 1407
Servings: 8 servings
(hover over # to adjust)
Print Rate Pin
This lemon pie is almost no bake, and the homemade lemon custard is folded with sour cream for an ultra creamy tang that is perfect for summer!