END_OF_DOCUMENT_TOKEN_TO_BE_REPLACED

Make dinner with barely any effort with this easy crockpot spaghetti casserole. With plenty of bold Italian flavors, the pasta cooks in the slow cooker with the meat sauce, making it tender and incredibly tasty!

This Italian comfort food dinner comes together with minimal effort on your part, and is perfect for a hungry family!  Try this Crockpot spaghetti casserole tonight! 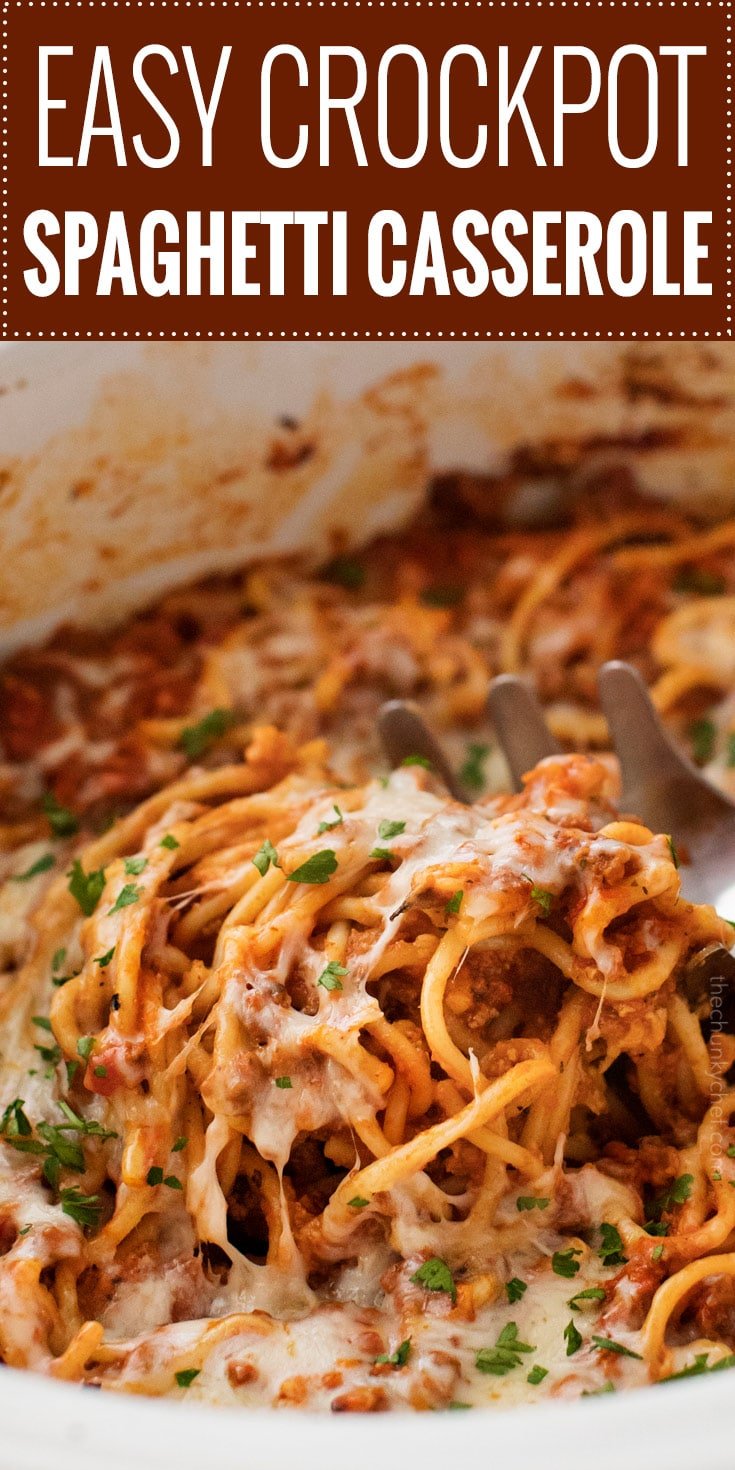 Ever since I shared my Slow Cooker Spaghetti Bolognese Sauce, you’ve been asking me for ways to cook spaghetti in the slow cooker.  And here it is!!  The only prep/pre-cooking you have to do here is brown the meat and stir together the sauce ingredients.  Easy peasy!

This recipe actually surprised me.  I saw it in an edition of Southern Living, and was intrigued by the fact that the pasta cooks with the sauce the whole time.  Other recipes usually call for the pasta to be added towards the end of the cooking time. 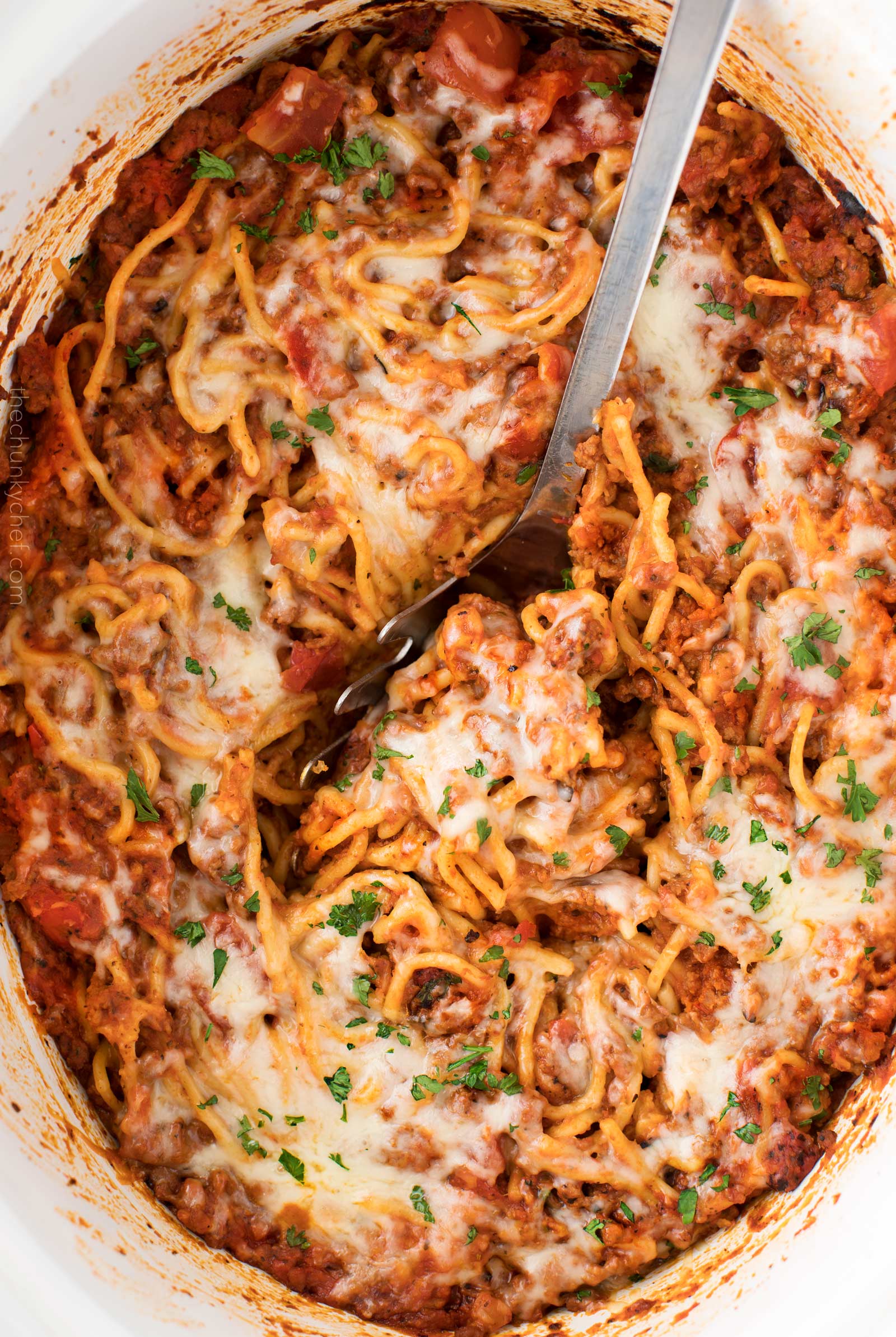 So I made the recipe exactly as they had written and it was good, but I felt it could use some tweaks here and there, plus some additional flavors (the original recipe had NO garlic in it… I can’t cook spaghetti without garlic!).  This is the result!  Pure comfort food, with a fraction of the work and hands on cooking time.

One thing to note is that the pasta in this spaghetti casserole is a little softer than a traditional boiled to al-dente pasta.  However, it’s not mushy and is incredibly flavorful from cooking in a meat sauce! 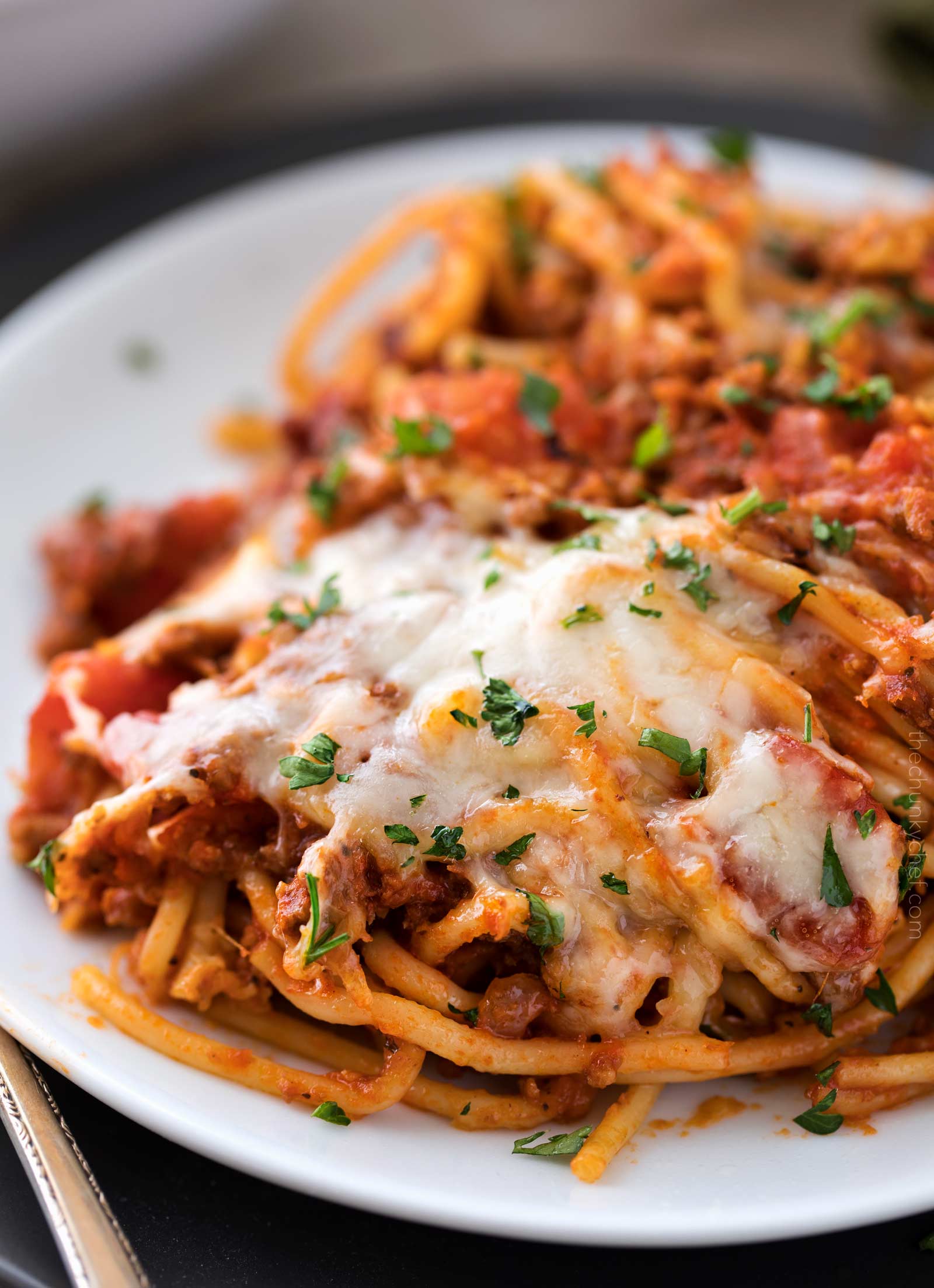 Not quite.  Million dollar spaghetti has a meat sauce, and spaghetti of course, but it also has a layer of ricotta/cream cheese that’s baked along with it.  In a way it’s sort of like spaghetti and lasagna had a baby 🙂

DOES THE PASTA GET MUSHY?

Not necessarily “mushy”, but is does have a softer texture, very similar to any baked casserole that has pasta in it.  The “bite” of freshly boiled pasta isn’t there. 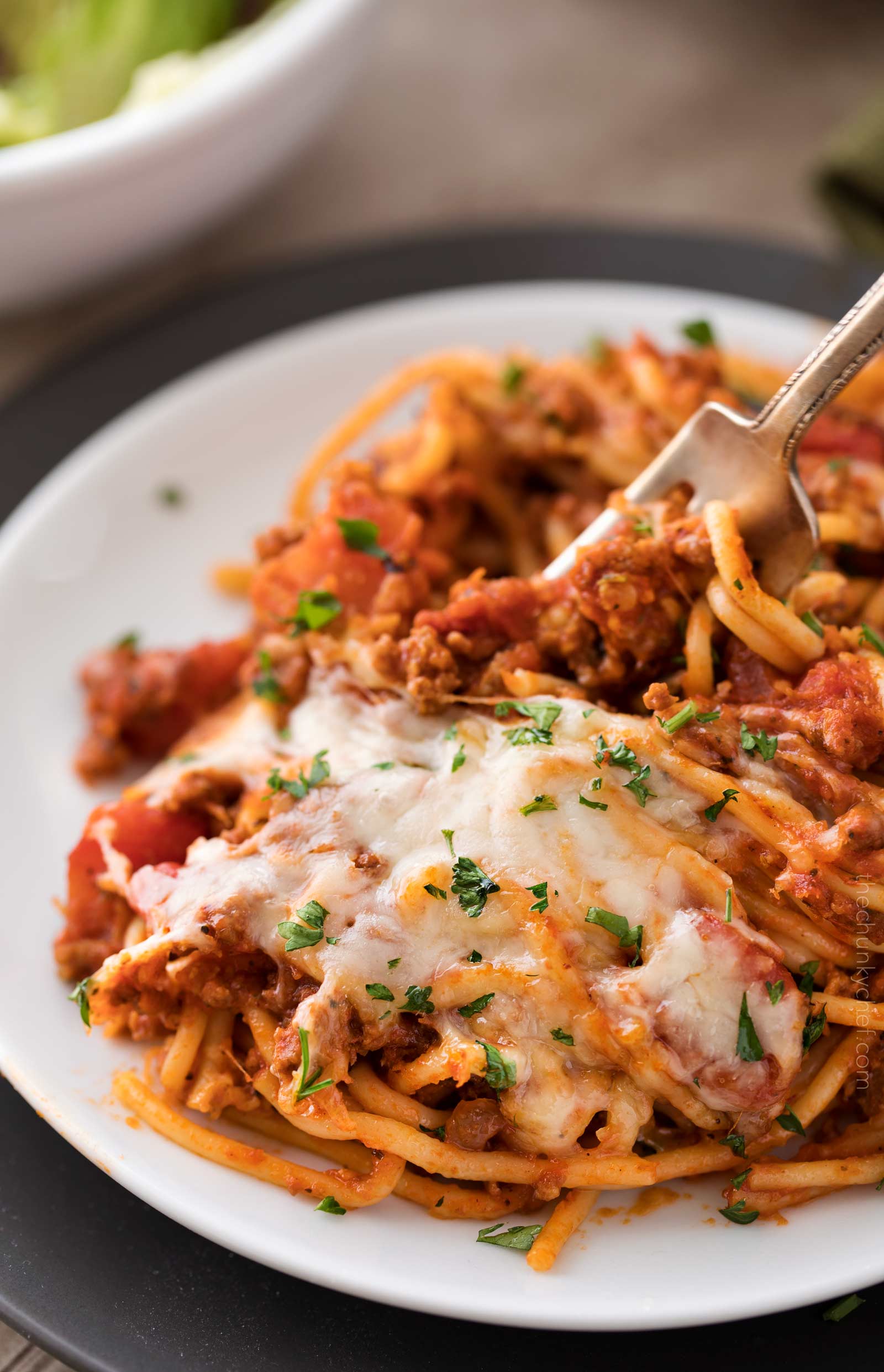 HOW TO MAKE CROCKPOT SPAGHETTI CASSEROLE: 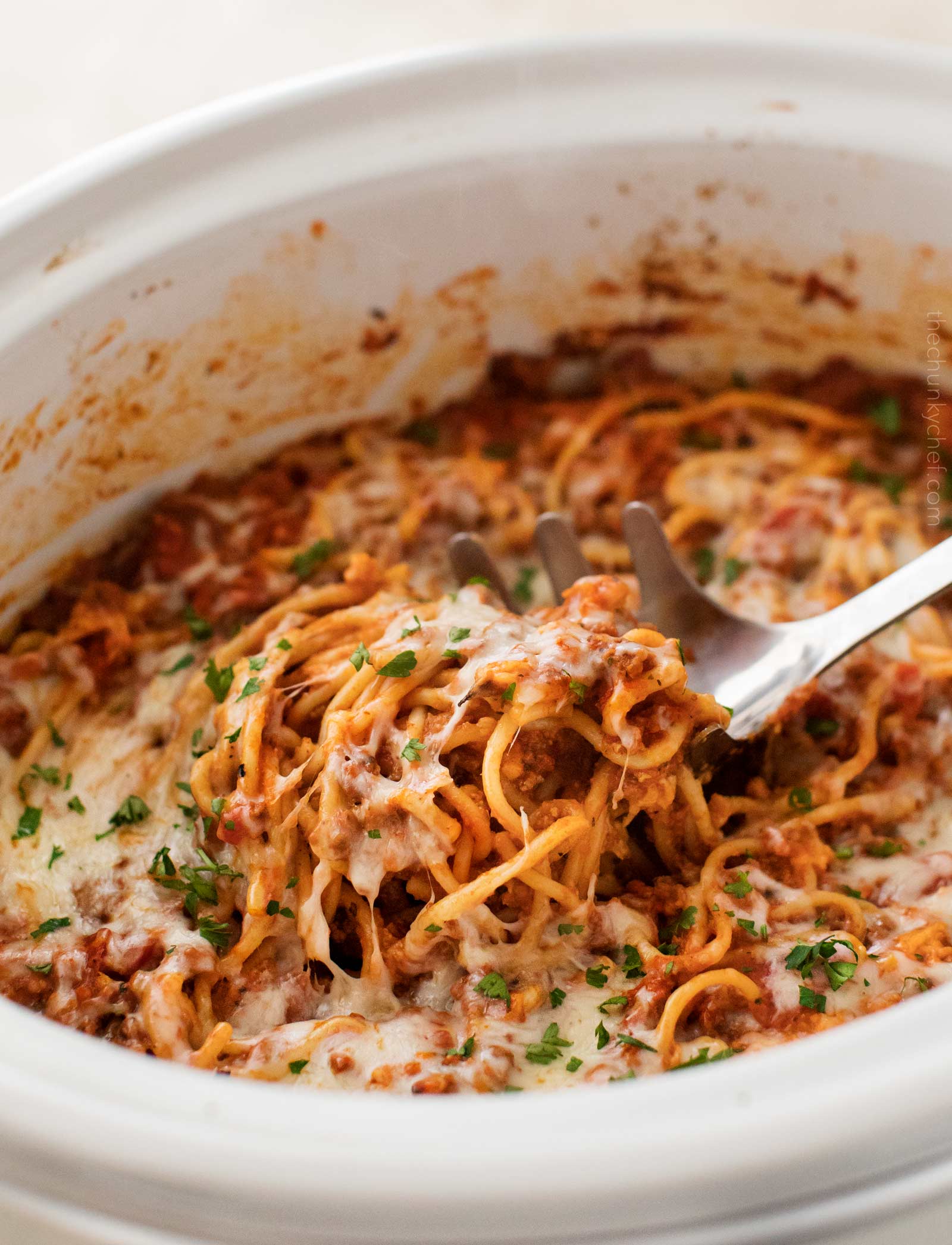 One thing to note about this recipe is that all slow cookers are different.  It’s inevitable, and frustrating!  That’s why the cooking time is a range for most slow cooker recipes.  My advice would be to check it at 3 hours in and see how the pasta is tasting.  If it’s soft and tender, then you’re good to go ahead and eat!

PIN IT TO YOUR DINNER OR SLOW COOKER BOARD TO SAVE FOR LATER! 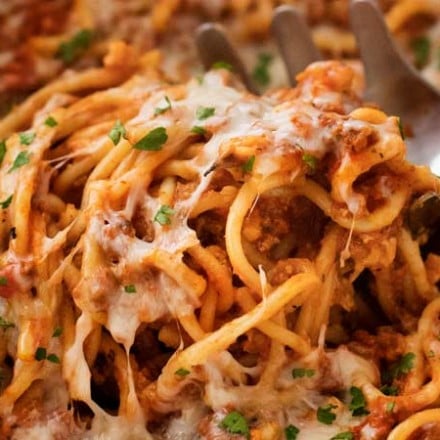 NEED TO COOK THIS CASSEROLE LONGER? I get it, some days you won't be home for a long time and a 3-4 hour cooking time just doesn't work for you right?  Try this variation: