END_OF_DOCUMENT_TOKEN_TO_BE_REPLACED

If you’re a chocolate lover, then I certainly have the dessert for you!  A decadent combination of a fudgy brownie and smooth French silk pie… this easy dessert is absolutely going to be your new favorite! 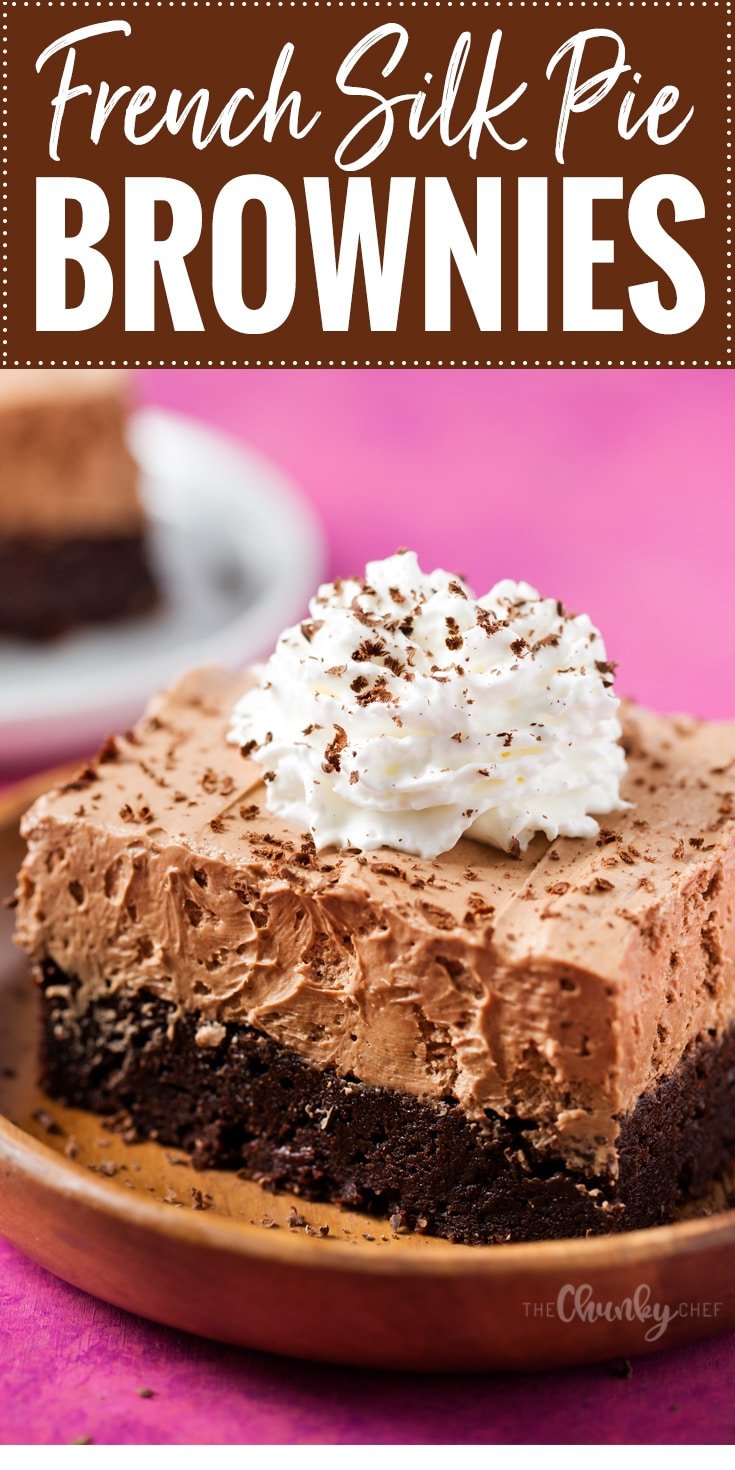 Okay, I have to know… are you a chocaholic?

I’ve actually been thinking about different chocolate desserts, planning ahead with blog posts for the rest of the summer and into fall, which got me thinking about these two chocolate recipes… the insanely popular brownie bottom cookie dough cheesecake, and my new personal favorite, the rolo-stuffed skillet brownie!

You all have pinned, left comments, and sent emails about how much you love those two recipes, so I know at least some of you are as in love with chocolate as I am 😉 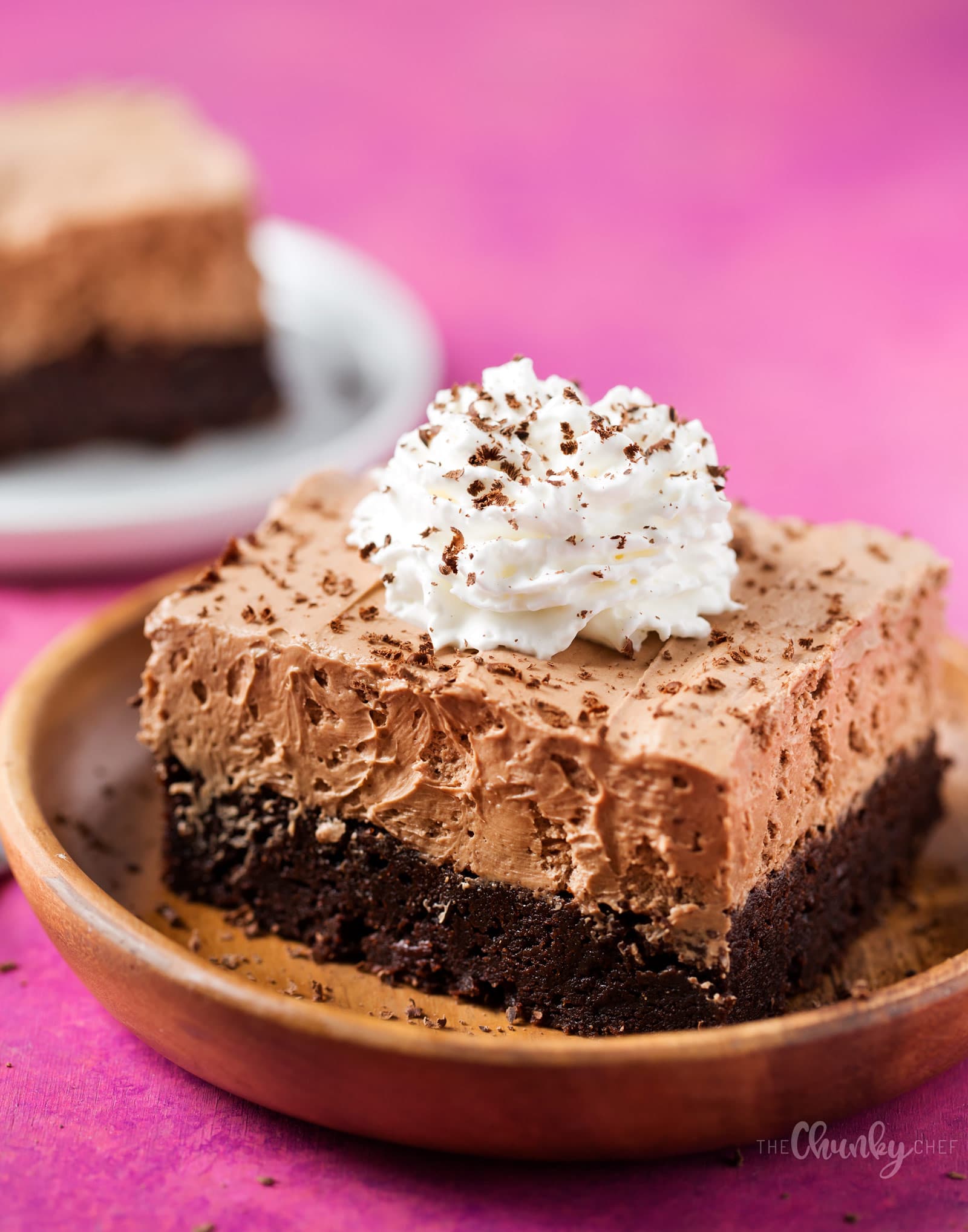 This recipe comes to you straight out of my fellow blogger Hayley’s new cookbook, Two in One Desserts!  Hayley blogs over at  The Domestic Rebel, and this is her second cookbook.  She ROCKS!!

The whole concept behind her book is sweet treats comprised of two (or more!) classic dessert recipes, combined in one mega-awesome dessert!  They’re all made semi-homemade, which is perfect for those of us with busy lives, and the recipes are so creative.  Obviously there’s these French Silk Pie Brownies, but there’s also Donut Bread Pudding, Whoopie Pie Cake, Chocolate Chip Cookie Cheesecake Bars, S’Mores Cookies, and MORE! 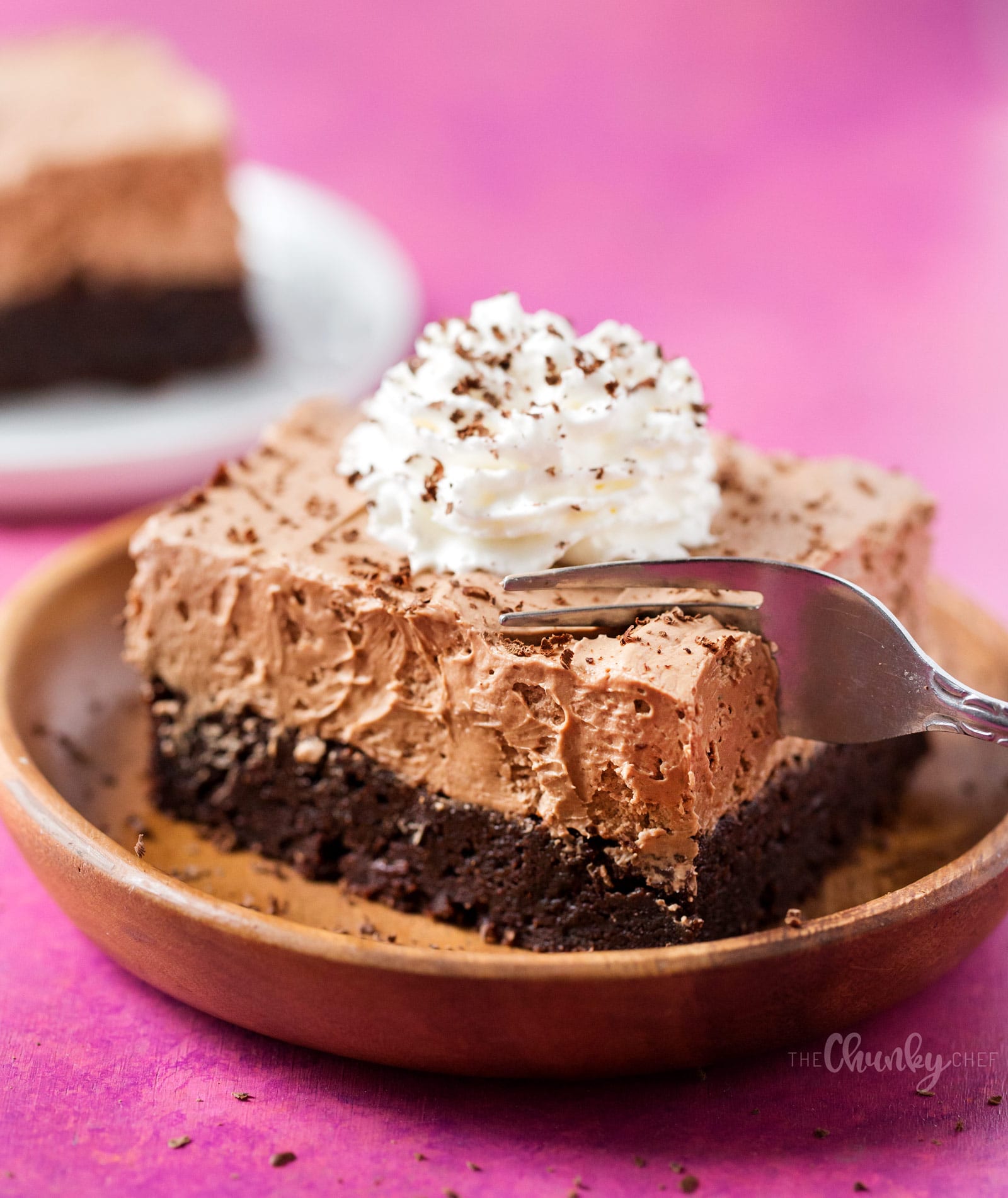 These French Silk Pie Brownies are just fantastic! So fudgy on the bottom, silky smooth on the top… they’re perfect for anyone who loves chocolate!

I’ve always been a fan of French silk pie, but traditionally, it’s made with raw eggs in the pie filling, which can weird some people out.  This amazing combination fixes both of those problems since the “crust” is brownies, and the filling is made egg-free! 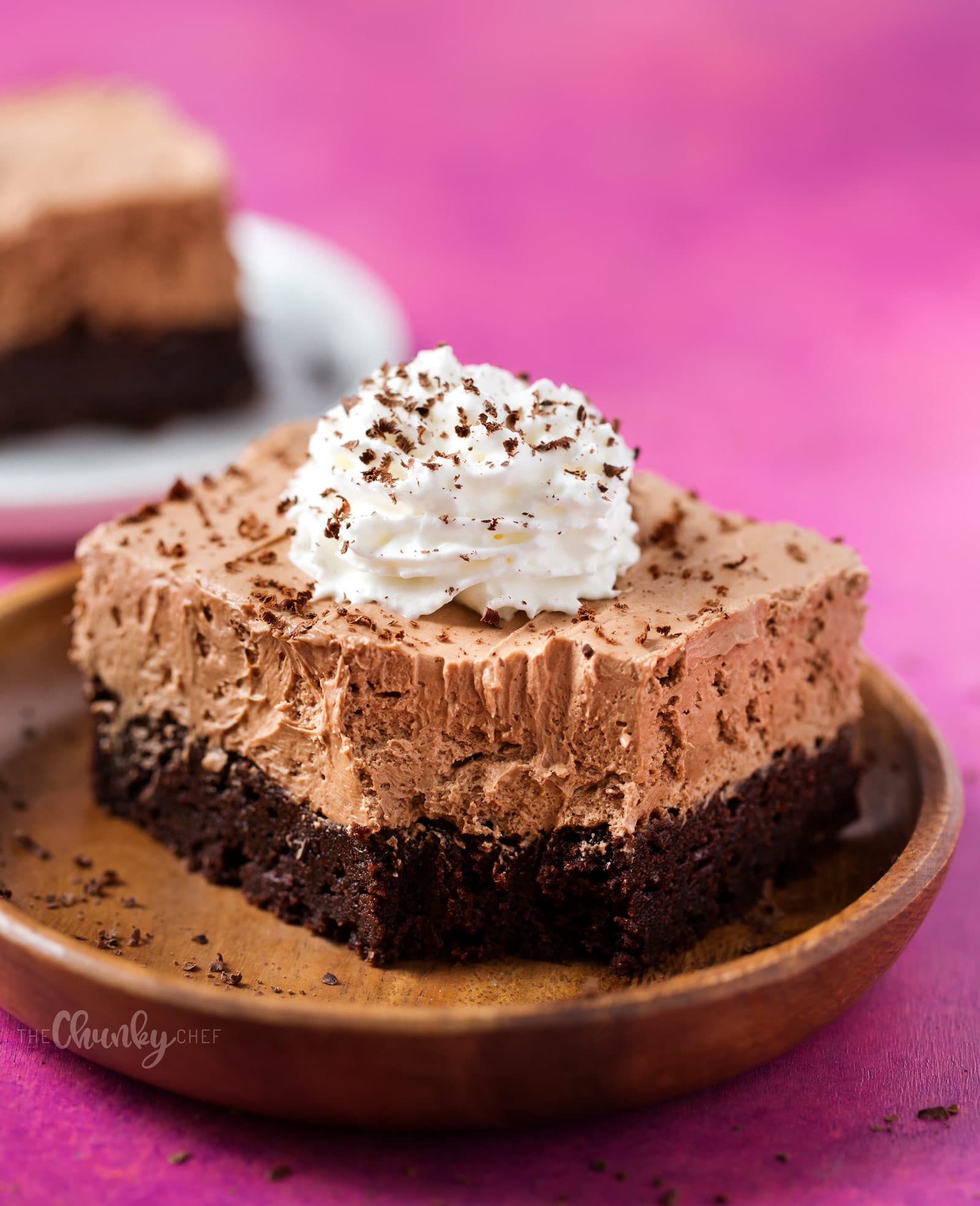 Hayley’s recipe is written for a 9×13 pan full of brownies, but it can be made in an 8×8 pan as well, you’ll just have more filling on top (like in my photos).  If you do want to make it in the 9×13 pan, make sure you buy a box mix that is large enough… most brands have a “family size” and some even mention the 9×13 pan size on the box.  Either way, you can’t go wrong!

I hope you all give these awesome French Silk Pie Brownies a try, and don’t forget to pick up the Two in One Desserts cookbook!! 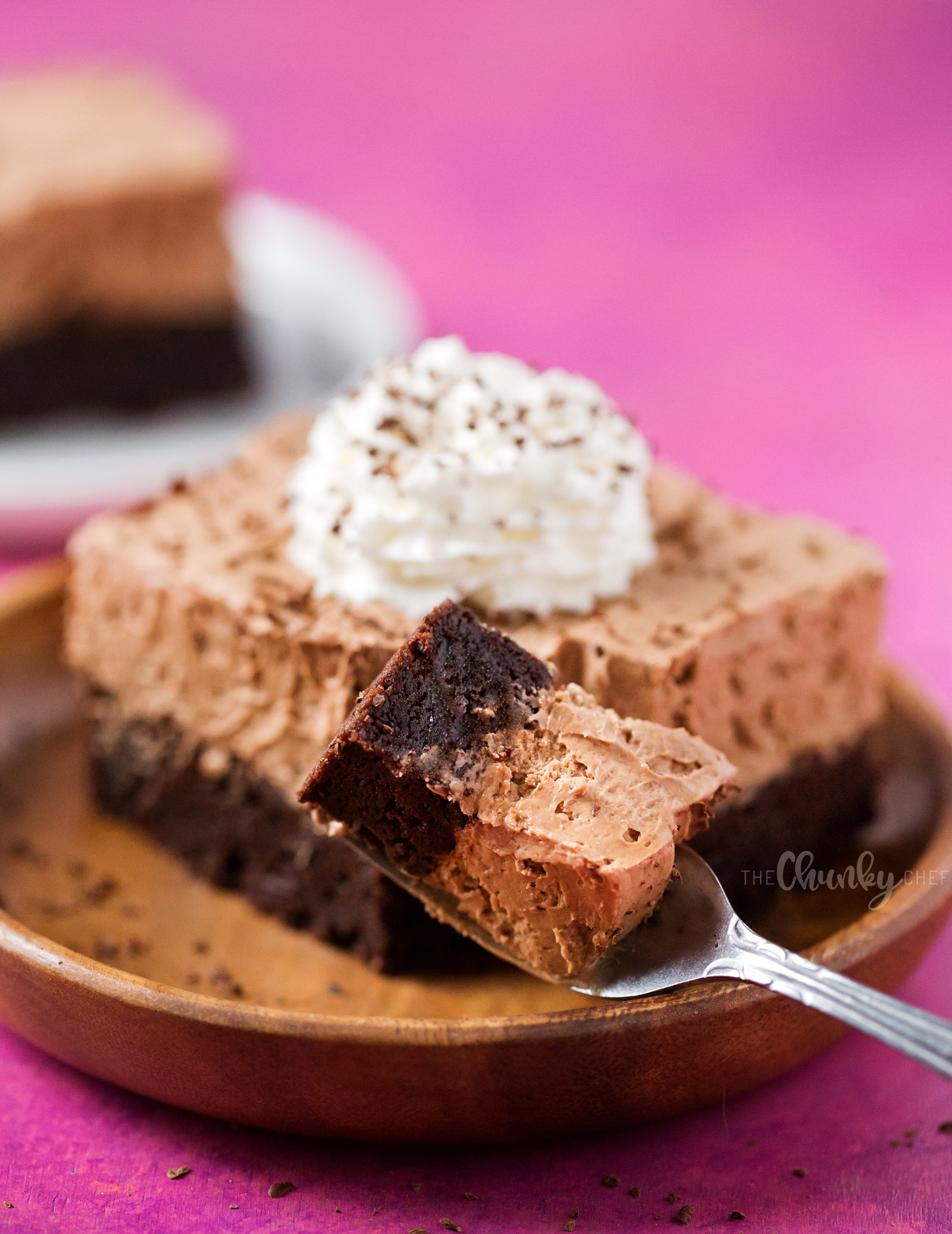 PIN THEM TO YOUR DESSERTS OR CHOCOLATE BOARD TO SAVE FOR LATER! 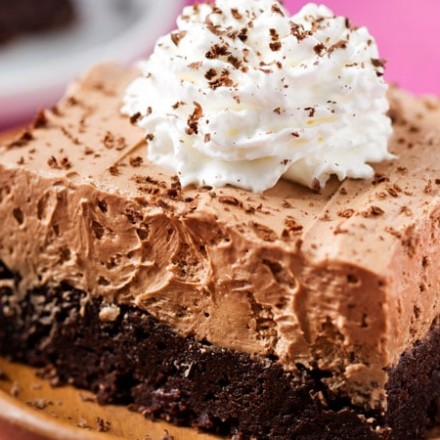 Recipe from Two in One Desserts (don't forget to buy your copy!)