END_OF_DOCUMENT_TOKEN_TO_BE_REPLACED

Creamy, hearty, and WAY better than canned, this New England style clam chowder is soon to be your family’s new favorite soup recipe!

New England clam chowder is an ionic and hearty soup that can be a little intimidating to make at home.  No more!  Even using fresh clams, this soup is a fun way to enjoy a favorite homemade soup that’s creamy, satisfying, and full of amazing flavors!!  Don’t want to use fresh clams?  No worries, I’ve detailed how you can make this with canned clams as well.

It’s officially cold fall weather here… perfect soup weather.  Clam chowder is an all-time favorite of mine… so creamy, flavorful, yet it still tastes fresh.  I got a little adventurous on this one (well, for me anyway), as I’ve never made clam chowder at home before, and have never steamed my own fresh clams… like ever.  I’m not a huge seafood person (I’m more of a chicken and beef gal), but I have a soft spot for clams… specifically, clam chowder and fried clam strips.

Our local grocery store didn’t have fresh clams, but luckily my husband works over near a crazy, awesome, grocery store called Jungle Jims.  LOVE that store.  He got us about 2 lbs. of fresh “live” clams, packed in some ice, and they hung out in my fridge for a few hours before steaming them. 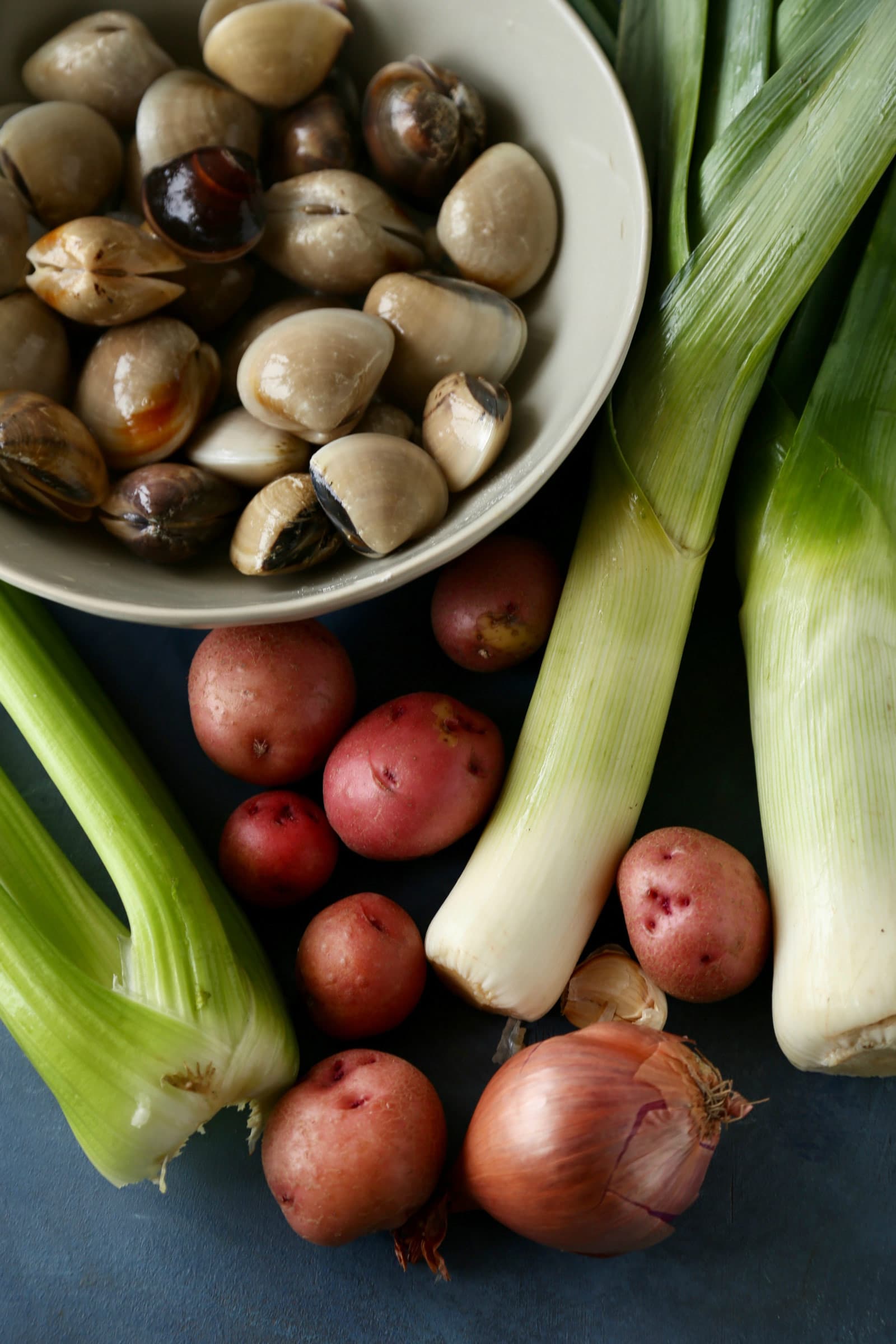 It’s actually super easy!  Granted, it’s an extra step and pan, but in my opinion, it’s worth it for the great flavor.  Just bring your clam ingredients to a boil, add your clams, cover them, and steam until they open up (took me about 6-7 minutes).  If one or two doesn’t open up, just toss those, they’re not good.  Drain your clams, scoop out the meat, and chop.  You can also steam and chop your clams ahead of time.  Just toss them in a little bit of olive oil and refrigerate… but I wouldn’t do that for too long, like a day maybe? 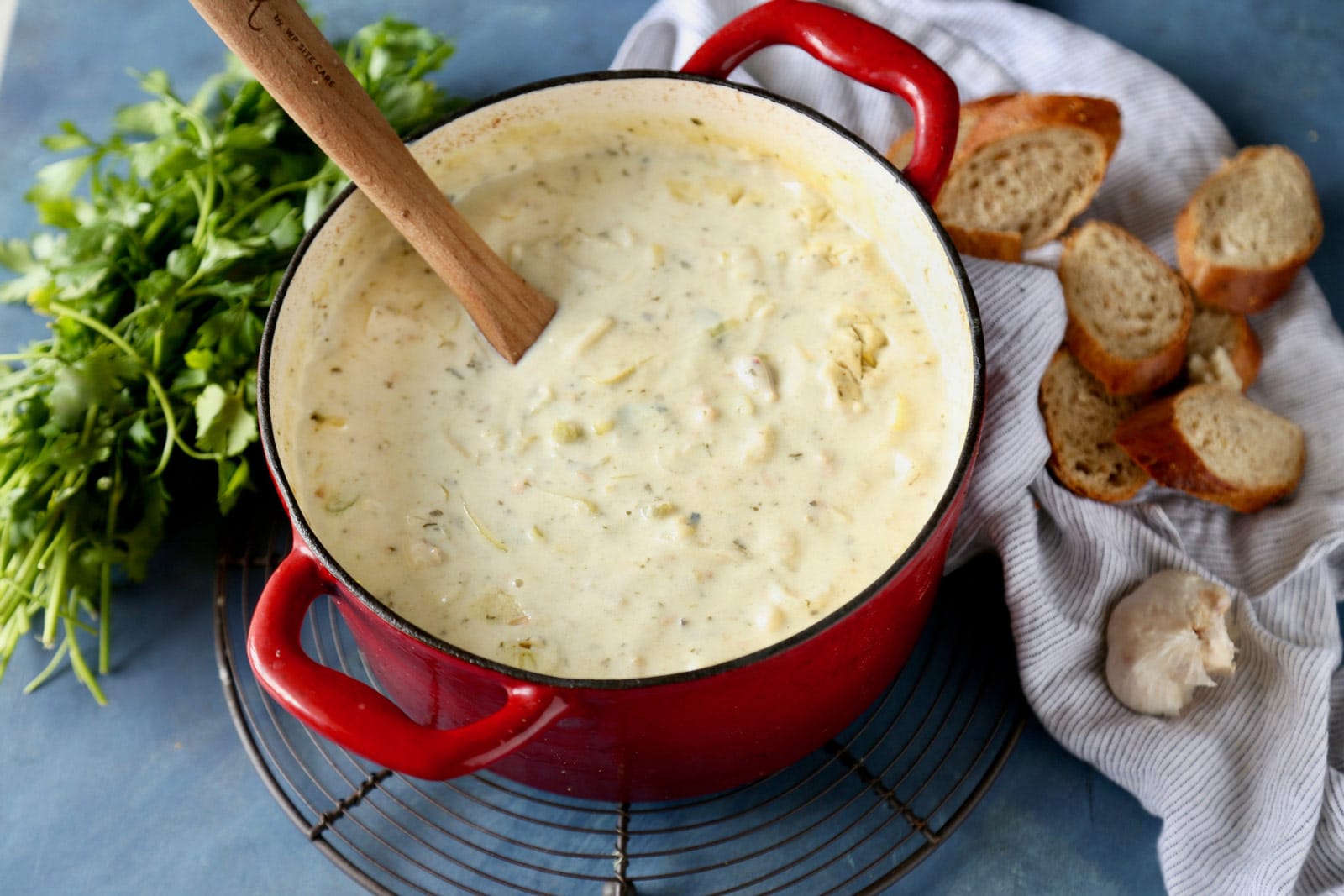 For sure!  Plus, they’re more readily available and more economical.  Down in the recipe notes section I’ve detailed how you can adapt this recipe to be made with canned clams, because, hey… we’re all busy, and sometimes, we really need a shortcut 🙂 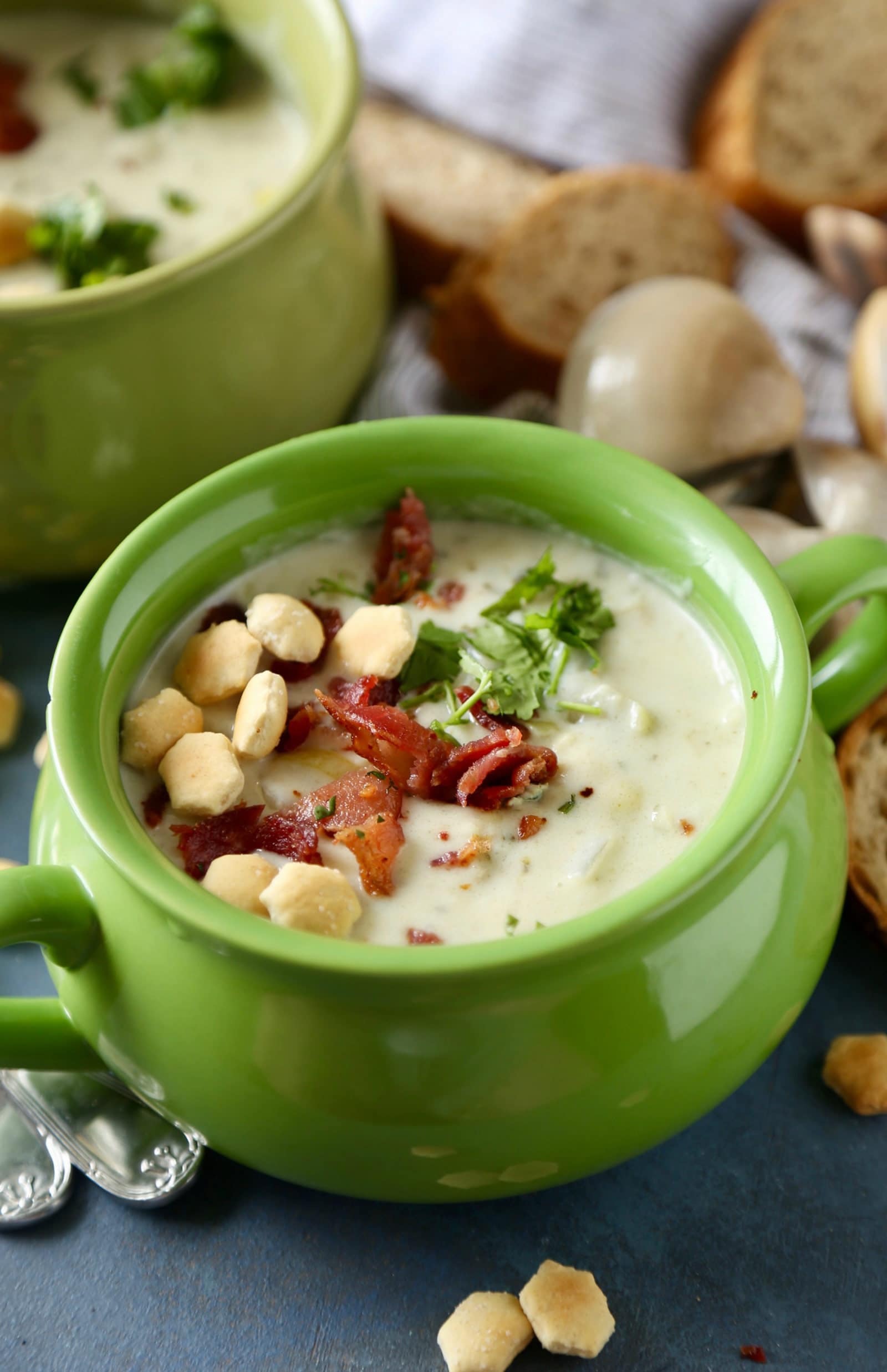 To me, no soup is complete without some great toppings and dippers.  So below are my favorite ways to top the chowder, as well as what to serve alongside. 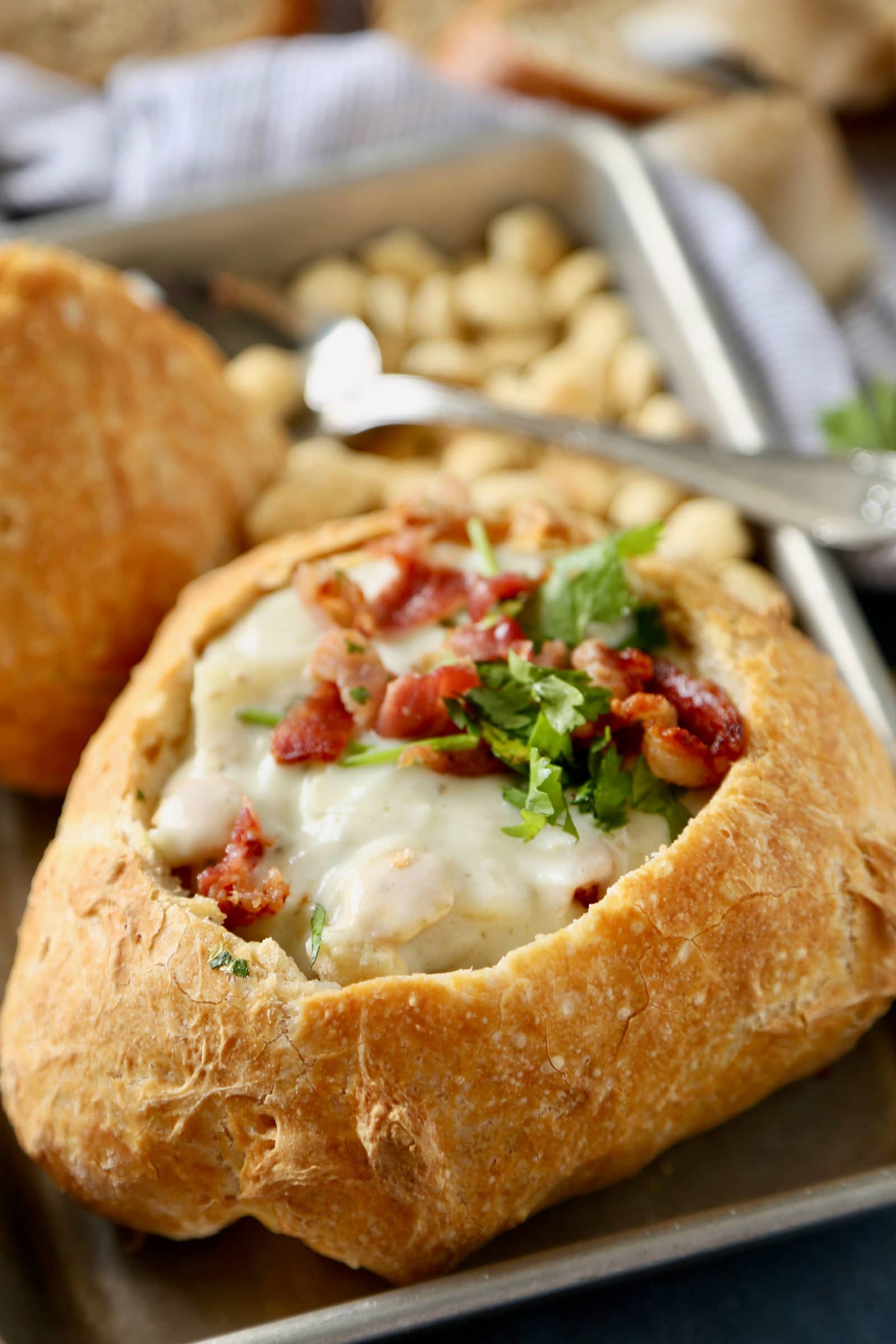 When you’re in the mood for something hearty and perfect for those chilly nights, give this homemade New England clam chowder recipe a try.  Once you try homemade, you’ll never want the canned version again!! 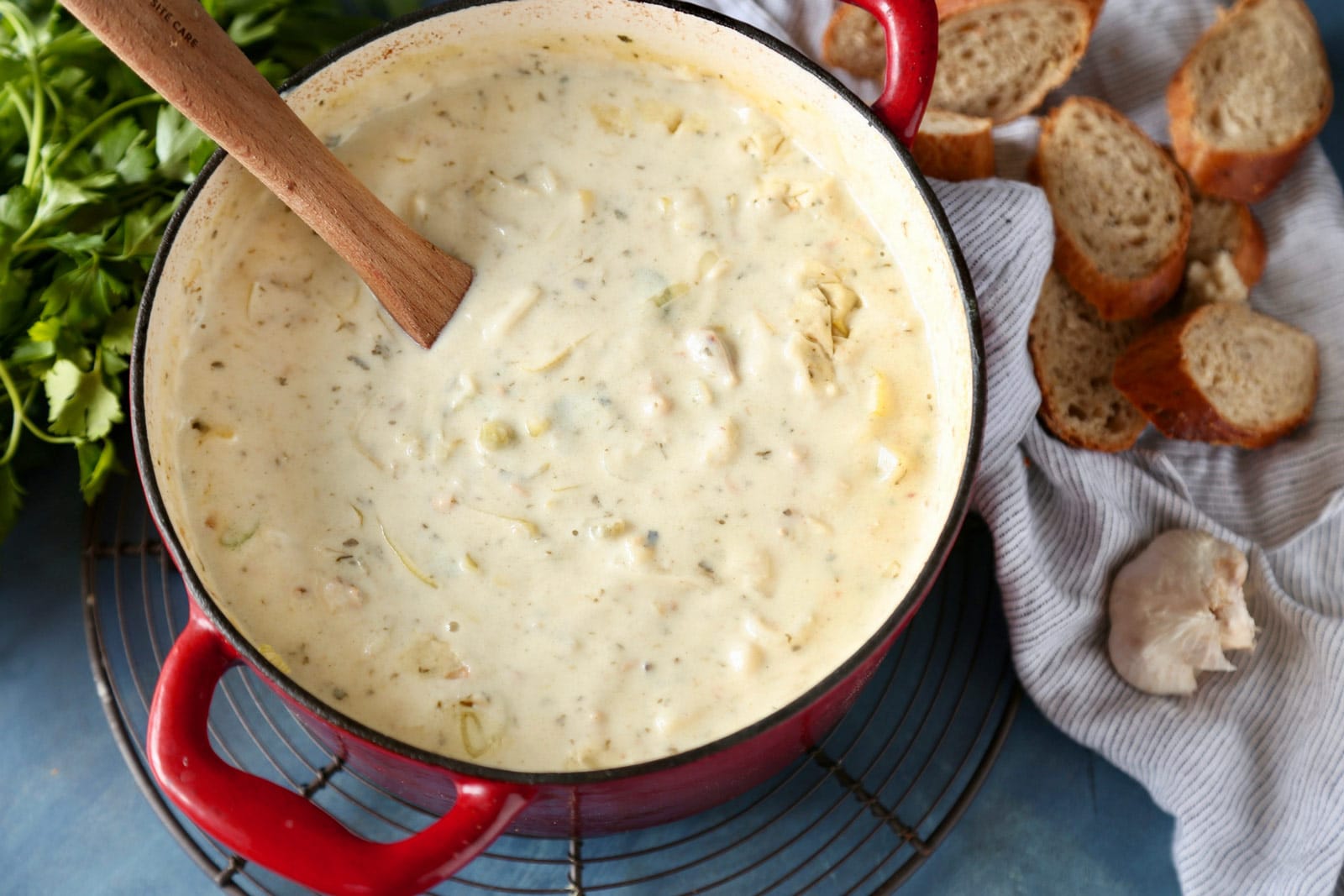 Recipe originally published in 2014 and has been updated with new photos added as well.

WANT TO TRY THIS CLAM CHOWDER?

PIN IT TO YOUR SOUP OR SEAFOOD BOARD TO SAVE FOR LATER! 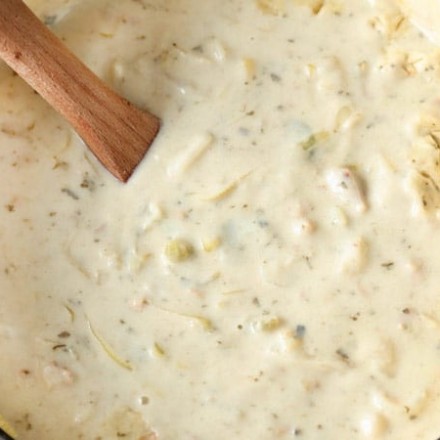 TO USE CANNED CLAMS: Replace fresh clams with 2-3 small cans of minced clams, omitting the steam clams section of the ingredients and instructions.
Did You Make This?Tag @the_chunky_chef on Instagram and hashtag it #thechunkychef so I can see what you made!
Tag on Insta! Leave a Rating Save for Later Saved!

END_OF_DOCUMENT_TOKEN_TO_BE_REPLACED

8 hours 5 minutes
END_OF_DOCUMENT_TOKEN_TO_BE_REPLACED
Send this to a friend