END_OF_DOCUMENT_TOKEN_TO_BE_REPLACED

Warm up in the most comforting way… a big bowl of this cheesy ham chowder, made easy in the slow cooker! Perfect for a busy weeknight!

Have some leftover ham?  This cheesy ham chowder is the most mouthwatering solution!  Even if you don’t have any leftover ham, it’s perfect to make on a chilly weeknight, and hearty enough to feed your whole family!

This post was brought to you by the makers of Promised Land Dairy. I received compensation to write this post through the Far From Ordinary Milk program. All opinions expressed are my own.

Okay I know that it’s not officially Fall until September 22nd, but it’s after Labor Day, which makes it unofficially my favorite season… Fall!  I can’t get enough of the comforting meals like this cheesy ham chowder.

On a chilly day, there’s nothing better than cozying up to a big bowl of thick, creamy chowder!  The best part about this version?  It’s made in the slow cooker!

Just add the first several ingredients to the slow cooker, cover and cook on low, and walk out the door!  When you come back home for dinner, all it takes is a mere 20 minutes before it’s 100% ready to go.

One thing I love about this ham chowder is that it’s deliciously creamy, but with no heavy cream!  Whole milk and some sour cream give it all the creaminess it needs, while also cutting down on fat and calories. 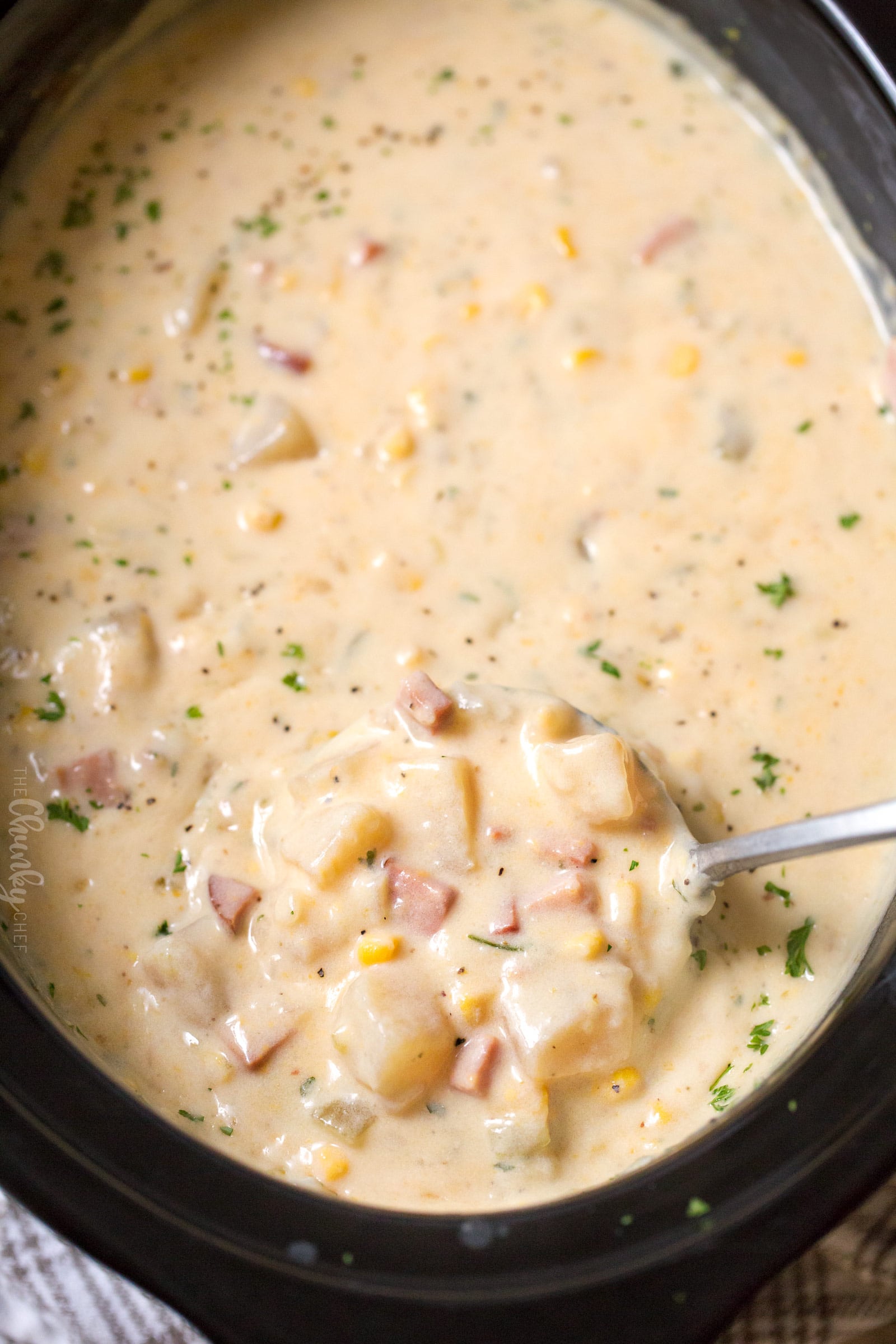 Over the next couple of months, there are a few holidays where you might serve ham, and inevitably have a bunch of ham leftover right?

I know every time I serve ham, I’m left with SO much.  After some ham sandwiches, and these puffs, I’m usually stumped as to what to do with all the leftovers.

That’s where this chowder recipe comes to the rescue!  It uses 4 cups of diced ham, so it’ll put a good dent in your leftover pile 🙂

BUT WHAT IF I DON’T HAVE LEFTOVER HAM?

Great question!  You totally don’t have to use leftover ham for this recipe.  Obviously it’s a great leftover idea, but not everyone serves ham and has leftovers right?

I like to grab some fully cooked boneless ham steaks from the grocery store and just cube them up.  In fact, that’s actually what I did for these pictures.

The only ham I wouldn’t use would be really thin sliced lunchmeat… it might disintegrate during the long cook time. 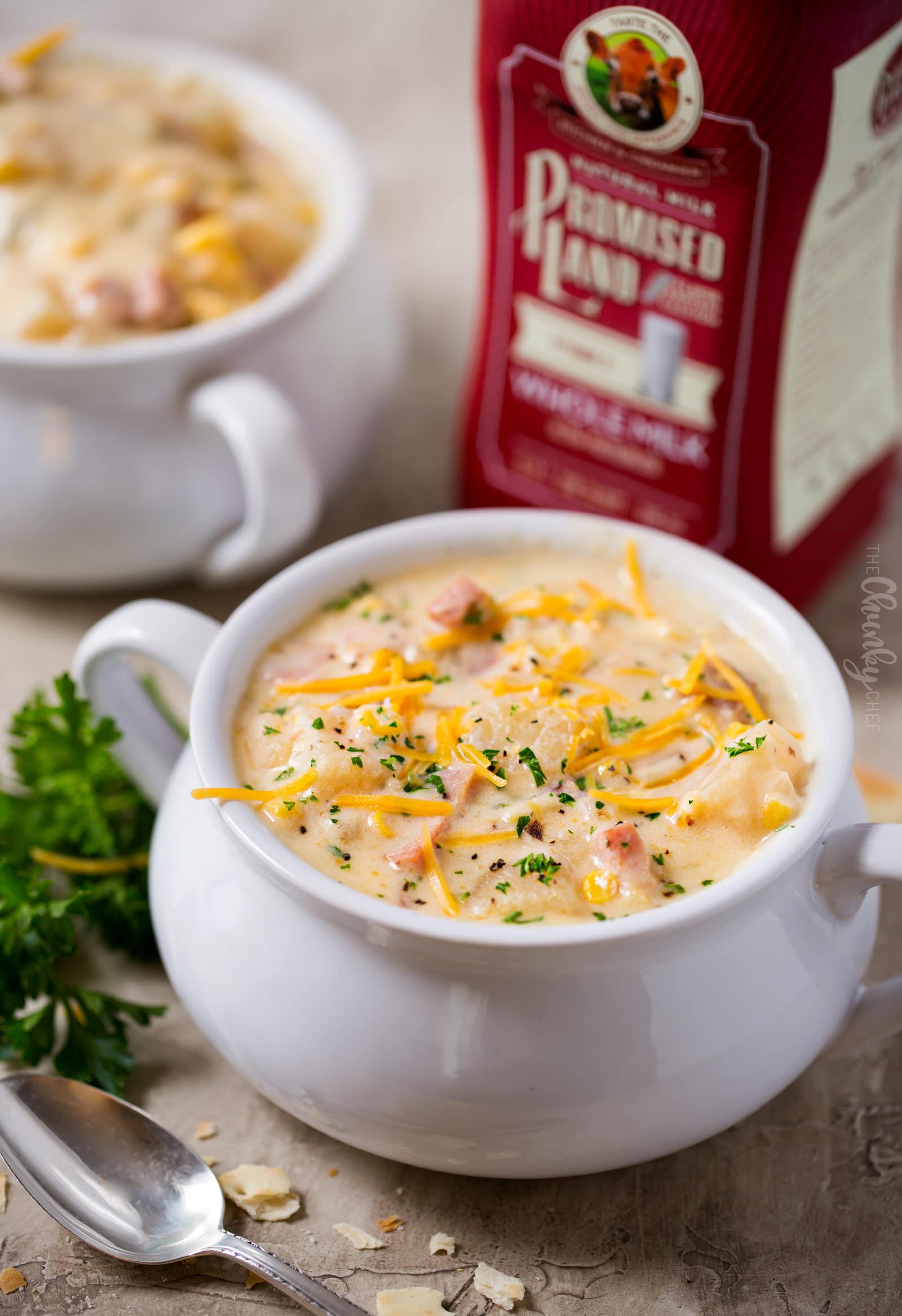 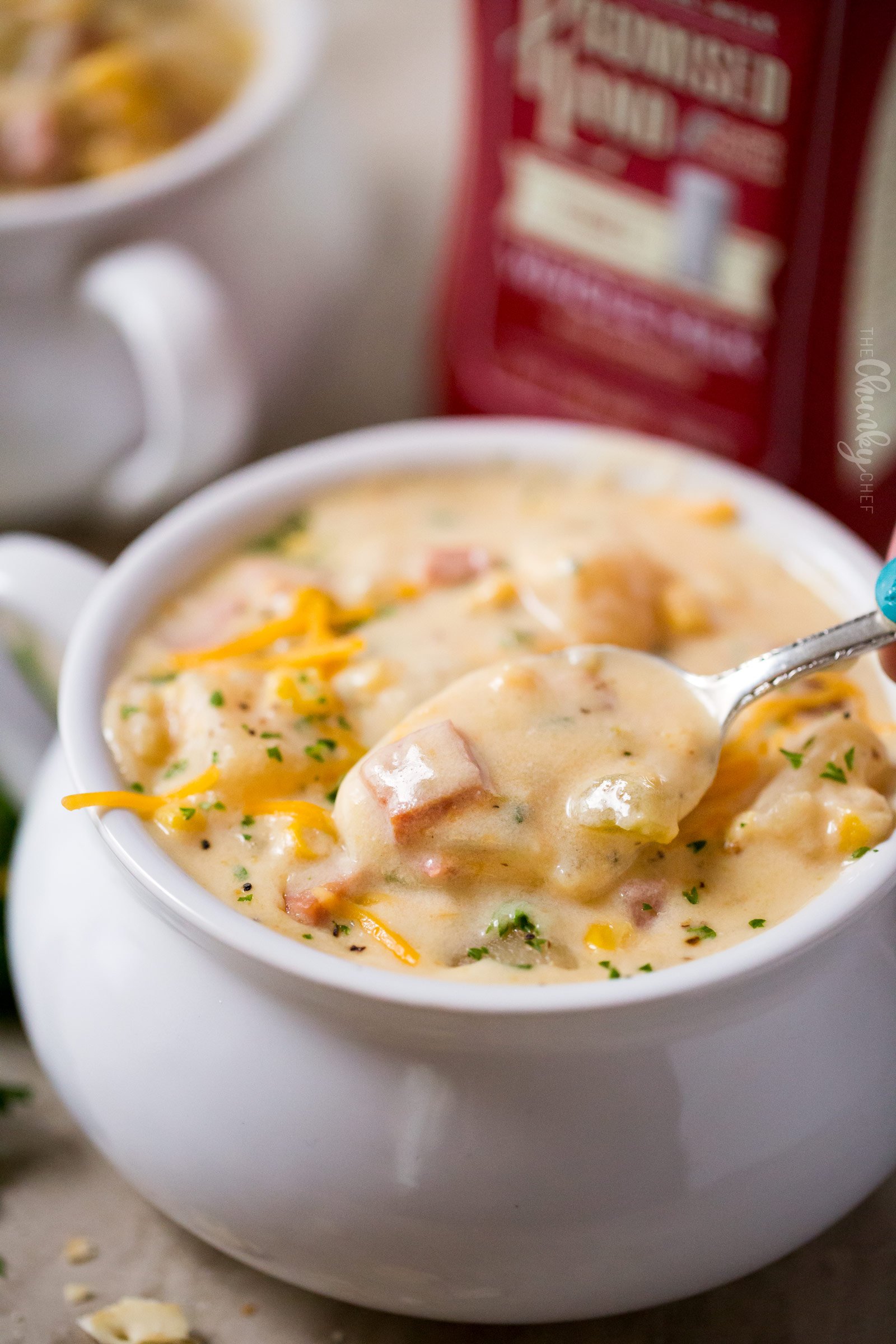 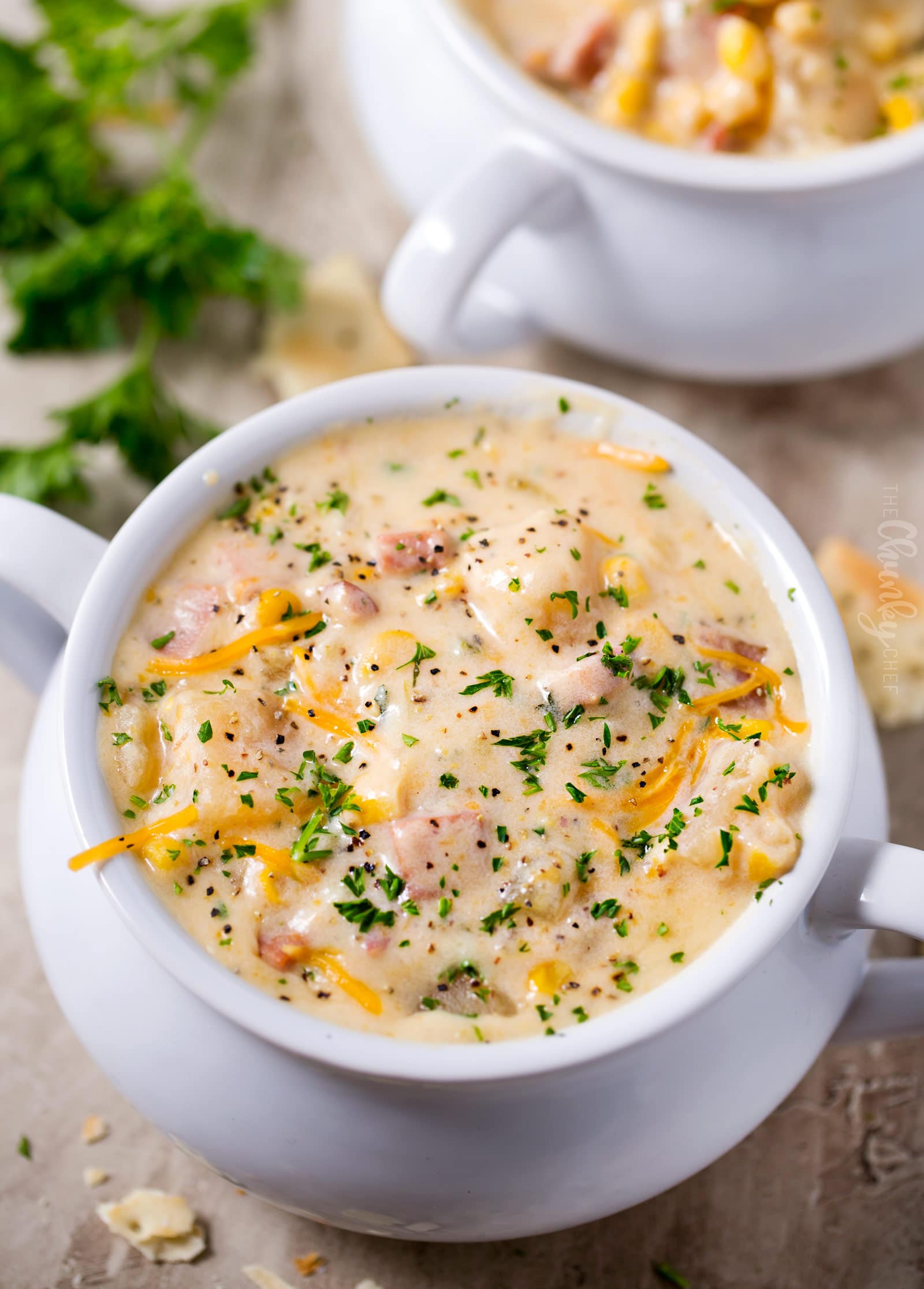 Grab some crackers, a spoon, and dig in!!  Also, we love to make this no knead bread to serve alongside… nothing beats it! 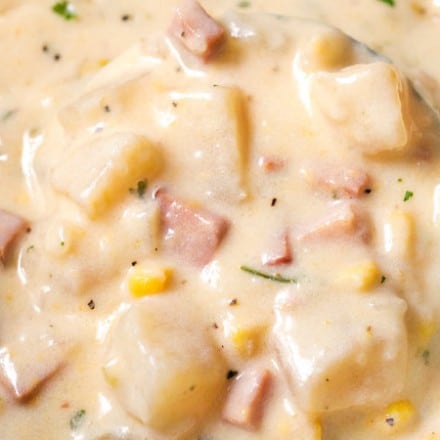 4.74 from 61 votes
Author: The Chunky Chef
Prep Time: 25 minutes
Cook Time: 8 hours
Total Time: 8 hours 25 minutes
Calories: 340
Servings: 10 servings
(hover over # to adjust)
Print Rate Pin
Warm up in the most comforting way... a big bowl of this cheesy ham chowder, made easy in the slow cooker! Perfect for a busy weeknight! 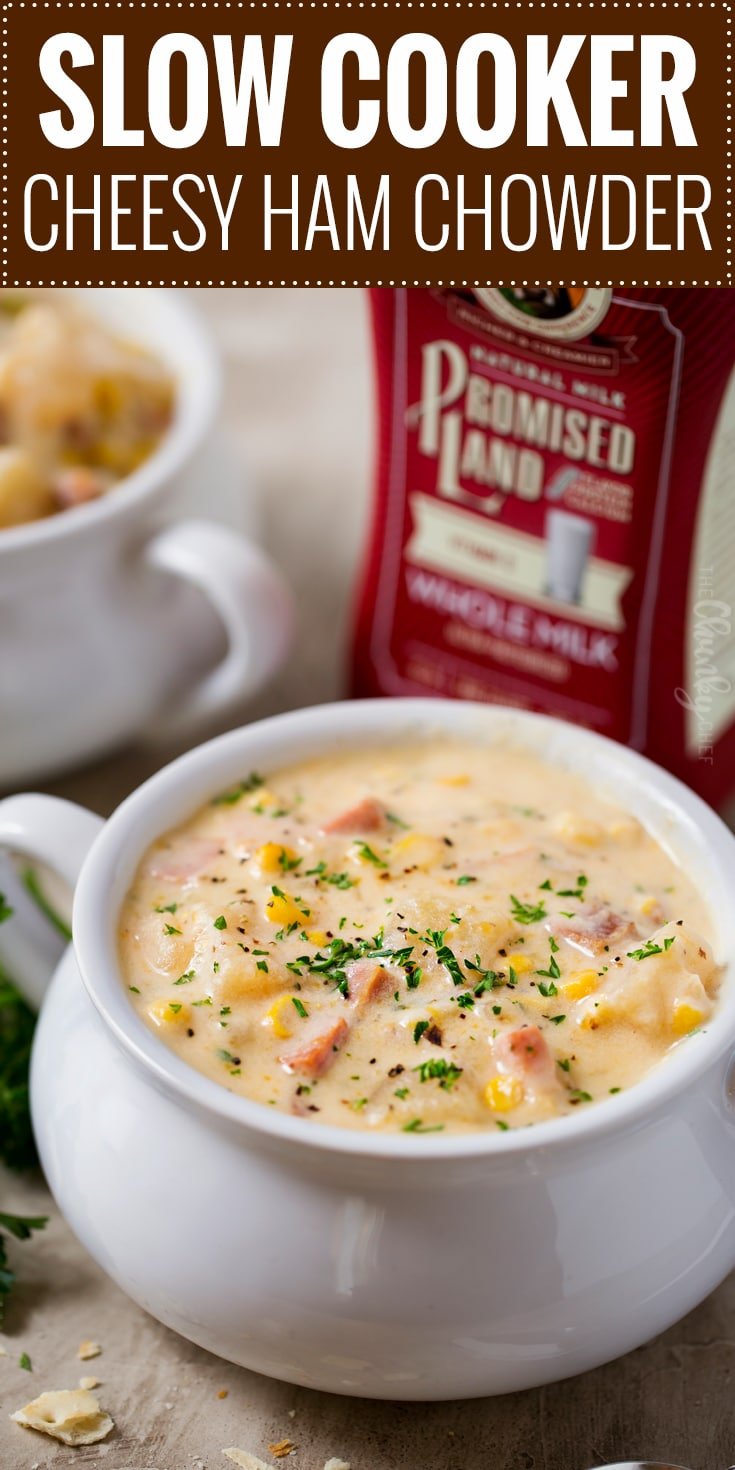