This roasted pork tenderloin is ready in a flash, and absolutely packed with great ginger, honey and garlic flavors! It’s a weeknight winner!

Stuck in a weeknight dinner rut?  Try this oven roasted pork tenderloin that’s marinated, seared, roasted and basted with plenty of the extra marinade for maximum flavor!  The best part?  It’s ready in less than 30 minutes!!

This post is sponsored by the Ohio Pork Council. All opinions are my own. 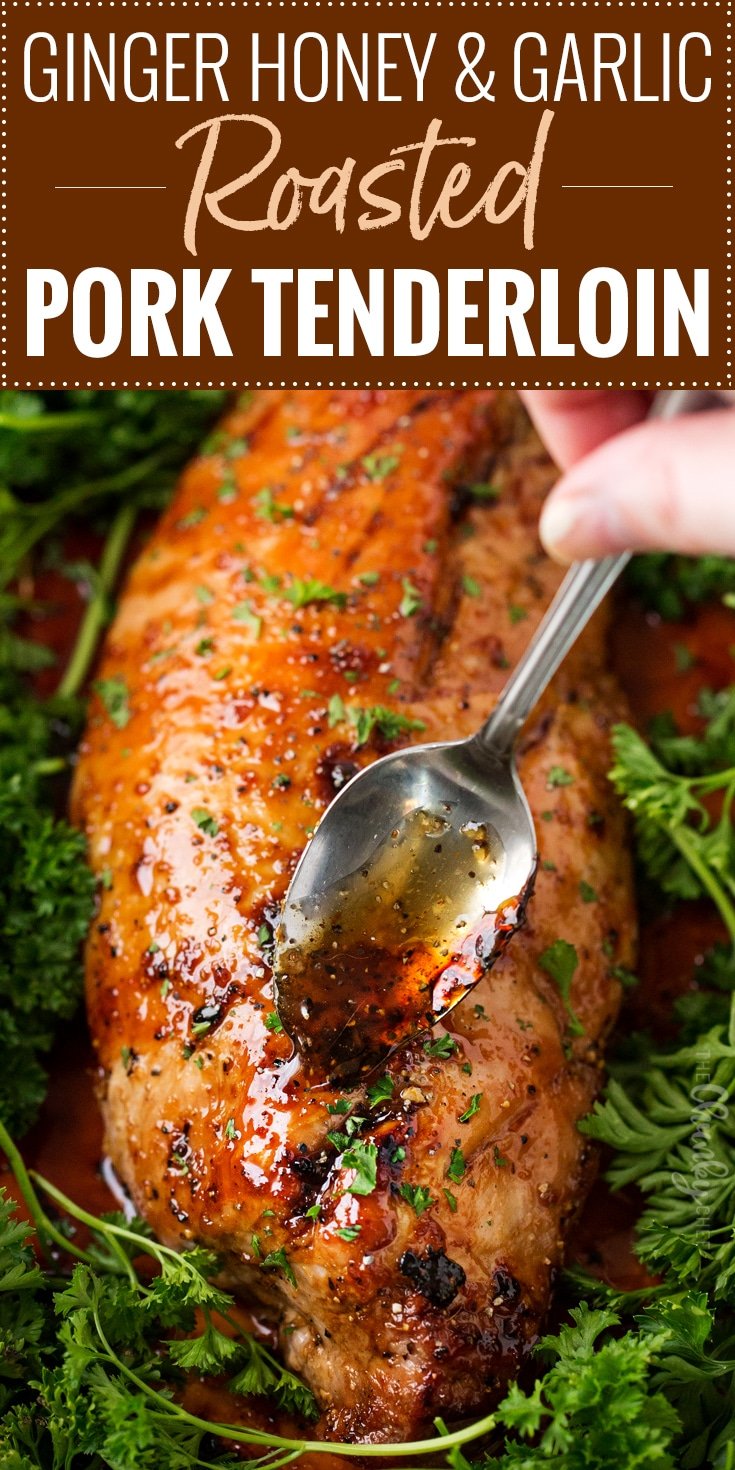 Are you all ready for a great less than 30 minute meal?  With school back in session, I am SO not in the mood for long, involved meals.  Even basic beef tacos had me dreading dinner time the other night.  My energy level is just. not. there!  Anyone else feeling this way lately?

When I plan out my meals for the week, I always ask for input from my husband and daughter (my son doesn’t get a vote since he literally lives on chicken nuggets, ketchup and pasta lol), and a lot of the time I get a, “I don’t care what the meal is, but just NO chicken!”.  We eat a LOT of chicken in this house you guys… and apparently, some family members are so over it.

I figured that I needed to choose something quick, easy, and healthy, so I went with a pork tenderloin!  Alright, confession time… before I created and tested this recipe, I had never cooked a pork tenderloin before.  I know… crazy right?!  Somehow I always thought it would be fussy or complicated, but in reality, it’s exactly the opposite!

IS THIS MEAL REALLY READY IN UNDER 30 MINUTES?

Yes indeed!  Well, marinade time not included.  But just toss the pork in the marinade in the morning, and you’ll be ready to go at dinner time!  The beauty of a pork tenderloin is that it’s pretty quick-cooking.  Plus, you don’t want to overcook the meat, so it doesn’t have to cook as long as you’d think. 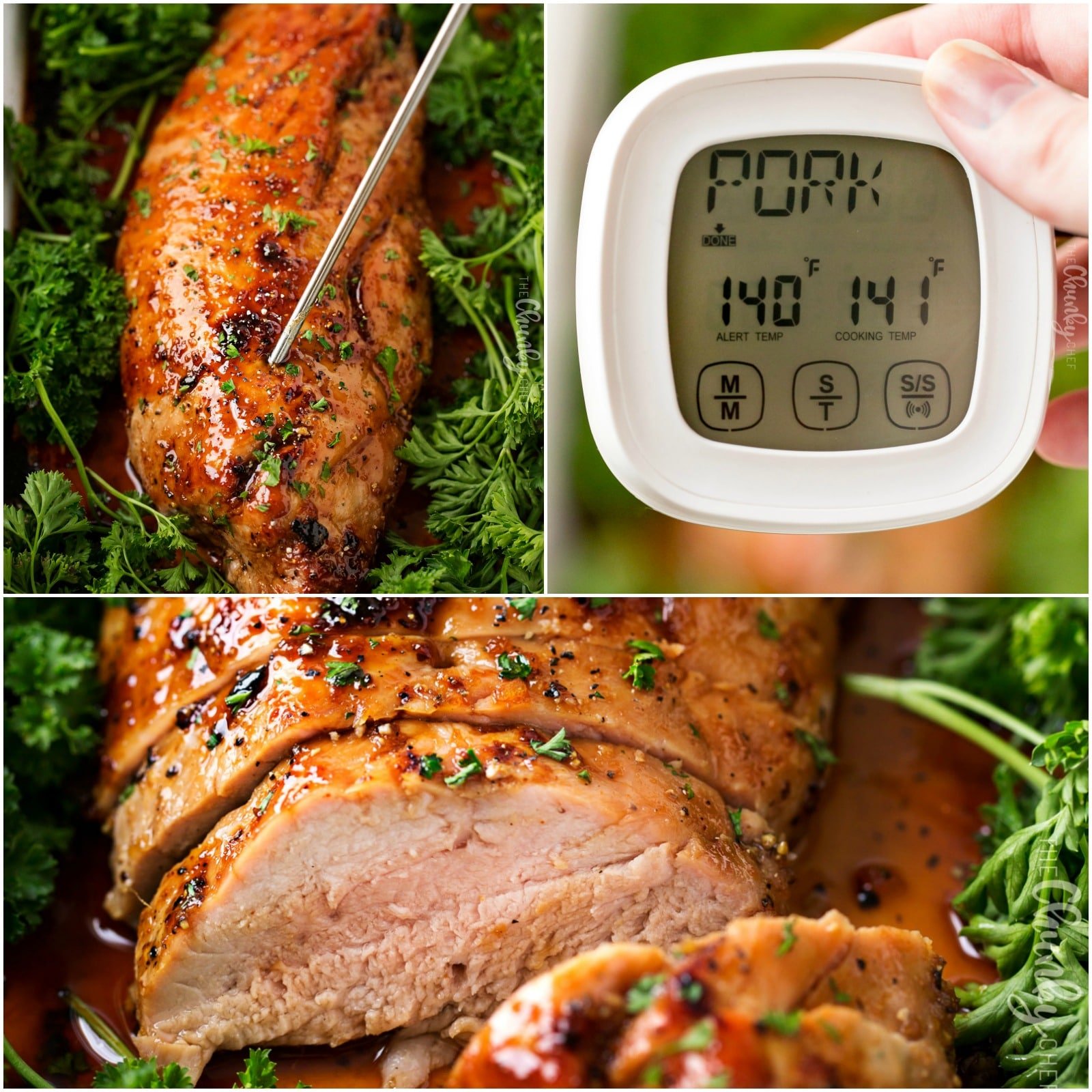 BUT… YOUR PORK IS KIND OF PINK!

It sure is, which is what makes it so tender and delicious!  Pork is actually supposed to be cooked to an internal temperature of 140-145 degrees F and have a blush of pink.  I pull my tenderloin from the oven before then, so it can broil and get that great glaze on top without going over the temperature and losing that great blush of pink!  I love to use my handy meat thermometer for this, because I can leave the probe IN the meat while it’s in the oven, and the device sits on my counter.  I can program it to beep when it’s at a certain temperature, so I don’t have to continually check and re-check.

Don’t let the pink scare you… it’s not like chicken where pink = bad.  I promise you’ll love it 🙂 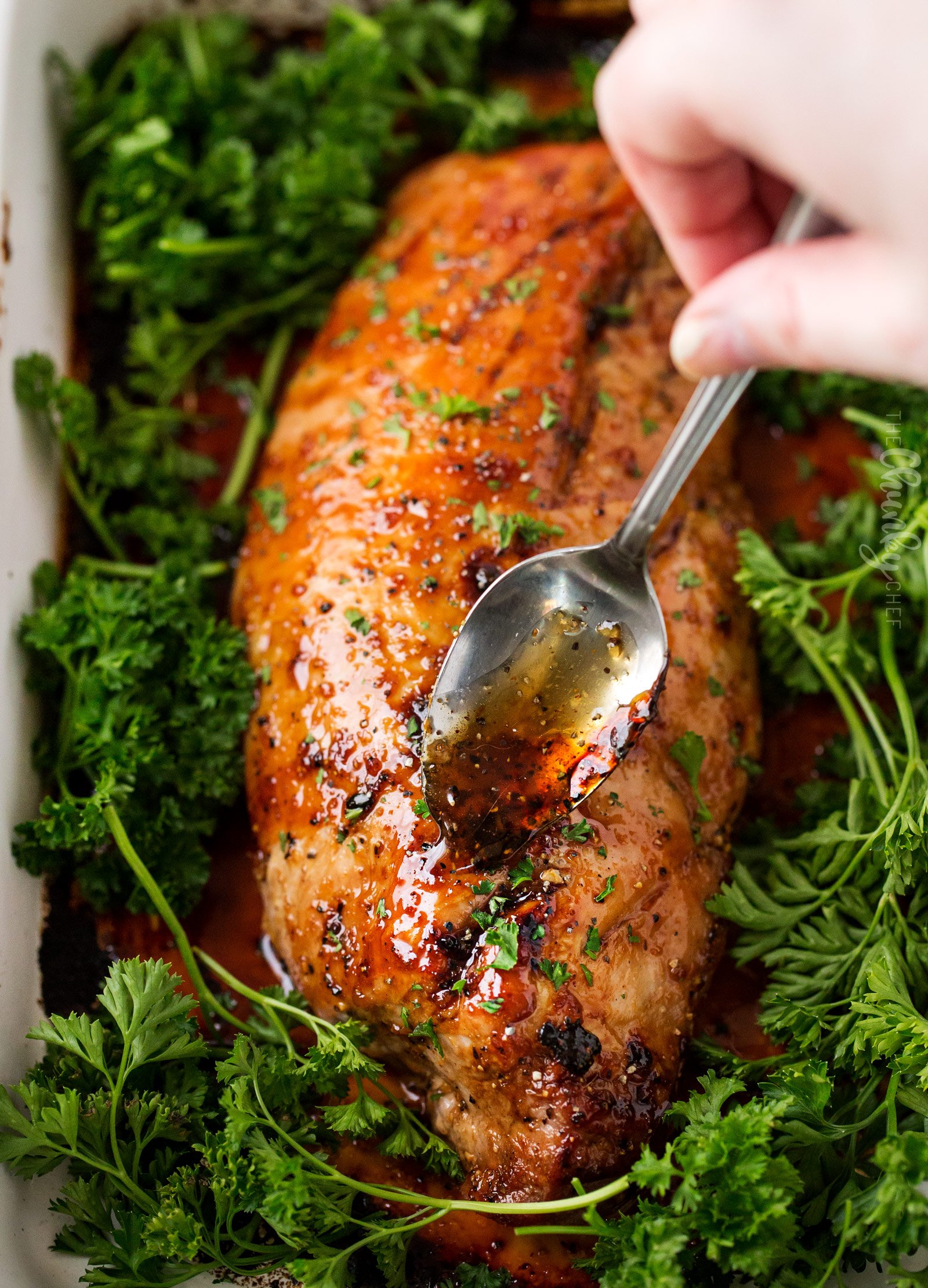 IS THIS PORK SWEET OR SPICY?

It’s really a perfect blend of sweet and savory, and the spiciness is up to you!  I add a pinch of cayenne to my marinade, but you can leave that out if you don’t like a little spice, or increase the amount to give it a healthy kick!  The great thing about pork is that it’s really a blank canvas, (like chicken), in that it takes on the flavors that you give it, so you can truly make this dish your own. 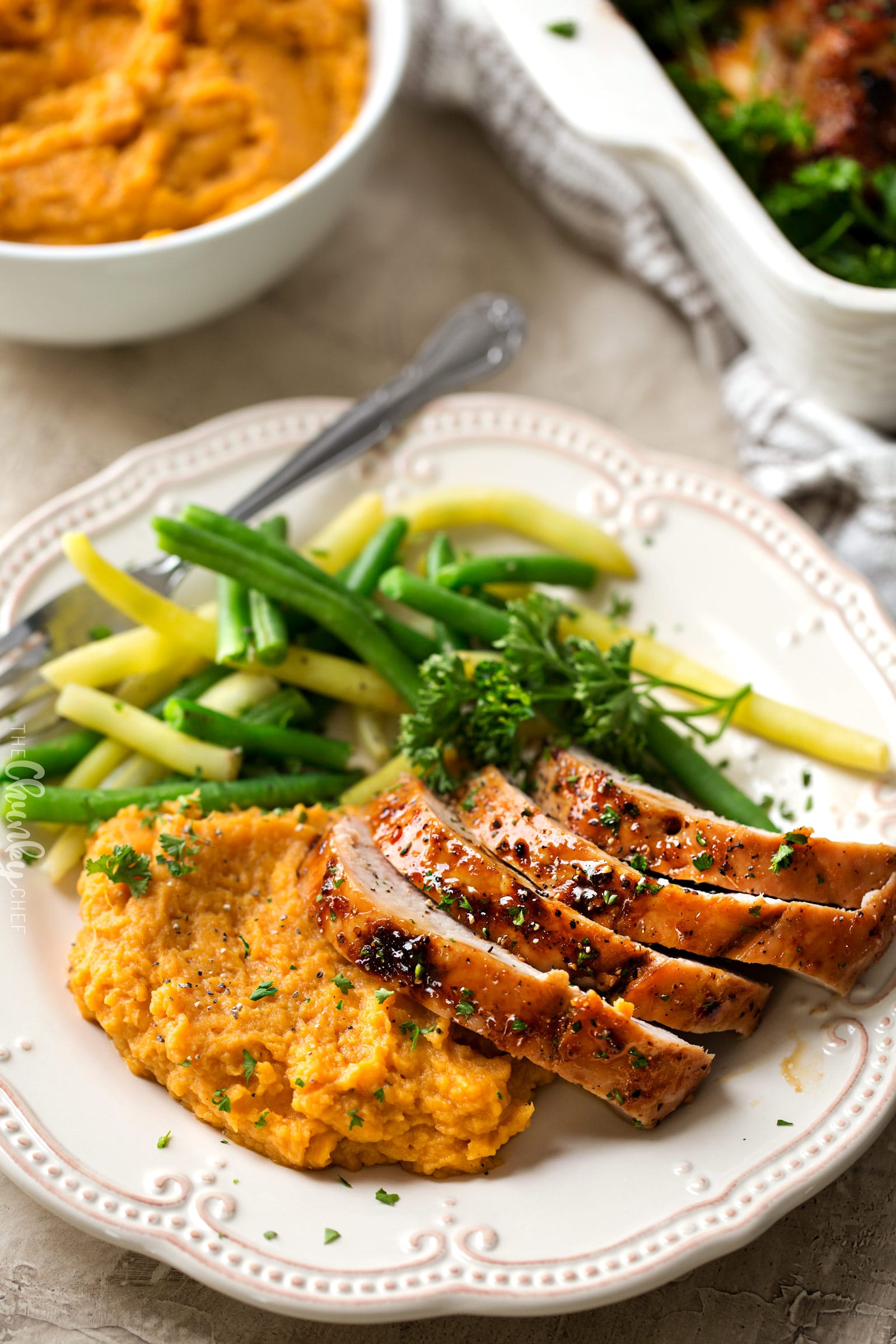 WHAT DO I SERVE WITH THIS ROASTED PORK TENDERLOIN?

Since it’s almost Fall, I went with a mashed sweet potato and some steamed green and wax beans.  BUT, here are some other delicious options! 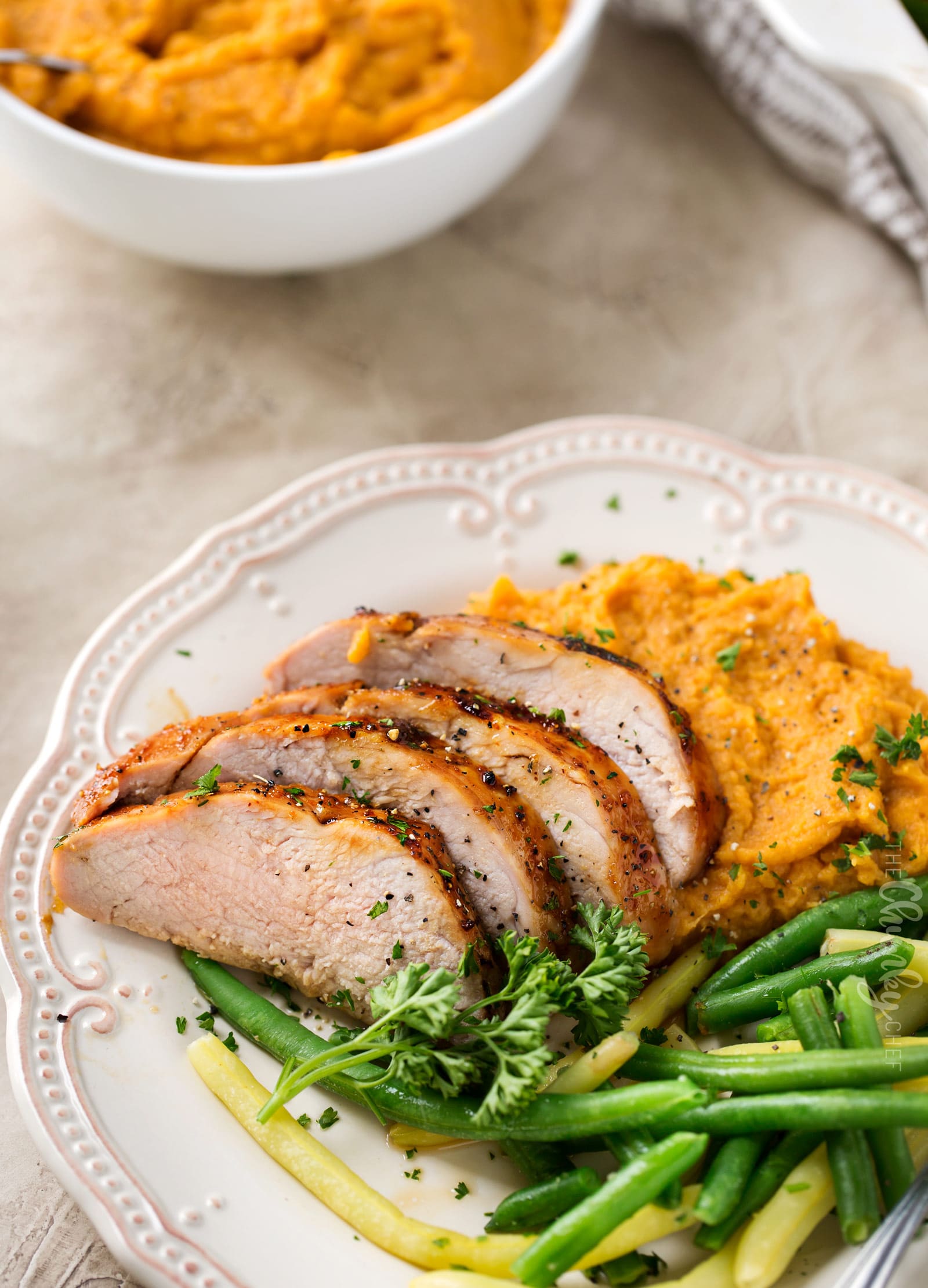 I really hope you guys give this ginger honey roasted pork tenderloin a try… I promise, it’s not complicated, and it comes together SO quickly!  Give it a try instead of opting for chicken (again), and I’m sure you’ll love it! 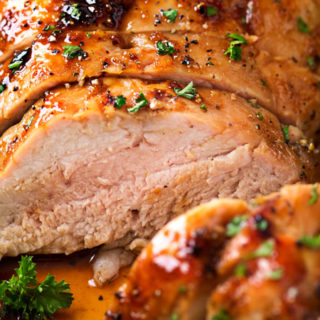 Prep time does not include marinating time, as this will vary from individual to individual.
Author The Chunky Chef
Tried this recipe?Mention @the_chunky_chef or tag #thechunkychef! 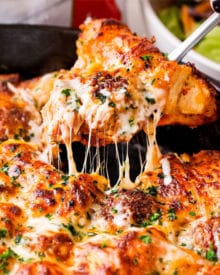 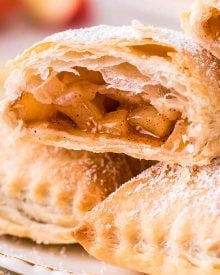 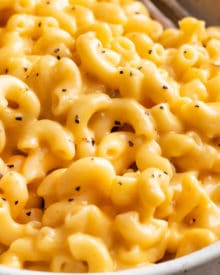