END_OF_DOCUMENT_TOKEN_TO_BE_REPLACED

This mouthwatering blondie recipe is so full of great Fall flavors, yet is delicious year-round!  Easy to bake, makes enough for a party, and is definitely kid-friendly! 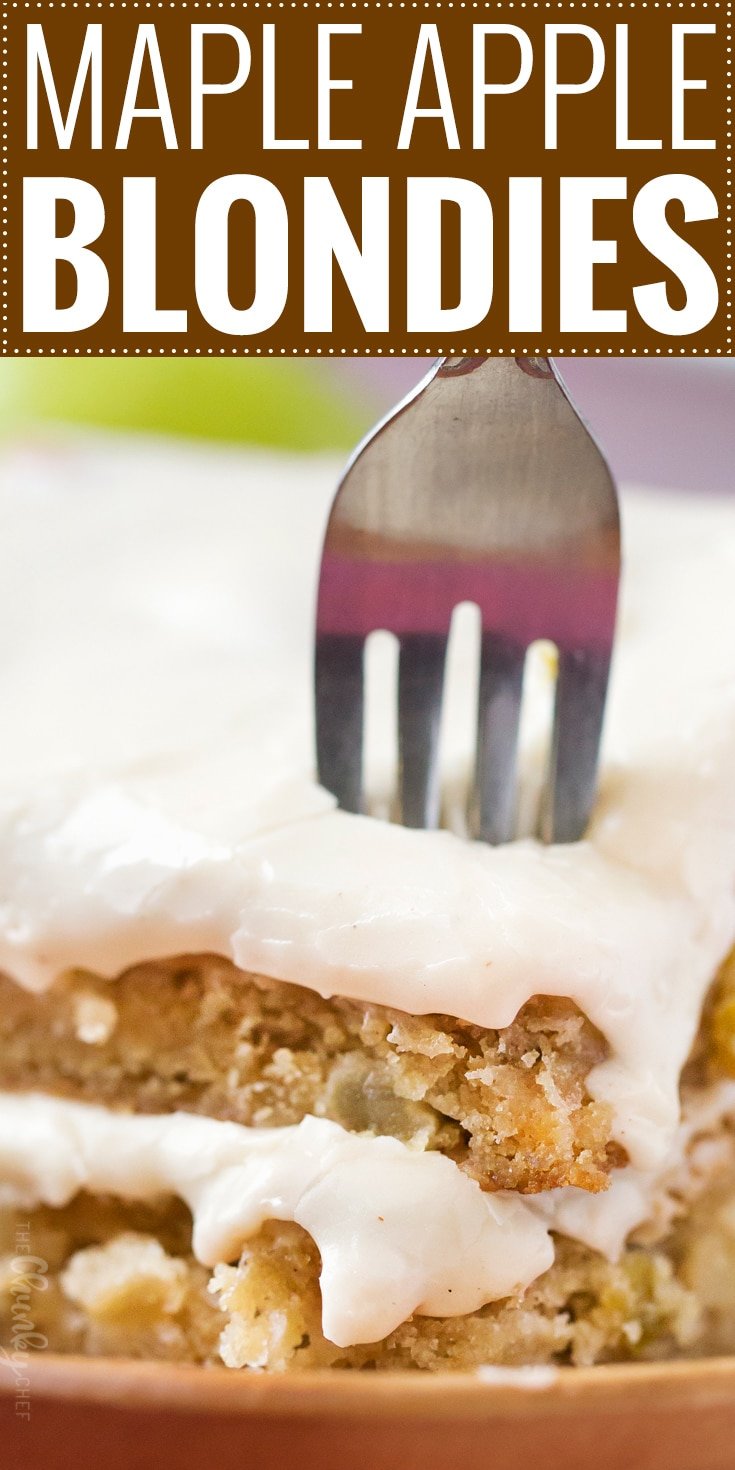 Ever since my daughter’s school started back up, I’ve been in Fall mode.  I’m done with the heat, and ready for all things apple and pumpkin!  I do love my pumpkin desserts, especially this 7 ingredient pumpkin butter, but I’m very partial to apple.  One of my favorites from last Fall were these caramel apple pie bars, which, OMG, you just HAVE to try… but I wanted to go for something different this year, and this blondie recipe fit the bill.

The sweet maple blondie base has a melt in your mouth texture, and is flecked with bits of softened cinnamon apple pieces.  Seriously like taking a bite out of Fall! 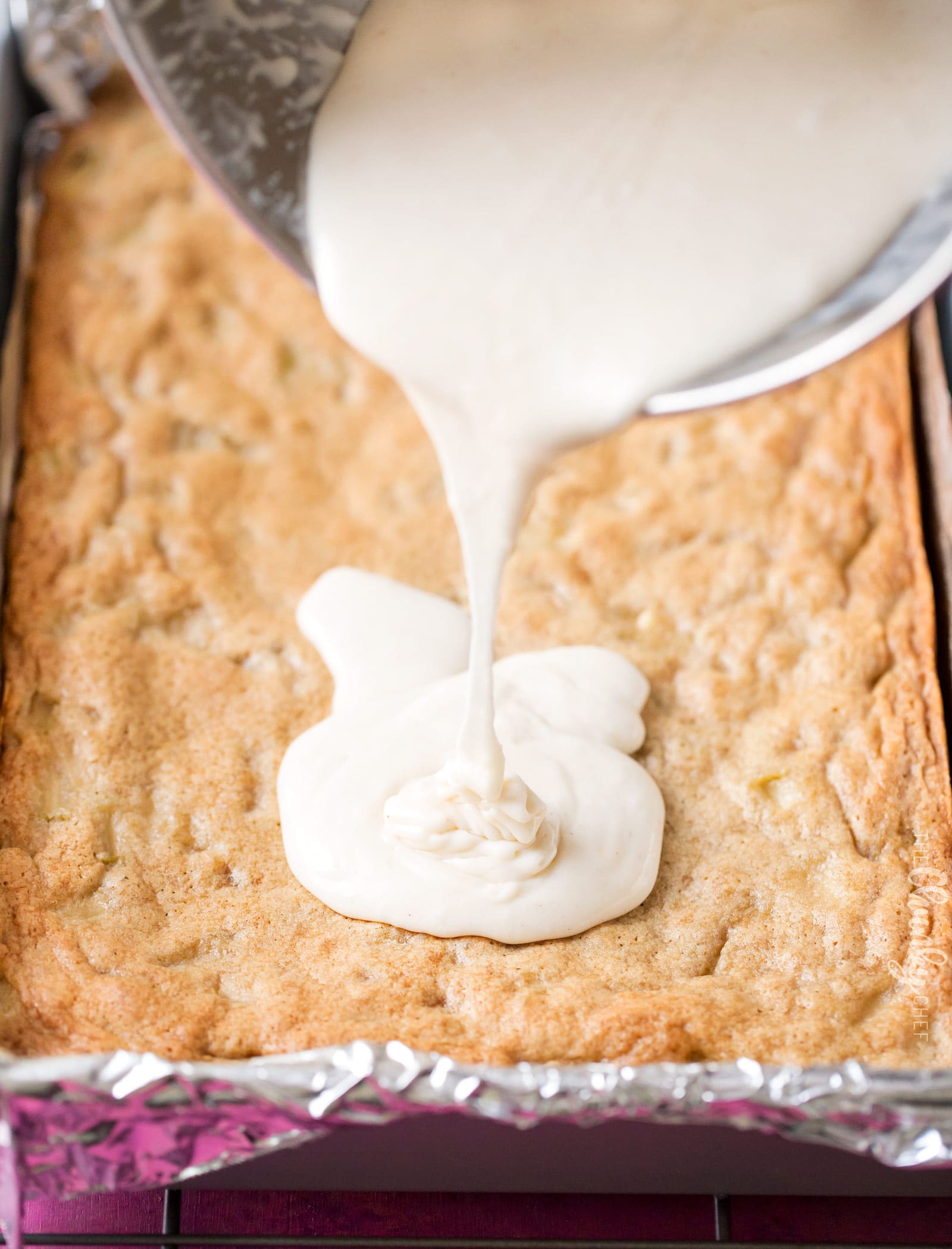 WHAT IF I’M NOT A HUGE FAN OF FROSTING?

Guess what?  You’re not alone!  I’m that person at parties who is nonchalantly scraping the frosting off of her piece of cake, and getting the sideways looks from people who think frosting is fantastic.  This is sort of a cross between normal frosting and a glaze, if that makes a difference 🙂  You can also halve the frosting recipe, so it’ll be thinner, use a drizzle of this browned butter caramel sauce instead, or leave ’em naked!  I’ve had them all three ways, and you really can’t go wrong with this blondie recipe. 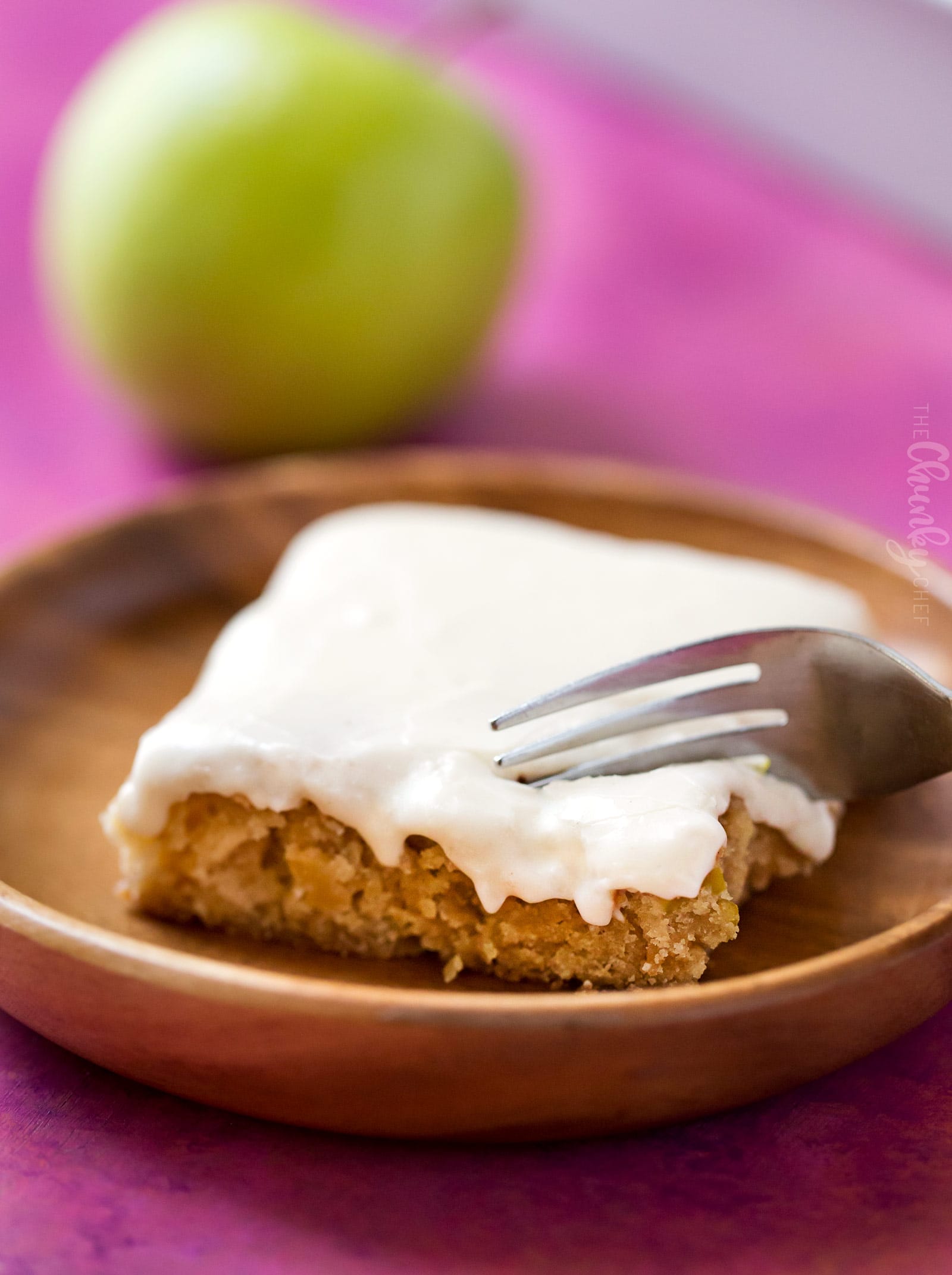 THESE BLONDIES LOOK PRETTY THIN, CAN I MAKE THEM THICKER?

You’re right, they are on the thinner side.  Blondies are supposed to be like a lighter colored brownie, which are traditionally thin.  BUT, if you absolutely must have a thicker bar, you could more than likely bake them in an 8×8″ baking pan.  I’ve never tested the recipe out this way, so I can’t say what the baking time would be… so I would bake them about 30 minutes, then start checking to see how done they are. 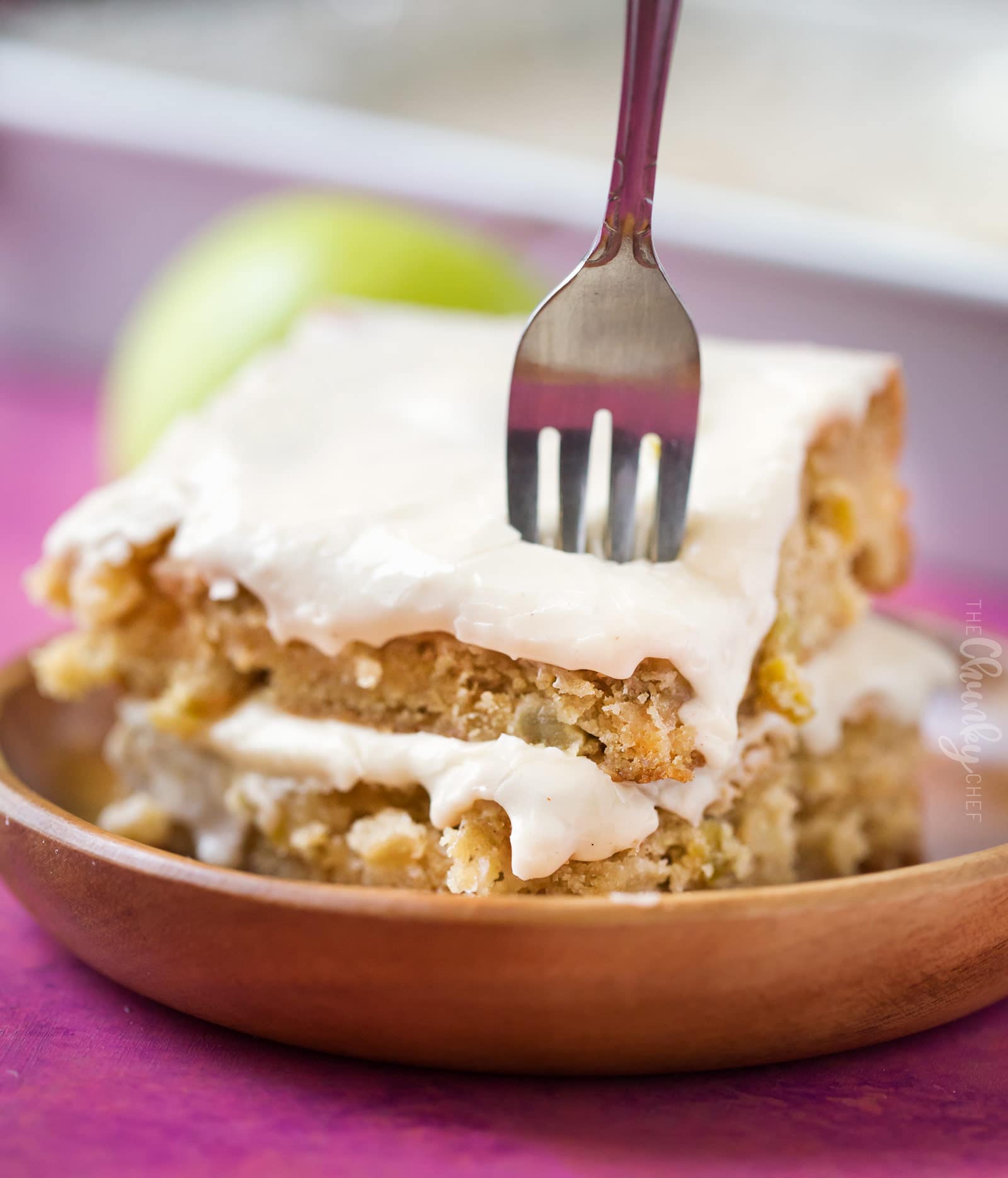 DO I REALLY HAVE TO USE PURE MAPLE SYRUP?

Of course you don’t have to… I’m not there baking with you, looking over your shoulder, but for the best taste, yes, use pure maple syrup.  Those plastic jugs of imitation syrup just won’t give you that amazing maple-y taste, plus they’re basically just colored corn syrup (gross man).  If you’re worried that any maple syrup you buy will go to waste after you make this recipe, here are some other recipes to use it up:

As you head into Fall, I hope you leave some room in your baking schedule to make this maple apple blondie recipe… I promise you that you won’t regret it! 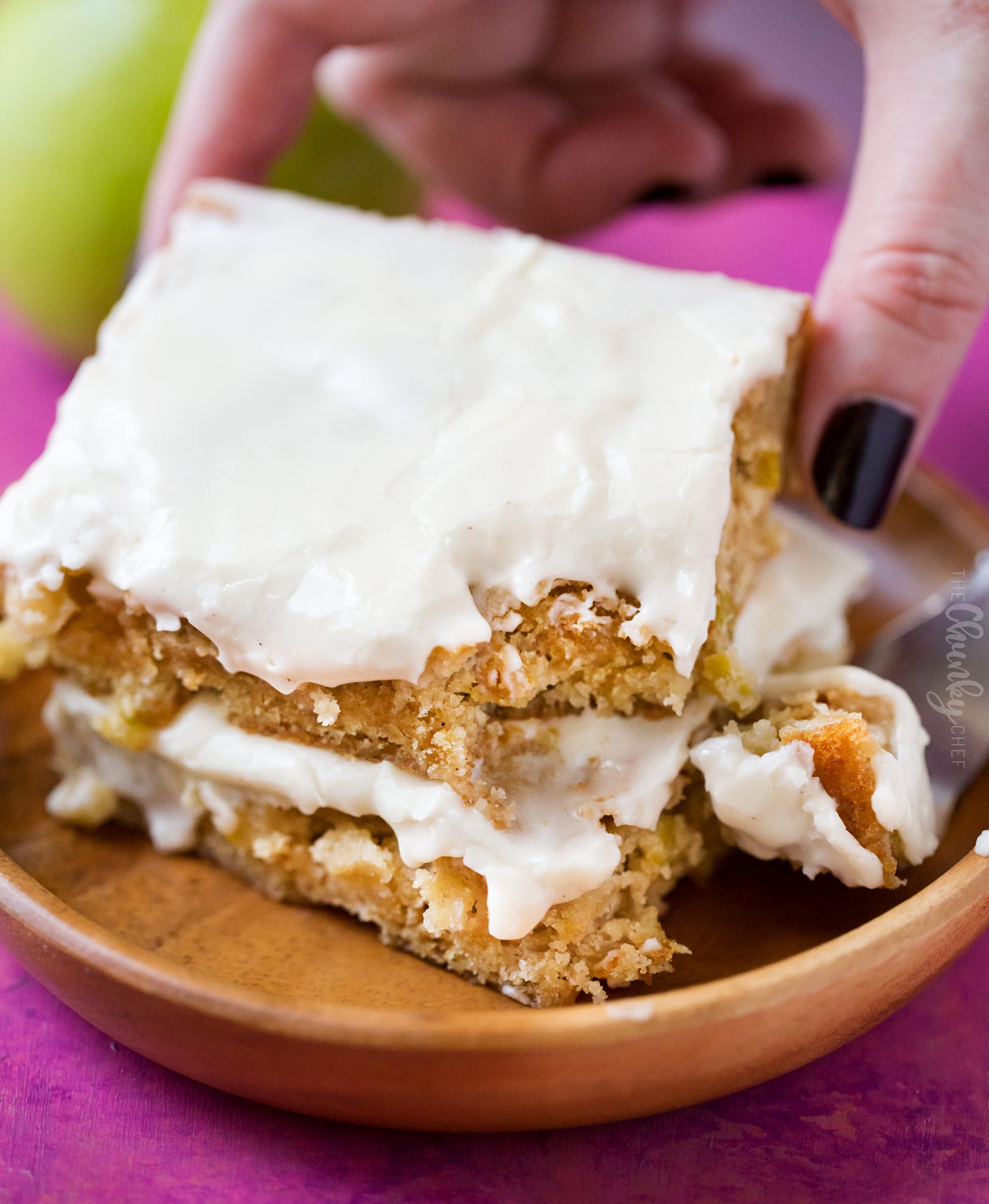 PIN THEM TO YOUR DESSERT OR FALL BOARD TO SAVE FOR LATER! 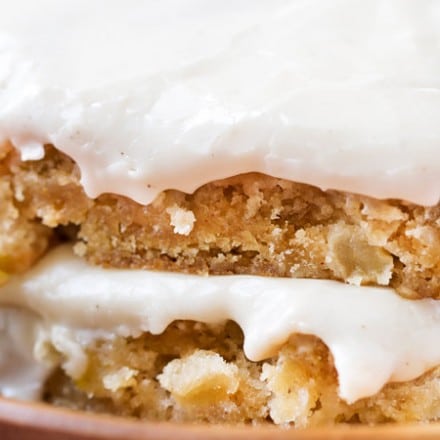 Recipe slightly adapted from Better Homes and Gardens
Did You Make This?Tag @the_chunky_chef on Instagram and hashtag it #thechunkychef so I can see what you made!
Tag on Insta! Leave a Rating Save for Later Saved!